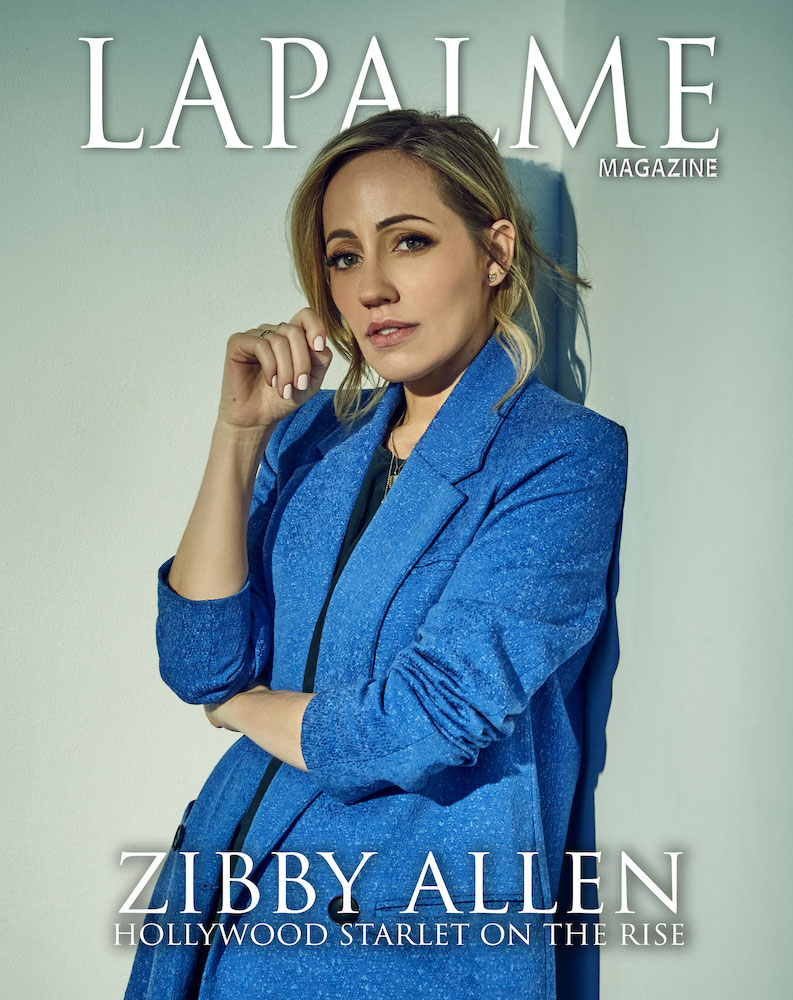 If you’re not familiar with the incredible Zibby Allen, now is your opportunity! Multi-faceted and anything but just an actress, Zibby is proving herself a force to be reckoned with in Hollywood.  With credits under her belt such as “Bates Motel,” “Grey’s Anatomy,” and Marvel’s “Agents of S.H.I.E.L.D.” to name just a few, you’ll next find her returning as Brie Sheridan in Netflix’s beloved series “Virgin River,” premiering its new season July 20th.   We had the chance to speak with Zibby about her work, what she’s looking forward to next, and the go-to glam essentials that she can’t live without:

You star as Brie Sheridan in the hit Netflix series Virgin River.  For those who haven’t seen the series, what can you share without giving away any spoilers?

I mean, if you haven’t seen the series yet, you’re in a sweet position because you’ve got four whole seasons to binge back-to-back without having to wait months and months in between!  So, you’re welcome. Haha!

The show is a (mostly) feel-good romantic drama set in a small town in Northern California. It’s based on the romantic novel series, Virgin River, written by NY Times bestselling author, Robyn Carr. Some of my own early comfort shows were Gilmore Girls and Parenthood… I’d say this show has a similar heartfelt relatable tone, but maybe with a slightly steamier edge when it comes to the drama and romantic storylines … particularly with my character Brie.

Brie Sheridan is sister to Jack, the show’s leading man, played by the wonderful Martin Henderson. When Brie arrives in Virgin River (starting season 3), she’s carrying a very painful secret about her recent past and is working very hard to avoid her own feelings of trauma. In doing so, Brie gets caught up in a very sultry relationship with the town’s bad-boy, Dan Brady (played by Benjamin Hollingsworth) much to the chagrin of her brother Jack whom Brady has an unsavory and unresolved history with.

Without giving any spoilers, eventually, Brie’s secret catches up with her and, in a very meaningful and poignant way, we watch her navigate that reality. It’s a reality that women all over the world face on an all-too-frequent basis, so I’m honestly very honored to be able to carry that part of Brie’s story. And I’m glad the writers of Virgin River are willing to go there…

Would you say you’re anything like your character? What was it that drew you to this role in particular?

I think in some ways we are very similar. It’s unavoidable really – I think of any role as a collaboration between myself and the character, you know? So the result is always a melding of both, probably. That said, the differences between me and the characters I’m asked to play are the most interesting pieces to me. Every role seems to point me to aspects of myself I didn’t know were there or that I don’t tend to express in my Zibby day-to-day.

In the case of Brie, she has this unwavering strength and determination that I admire (and envy.) She’s an achiever, she’s strong-headed and she’s determined not to feel like a victim in life. In theory, I’d like to think I’m the same… but really, I’m probably far softer and hesitant about life than she is.

Of all of the roles, you’ve played to date, which has been your favorite? What would your dream role look like?

I get asked this question every now and again and I never have a great answer.  I fall in love with every role I play. I’m a bit of a monogamist in that way. Even long after a job is done, I carry a forever-fondness for that character. I feel like I’d be cheating on Brie if I named any other role right now! Ha! But I do truly adore playing Brie. It’s been such a treat to go on a long-form ride with this show.

As for a dream role, it’s hard to say! In a way, I think roles choose me… they come into my life at a time when I need a little bit of what they’ve got, even if I don’t realize it at first. So I tend not to fixate on what the dream scenario is. I’d rather let the dream scenario unfold. That said, I fantasize a lot about creatives I’d love to collaborate with. For instance, I’d kill to work with Shonda Rhimes again. She’s a brilliant creator. I adore everything she does. Shonda gave me my first television role on Grey’s Anatomy a gazillion years ago, so my little loyal heart keeps Shonda in a special admiration chamber. I’d also die to work on anything Vince Gilligan and Peter Gould create. Those gentlemen are storytelling prodigies (Breaking Bad, Better Call Saul, The X-Files.)  I’ve always been so drawn to their work and the actors they cast. Similarly, Noah Harpster and Micah Fitzerman-Blue are creating some incredible material right now. Their train is one I’d be so very stoked to be on…

You’re also an accomplished musician in a band called Socks & Chimes.  What do you love most about making music?

My favorite thing about making music is that I don’t have to wait for anyone else to make it – I don’t need to audition for it, I don’t need a script or a scene partner – I can just make music when I have the impulse. I can’t say I’m a particularly skilled musician (I am not!)but I love being able to create a sound that matches a feeling that I maybe can’t quite articulate any other way.

I picked up that ukulele a few weeks after the tragic loss of my brother, Hunter, 12 years ago. In those early days, the grief I was experiencing kept me up at night. I think I had insomnia for the better part of a year after his death. So, late at night, when the feelings consumed me most, and there was no one to call, I’d watch ukulele lessons on YouTube. I learned to play just enough to create little songs that helped me express what was there. It remains a very soothing form of creativity for me. My bandmate and dear friend, Ian Merrigan, is an actual skilled musician. Pretty soon after I started playing, Ian and I discovered a musical chemistry that, when paired with our soul connection, seemed to produce these whimsical, simple songs. We adore singing together.

I feel like it’s been eons since I’ve had a red carpet event because of the pandemic! I can’t wait to get glammed up again for an event, any event!

I think glamour comes down to a feeling, which is specific to the individual. When it comes to myself, I feel my most beautiful with a fairly clean, natural look. As much as I swoon over a bold lip, or a sexy cat-eye on other people, I never seem to fully feel like myself when I go for those bolder makeup looks.  So my process for getting red-carpet ready involves getting lots of sleep the night before, drinking a ton of water, making sure my skin is clean and healthy, and that my “glam team” knows to keep it simple and honest. I used to feel a lot of pressure to add more, be more, and go all out… but I’ve learned over time that when I stick to what feels most authentic to me, I walk the carpet or attend these events with the most confidence.

How would you describe your everyday style? Any particular designers or trends that you’re loving right now?

I like my wardrobe to feel effortless and functional while still finding ways to flatter my figure and keep it sophisticated. I love pieces that are timeless and can be paired with multiple items in my closet. I’m also very interested in eco-friendly fashion. A few brands that I have major crushes on right now: Sézane, Reformation, Aday, and Christie Dawn! Sustainable fashion is truly the way forward and I’m so impressed with these brands who are out there managing to make really gorgeous clothing while keeping it ethical. I also just discovered a company called Von Holzhausen. They’re on a mission to replace all the animal leather in the world with non-animal leather. Their handbags are gorgeous. Can’t wait to get one of my own.

You’re quite the advocate for wellness and skincare.  What’s your go-to routine and what is the one product that you can’t live without?

I’ve been on a journey with my skin. I’ve nailed down a really great combination of supplements/diet and skincare products. My everyday product routine involves a thorough face wash (Skinceuticals Simply Clean is my fave), a vitamin C serum in the morning (Vichy LiftActive is amazing for my skin), a moisturizer of course (currently obsessed with Clinique’s Moisture Surge), and a sunscreen (Elta MD is hands down the best daily sunscreen I’ve ever used!) These days I cannot live without Shani Darden’s Retinol Reform, and her facial sculpting wand. I use both nearly every night and it’s made such a difference to the texture and tightness of my skin.

When it comes to life and the journey you’ve traveled, what has been the greatest lesson you’ve learned so far?

If I’m being true and authentic to myself, it’s not going to look like anything or anyone else’s. At least not exactly. It’s an important and comforting truth to remember when I’m out there suddenly comparing myself to someone else’s journey/looks/career. Coming back to myself, my inner authority, the beat of my inner drum is where my freedom lies. Always.

What’s next for Zibby Allen?

I’m back filming Season 5 of Virgin River and I’m already so, so, so excited about what this season has in store for Brie and all the beloved characters of Virgin River!

I also star in a Lifetime thriller called Lies Between Friends that airs on July 30th in the U.S.! So keep an eye out for that.