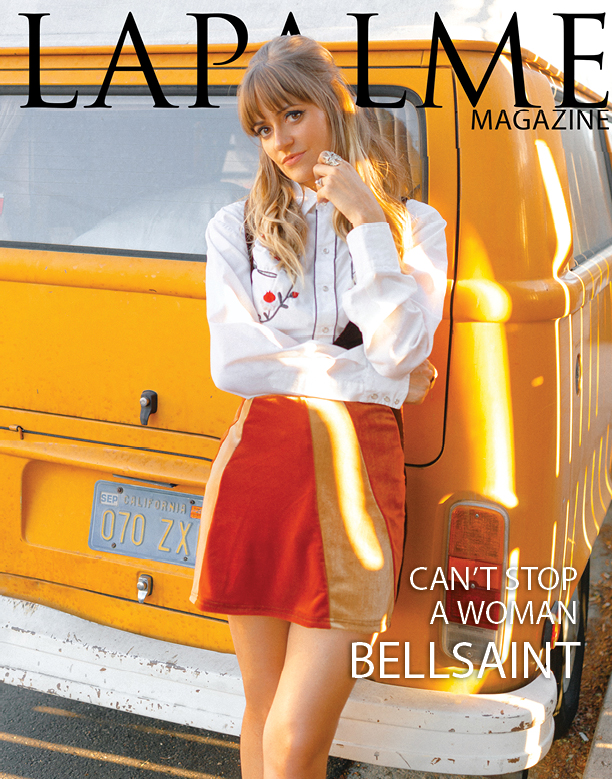 Caroline Brooks, aka BELLSAINT, comes from small-town Tyler, Texas with a sound reminiscent of Nancy Sinatra meets Adele. After spending years writing songs for other artists, Bellsaint decided to embark on her own career as a recording artist. In time, Bellsaint collaborated with renowned producers/songwriters and had songs placed in an Adidas ad, a Super Bowl commercial, Riverdale, Shameless, Rise, Pretty Little Liars and Famous In Love. The exposure garnered over 1.1 million streams on Bellsaint’s Spotify and the fanbase is growing each day.

“I still point at the screen and shriek, “That’s my song!” Recently getting all the exposure from the show Riverdale is still a trip.”

LM: Growing up, did you ever think that this would be the life that you would have? Has music always been a big part of your life? Can you remember your first musical experience?

I always hoped I would get to write and perform music for a living, but I don’t think it sunk in as a reality until things started lining up the past few years. Music has always been a big part of my life. I started writing songs when I was seven on a battery-operated CASIO, and have been performing since I could walk. The first ever musical experience I remember is playing a skunk in a kindergarten musical. I was mortified, and I think I forgot most of the words.

LM: What was it like shooting the music video for “Karma?”

Shooting the music video for “Karma” was a blast. I was so excited to collaborate with such an elegant brand like Club Monaco. Not to mention, working with directors Mariana McCune and Mark McCune was inspiring. We wanted the overall message and vibe to be simplistic in conveying the idea of karma.

LM: You have written for so many artists, what collaboration has stood out to you the most?
I had the privilege of collaborating with Natalie Imbruglia in London a while back, and it was such an inspiring experience.

The first of 3 singles, “Like Gold To Me” is an awesome vintage pop song. With a 50s-Vibe to it, the thoughtful lyrics and harmonic depth will make you think of an old high school crush. It’s easy to become a sucker for this type of music. It’s easy to be a Bellsaint fan.

“I wanted it to elicit the rare joy that comes from finding an undeniable connection in a friend you have mad love and respect for.”

Bellsaint’s new single “Can’t Stop A Woman” was released today! Stay up to date with all new music on Spotify https://open.spotify.com/artist/1ASbcqMhp2Xsx8xQ2NQK0p