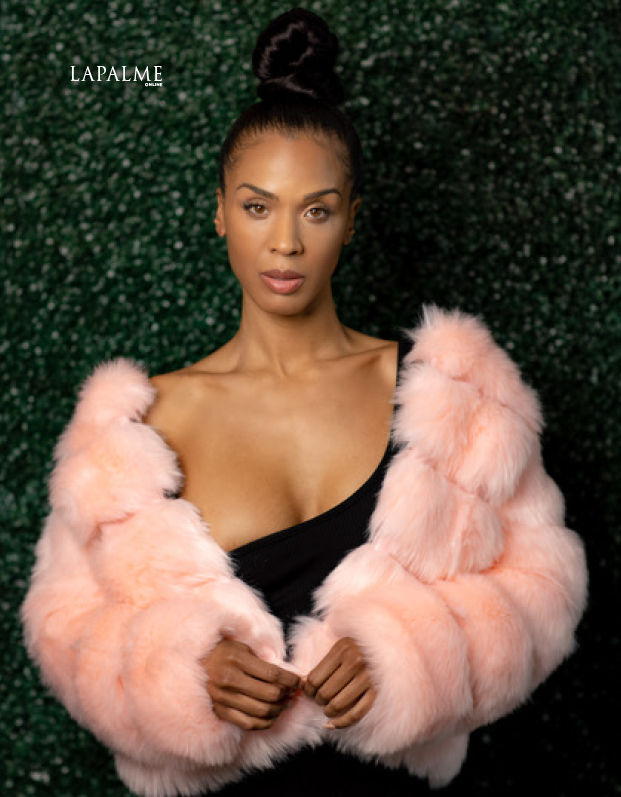 Laila Odom grew up with a passion for acting, singing, and dancing. As a triple threat, it was only right for her to play Sandra “Pepa” Denton in Lifetime’s Salt-N-Pepa biopic, which premiered on January 23rd. Executive produced by Queen Latifah, the film tells the story of Sandra and Cheryl (“Salt”) James, who met as nursing students and became the First Ladies of rap and hip hop after recording a song for their friend Hurby Azor. As we praise artists like Megan Thee Stallion, Nicki Minaj, and Doja Cat, it is equally important to remember the trailblazers who paved the way and helped define a generation.

Upon the film’s release, Laila Odom spoke to LaPalme Magazine about how she prepared for the role, her favorite designers, and losing her voice on set.

LM: How did the role of Sandra “Pepa” Denton come to you?

LO: This happened in the summer of 2019. I just auditioned as an actress. It was a long process I probably went in about 4 times for callbacks. We started dance boot camp in L.A. Then we went to Toronto to shoot it and we were there until the end of 2019, so we just missed COVID.

LM: How did you prepare for the role?

LO: I watched everything Salt N Pepa – videos, performances, interviews! Everything and anything I could find about Salt N Pepa. In a day, we would do time in the studio learning the songs, the cadence, and the rhythm. Then after that, we would head to the dance studio and dance for the rest of the day into the evening. It was very intense to be dancing for five to six hours, but it prepared us so that when we got to Toronto, we were completely ready. I took a lot of Epsom salt baths at that time. Everything hurt at the end of the night. But when you do something that you love, you can get up and do it again.

LM: Do you have any type of creative process when getting into a role?

LO: I did different types of research to prepare myself to play Sandra “Pepa” Denton. In the first stages of the audition process, I watched all of the Salt-N-Pepa performances, interviews, and music videos. I read Pepa’s book “It’s all about Pep” and watched hip-hop movies from the ’80s and ’90s to get the style and lingo. I asked my older cousins who came up during that time, to share their experiences. Lastly, my best research was being able to spend time with Sandy “Pepa”! What better source than the woman herself!

LM: Although you portray Pepa, who do you relate to more, Salt or Pepa?

LO: Pepa! She’s funny, outgoing, and unabashed, just like myself.

LM: Did you face any obstacles or challenges while preparing or filming the role of Pepa?

LO: The biggest challenge I faced while shooting the Salt N Pepa biopic was losing my voice for 4 days. It was perfect at first because there was a scene when Pepa was sick and my voice being horse was perfect. From the experience, I’m a pro at learning how to get my voice back!

LM: What are your current self-care routines?

LO: I love to workout! I train with DB at DonaMatrix, I love RISE NATION and G:50 for PILATES. I love to travel for yoga retreats, the last one I attended was in Bali, Indonesia. It was so beautiful! I started adding Collagen Peptides by Sports Research in my daily shakes which promotes healthy skin and hair too!

LM: Who are your favorite designers currently?

LO: I love sneakers. Jordan 1’s are my absolute favorite! There are so many designers I love, depending on the occasion. I love FRAME denim, sweatsuits by CHASER, ALO for yoga, and MICHAEL COSTELLO to name a few.

LM: What hobbies have you picked up during the pandemic downtime?

LO: During the pandemic, cooking became a new hobby. I enjoyed trying new dishes. With my gym being closed, I purchased an indoor water rowing machine and taught myself how to row. From Youtube videos, of course!

LM: How do you think music has influenced our society?

LO: Music influences so much of your daily life, especially now that musicians have their own beauty/make-up lines and clothing companies. Hip-hop music alone can influence the clothing you wear and/or the type of car you drive.