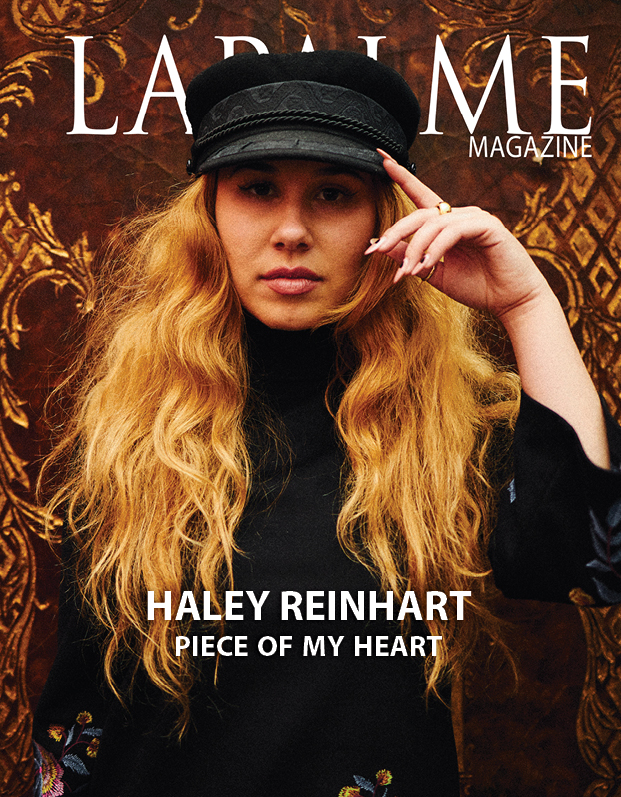 American singer/songwriter Haley Reinhart garnered our attention after rising to fame after placing third in the tenth season of American Idol. Haley’s debut album Listen Up! was released on May 22, 2012, catapulting Haley to become the first American Idol alumna to perform at Lollapalooza. Haley released her second studio album, Better, in 2016, which debuted at number 22 on Billboard’s Independent Albums chart. Between albums, Haley Reinhart grew into a household name when her cover to Elvis Presley’s “Can’t Help Falling in Love” was used in a commercial for Extra Gum. Her cover then became viral, peaked at number 16 on the US Adult Contemporary Chart, and was certified Platinum by the Recording Industry Association of America.

In 2015, Haley made her voice acting debut as Bill Murphy on Netflix’s animated comedy F is For Family. She reprised the role as the main cast member in the series’ second and third seasons. Reinhart also makes her live acting debut in Robert Rodriguez’s science fiction superhero film, We Can Be Heroes, set to be released via Netflix.

LaPalme Magazine scored a chance to sit down with Haley for an interview. Here are the details.

How did you get your start in music?

Mom was teaching me how to sing my “Do-Re-Mi’s” before I could talk, while Dad was playing the call and response game and had me scatting as a baby. It wasn’t long until I started joining my parents and their band on the big stage. I started off singing LeAnn Rimes, “Blue,” which always brought the house down. It was straight out of a movie. Just imagine this tiny kid nervously crawling up onstage and starts yodeling for a packed bar full of all kinds of characters. I learned at an early age how to get past my fears. I loved it then, and I love it still! I formed some bands growing up and sang a lot in school and eventually placed third on American Idol season 10, which was the beginning of my professional career here in La La Land A.K.A Los Angeles!

Who inspired your sound and vocal style?

My mom always inspired me to find the power in my voice. Originality means a great deal to me, but I’ve garnered a lot of style and techniques listening to my heroes like John Lennon and Paul McCartney. Janis Joplin and Dusty Springfield to Ella Fitzgerald and Billie Holiday. I also grew up listening to Aaliyah, Corinne Bailey Rae, Christina Aguilera, and Fiona Apple, to name a few. I was pulling influence from all kinds of genres. The list is very long!

Is there a creative process or routine you have while writing and recording music?

I like to begin with a melody that comes out naturally. After that, the lyrics seem to spill out once the cords and vibe have been established. I like to jot down a lot of lyrical phrases when they come to me as well as hundreds of voice memos with melody ideas. For my latest album, “Lo-Fi Soul,” I went back to voice memos and specific demos I wrote years ago and developed them into some of my favorite songs I’ve ever written.

What do you find to be the more challenging aspects of a tour and performing live?

I have to find a solid balance of singing, using my voice to chat it up in meet and greets with fans and friends, and going out and having a good time. The road gives me a lot of life, and I’m usually surprised by the stamina that grows with me and the band show after show. I try to take care of myself the best I can, drink my tea and honey, Emergen-C, eat a lot of chicken wings, be present in the moment on and off stage, and give it all I have every show!

How do you make a cover song your own?

I gravitate to songs that hit me hard in the feels. If I relate to a song emotionally and feel passionate about it, there’s no doubt I will sing my heart out and add my own unique flavors to it. I want you to feel the heartbreak, the sorrow, the lust, or the love behind the story I’m telling and let it take you for a ride. I like to blend genres, so it’s always a little bit of soul, jazz, and rock ‘n’ roll.

How are you staying busy while staying at home?

I’m thankful that I can still do awesome interviews like this and continue to promote my latest single, “Piece of My Heart.” Aside from that, I have other projects in the works. My hobbies include taking walks around the neighborhood, literally smelling the roses, learning guitar, laying in the sun, playing vinyl, and dancing around my casa lighting Palo Santo to purify and cleanse energy my space!

How are you maintaining your creativity while being home?

This has been a great time to check in with friends and family and also go within to do some more soul searching. I’m feeling inspired and reacquainting myself with my short and long term goals as an artist. We are living through some seriously wild times, and I feel as though I’m here to continue to put out empowering messages to the universe and all of you listening out there!

How can we stay connected with you?

Check out my new single, “Piece of My Heart,” as well as my latest album, “Lo-Fi Soul.” Subscribe to my YouTube channel and follow me on Spotify/all of the social platforms (Insta, FB, Twitter) (@haleyreinhart) You can check out my website and buy tickets for my upcoming tours (all tickets purchased will be honored for the future postponed dates) at haleyreinhart.com/tour

What can we expect to come from Haley this year?

A lot of cool projects are coming out soon! Stay tuned for a new EP that I’ve been working on. Check out the Netflix original animated series, F Is For Family, Season 4 is coming soon! I play a little red-headed boy named Bill Murphy for those of you who don’t know. A few songs I performed directly to tape/wax vinyl and shot on film in Vienna last year will be featured in a new documentary called An Impossible Project. I’m excited to announce that I’ll be making my film debut in the new Robert Rodriguez movie, We Can Be Heroes. Hope to see you all at a show, when life is more normal again, much love!