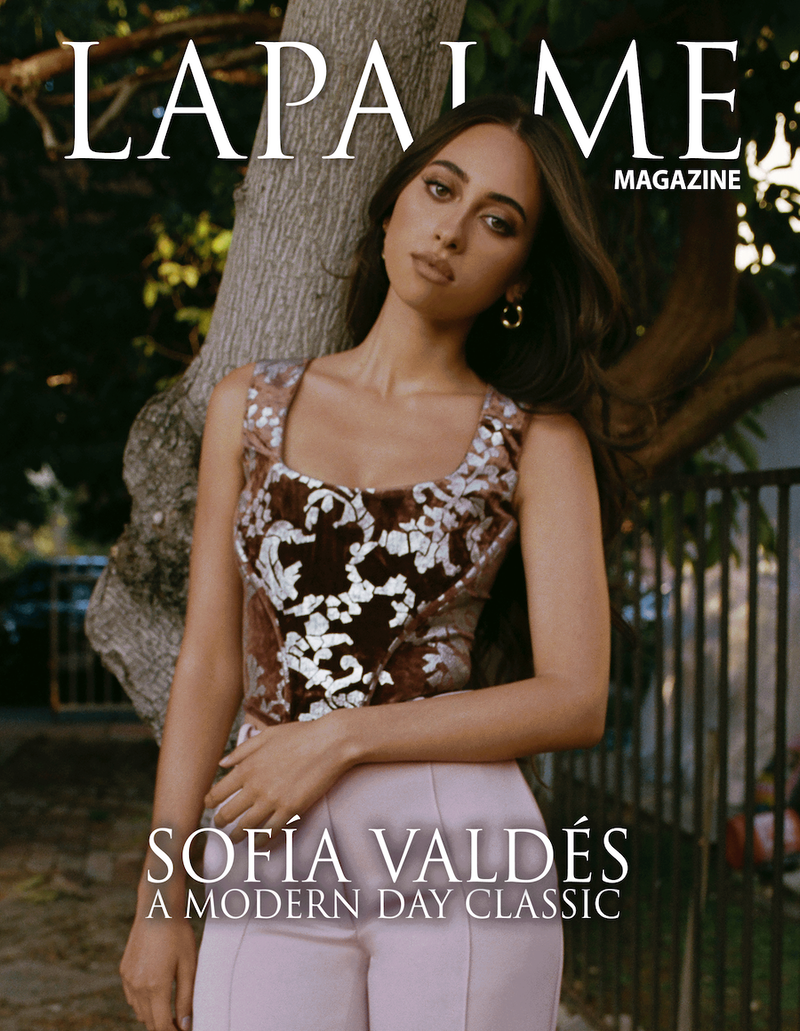 A 20-year-old singer/songwriter born and bred in Panama, Sofía Valdés creates the kind of emotionally honest and beautifully original pop music that could only come from years of exploration. After learning to play guitar at the age of eight and writing her first song at 13, the independent-minded artist sharpened her craft by studying at fine-arts schools in the U.S. and U.K., and by building an eclectic sonic vocabulary informed by everything from British folk and bossa nova to ’60s Motown and ’70s soul. On her debut EP Ventura, Valdés alchemizes those inspirations into a sound all her own, gracing each track with her indelible songwriting and beguiling voice.

With its transcendent melodies and shape-shifting rhythms, Ventura is an elegant introduction the vibrant musicality that may very well be in Valdés’s blood: her great-grandfather was the legendary Cuban musician Miguelito Valdés, and her great-grandmother was Silvia De Grasse (a famed Panamanian singer who once performed with Louis Armstrong). As a child, Valdés discovered her musical talents after a therapist suggested she take up guitar to help with her coordination and concentration. (A notoriously poor student in her early years, she struggled in the classroom, changing schools countless times before the age of 15.) Since her mom mostly listened to top 40 radio—and her guitar teacher favored classic-rock bands like the Rolling Stones—Valdés took charge of her musical education and quickly found her way to formative influences like Nick Drake, João Gilberto, Stevie Nicks, Bobbie Womack, Bob Dylan, and Minnie Riperton. Within a few years, she’d written her first song (“It was about a ghost in my house; his name was Kevin”), and soon began infusing her material with the dreamy melancholy that defines her music today.

Before long, Valdés was staying up all night working on songs and sleeping through school the next day—a cycle that continued until she decided to apply to Interlochen Arts Academy, a boarding school in Northern Michigan. Because her family was dealing with significant troubles at the time, Valdés sent in her application without her mother’s knowledge or consent. “I realized I couldn’t rely on anyone to make things happen for me,” says Valdés. “I needed to find a way to get out on my own.”

After gaining acceptance and securing financial aid—despite failing part of the entrance exam due to the language barrier—Valdés headed to Interlochen and immediately thrived in the school’s hyper-creative atmosphere. “We’d sit for hours and hours, just crafting songs,” she recalls. “We could spend two weeks on one song, going lyric by lyric, figuring out how to make it work.” Though she spoke some English upon landing in Michigan, Valdés soon mastered the language and expanded her lyrical palette, further honing her delicate yet distinct narrative voice.

To move forward with her musical development, Valdés next headed to the Liverpool Institute for Performing Arts, a world-renowned university founded by Paul McCartney. Having journeyed more than 5,000 miles from home, she suffered even greater culture shock than in her early days in Michigan, and spent most of her first year in England feeling miserably out of place. “I didn’t have connections and I couldn’t even speak to people because I was so shy,” Valdés says. “That whole year I was just alone in my room, writing songs that no one else ever heard.” Although she tried working with others, each potential collaborator failed to grasp her vision for her music. “By the end of freshman year I was ready to drop out and go be a yoga teacher,” she says. “It was hell and I was so unhappy—but then it ended up all being worth it.”

Upon returning to Liverpool the following year, Valdés connected with fellow musicians who encouraged her to keep writing and hooked her up with co-writing sessions in London. She also started posting her songs online, eventually catching the attention of a music manager who reached out to her toward the end of the semester. Within weeks, her Christmas trip home to Panama was derailed by a visit to Los Angeles to meet with record labels, which promptly led to her signing with Warner Records. Though she returned to Liverpool for the spring semester, Valdés soon had to fly back to Panama when the pandemic hit, taking off in such a rush that her guitars and computer were left behind. Once she’d gotten settled at home, Valdés began the process of working remotely with producers to bring her debut EP to life.

A selection of songs Valdés has gathered since her days in Michigan, Ventura bears a lushly textured sound that perfectly echoes the effusive emotion of her songwriting—a quality she attributes partly to the ultra-romantic piano compositions she obsessed over as a child. “When I was younger someone gave me this huge collection of records from the Impressionist Era of classical music, and that was all I listened to for years,” she says. “I loved it because it was so melancholic and dramatic.” Co-produced by Valdés along with producer/engineers like Oscar Scheller (Charli XCX, Connie Constance), the EP’s sonic aesthetic fully preserves the intimacy of her songwriting process, which always starts in purposeful solitude. “It opens my head up to write in weird places, so sometimes I’ll take my guitar into my mom’s bathtub, or go sit under a table,” she notes.

With most of its songs sparked from romantic disappointment, Ventura unfolds with a heartfelt expression that feels extraordinarily subtle yet lingers long after its last track. Throughout the EP, Valdés adorns her sensitive introspection with graceful guitar work and so many idiosyncratic details: the strangely hypnotic repetition of the title word on “Lonely,” the woozy grooves of “Handful of Water” (a song whose lyrics sometimes drift into Spanish—an unintentional deviation Valdés ultimately chose to keep in the final version, in recognition of her heritage). One of the most mesmerizing moments on Ventura, “Amsterdam” centers on a quietly devastating vocal performance from Valdés, who sounds sublimely lost in the haze of heartbroken memory. In a brilliant counterpart to her languid delivery, Valdés layers the song with a scratchy sample of a poem  by Jorge Luis Borges read in Spanish, as well as a bit of kinetic hand percussion inspired by the music she often heard while growing up in Panama. The result is a truly stunning track, a prime example of Valdés’s potent musical imagination.

In reflecting on Ventura, Valdés points to an unexpected outcome of making the EP: a much more powerful connection to her cultural background. “The deeper I get into working on my music, the more I realize how much it’s connected to the music that people in my family were making a long time ago,” she says. “On the EP it’s in little things like the movement of the drums, but I want to explore that even more from now on.” Not only a major creative breakthrough, that shift in approach speaks to a greater sense of self-acceptance. “When I first went to the U.S., I realized that people saw me as different, and I started doing things like dyeing my hair blonde to try to fit in,” she says. “I was scared about people finding out where I was from, but then one day I just stopped and said, ‘This makes no sense.’ Now I want everyone to know that my culture is amazing and that I’m so proud of it, and that everyone else should be proud of their culture too.”

What do you want fans to take away from your new EP, Ventura? What’s the big take-away? I would like for people to have fun or feel sad while listening to it and feel connected with my stories in some way or another.

You wrote your first song at 13? That’s amazing. Do you remember what it was about? Yes… I wrote it about a ghost that I thought lived in my house named Kevin.

I read online that each song off your EP “acts as little windows into your soul.” How do you, as an artist, open up and become vulnerable enough to pour your emotions into a song? I feel like its really easy for me to be vulnerable. When I write I try to think no one is going to listen to it so that I don’t feel scared of what I might say about myself. Usually, I’m happy with what I’ve done. I find power in vulnerability.

I love your song Handful of Water. Tell me about this song and what this means to you? It was one of the first songs I wrote in a session. I had done other sessions, but I hadn’t loved the songs. At the time I was working super hard for this music thing to work out I was taking really long trains to London at 5 am to get home at 12 am in Liverpool and do schoolwork at the same time. When I wrote H.O.W. I felt like everything paid off.

Art extends much further than just the music for you. You also filmed some of your music videos yourself while traveling in Hawaii. Tell me about this and how you were able to film your own videos. The Hawaii video was more of a vlog that I did of clips I had taken but we weren’t planning for it to be a music video.  my first attempt at a music video was with the little did I know music video. Both the videos where recorded on a hectic lil camera. When I was younger, I was very into film making. I would make my friends dress up and make them be on my movies. Because of this I could kind of edit hahaha

You told W Magazine “I’m more of a songwriter, I just happen to sing my own songs.” Can you elaborate what you mean by this? I don’t really see myself as a singer. I’m more comfortable with the writing aspect of all of this. Writing for myself or other people was what I wanted for a while but now I’m singing my own songs and being the “face” of a project. Though I know that this was always my dream I never felt like I was meant to be the front singer.

Okay, Sofia. Tell me. What’s next for you? I’m currently working on my second EP.