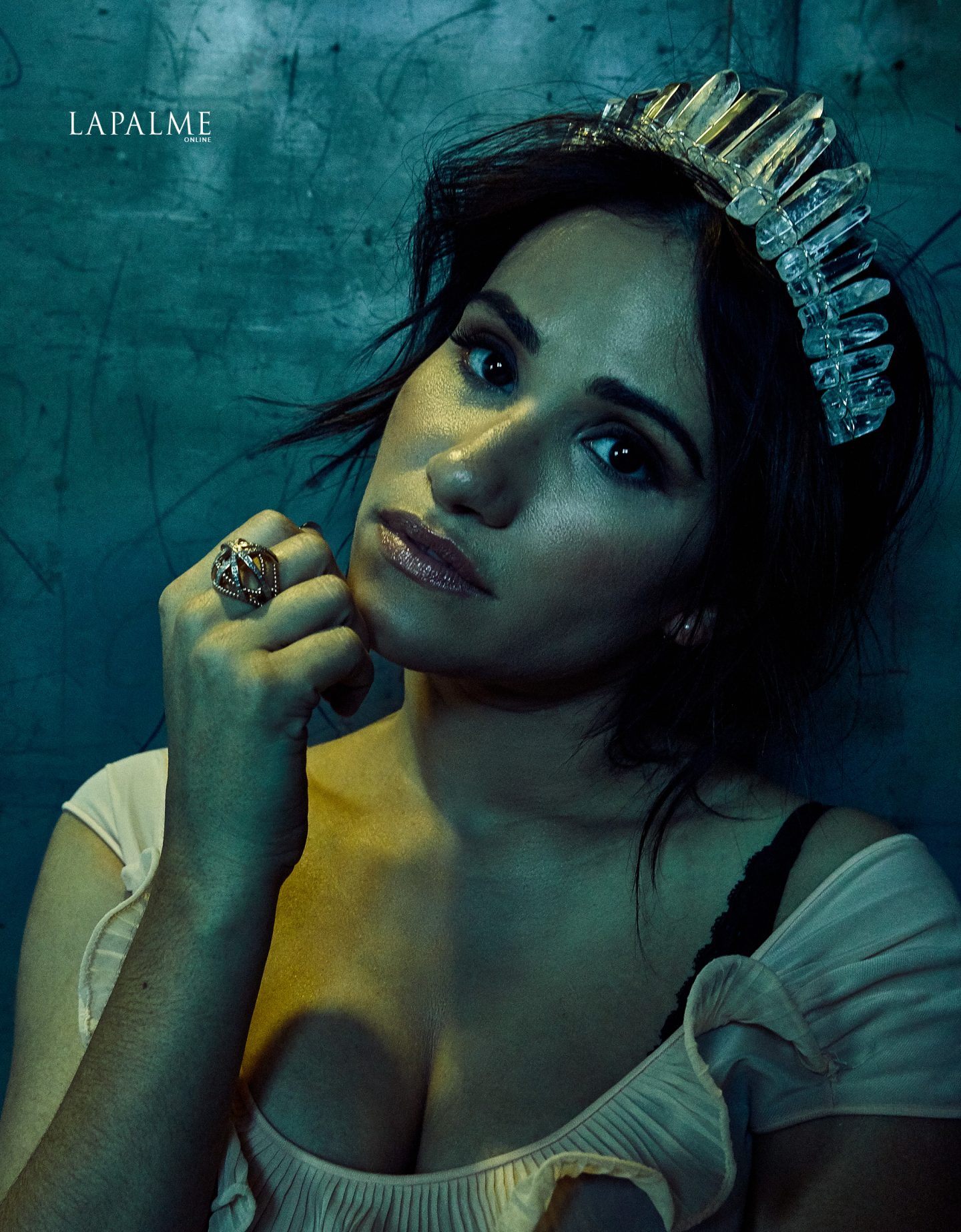 “Harry & Meghan: Becoming Royal,” the sequel to the 2018 Lifetime movie “Harry & Meghan: A Royal Romance” is set for release May 27th. This time around new stars have taken over the roles of the lovebirds with Charlie Fields playing Prince Harry and Tiffany Smith with the honor of playing the role of Meghan Markle. Lapalme Magazine got a chance to speak with Tiffany about preparing for the role, how she got into acting and what we can expect from her.

What made you want to get into acting?

I was born in Los Angeles. So I think that acting/entertainment is kind of in my blood. My sister actually auditioned for commercials when she was little, but when I was old enough to start auditioning we were no longer living in California. So, I didn’t get seriously into acting until after college.

For me, acting is a passion because I love how a film or TV show can make you feel. I love how much joy a movie can bring a person, and that feeling of not being able to wipe the smile off your face. I love bringing stories to life that make people feel things feel joy feel and uplifted.

Was there ever a plan B?

I don’t think I’ve ever really been backup plan kind of person; I’ve always set goals for myself. I love journaling, writing lists of things I want accomplish, and creating vision boards.

For a long I wanted to be a and was part of a pop group for a bit. Then I went to college for Broadcast Journalism. I grew up reading comic and loved talking about video games, so I set another goal for myself to work for G4 as a host of “Attack Of The Show.” I accomplished that, and through hosting I got to do more and more projects. That was kind of when I started to realize that the next thing I really wanted to focus on was acting. I put a lot of my energy into that, whether it’s taking more classes or auditioning more. For me, every project kind of leads to the next one and the next one and the next one. So, it never really feels like I need to or have ever come up with a backup plan.

Tell us about your new role in Lifetime’s “Harry & Meghan: Becoming Royal.” What can viewers expect to see when the film debuts this month?

“Harry & Meghan: Becoming Royal” picks up right about where the last Lifetime film ended. They are engaged and she is headed to London to have the wedding that we all watched – and really just find her place in this new royal family. What I loved about this script is that we get to see so many aspects of Meghan and Harry’s relationship. Obviously, there’s stuff that has come out publicly but we haven’t gotten to see stuff that’s behind closed doors. For me and Charlie, who plays Harry, it was really fun to get to develop and create this life that they have just as a realistic relationship.

We get to see new aspects of the relationship. We get to see Meghan interacting more with the Queen. And, I love that there are some really great moments between Laura, who plays Kate, and myself. I think people are gonna be really excited to see that too.

How did you prepare for the role of Meghan Markle?

I did a lot to prepare for this role. I definitely watched a lot more “Suits.” I watched a lot of YouTube and Instagram videos. It was really important for me to see small, somewhat candid moments, and as many as I could find. Whether it was behind the scenes stuff for interviews with Meghan while she was on “Suits” or when she would make a public appearance. I wanted to incorporate all of those things into my portrayal of her. It was also really important for me to look up real etiquette because I wanted to make sure that I did those the proper way.

The first film was really them falling in love, so the royal protocol wasn’t necessarily there in the same way as it was for me playing Meghan in this movie. I read a lot of articles and watched as many videos as I possibly could before getting to set. Then I really just trusted the Director and our writer that they had put what was most important into the script and would be on set to guide us along the way if we missed anything

What was your reaction when you learned you scored the role of Meghan Markle?

I was so excited when I heard that I booked the role! I definitely called my parents and my sister and sent texts to a few friends who I’d been talking with throughout the audition process. And, I had a little dance party by myself at home. Then I immediately started working, digging into the full script and doing my research. I love the research aspect of being an actor, and putting as many pieces as you can together about the character!

Did you learn anything about yourself while playing the role of Meghan?

I learned a lot from the role, it was such an awesome opportunity. And, it was great because I could really dive into my multi-ethnic background and pull on my own experiences. Seeing it again through Harry and Meghan’s relationship inspired so much personal growth for me. It was such a privilege to portray Meghan who’s doing so many great things for the world and sacrificing a big part of her privacy to do it – all for love. I felt so inspired and though Meghan’s doing it on such a bigger scale, I just love feeling like I’m helping, even if it’s something small in my local community. I learned that no matter what situation you’re in you are going to have struggles, but there are still ways of doing things to help and support others no matter the scale.

Any challenges while playing her role?

It’s an interesting job playing a real person – and a real life person who is so in the public eye currently. I really wanted to make sure that I incorporated the things that really speak to me about Meghan. To make sure that women’s empowerment was something that was strong in her character, to show that you can be a strong woman but still go through some emotional experiences. As an added bonus, while thinking about those aspects of this incredible woman, I learned and I grew so much from playing this role. I just really hope that when people watch they feel joyful, uplifted and can see how special this movie was for all of us to make.

After being featured on hit television shows like Supernatural, Jane the Virgin, and so much more, do you have a favorite role? Why?

At this point for me it seems as though whatever project I just finished is my favorite. “Jane The Virgin” it was such an incredible experience and I absolutely love getting to be on that set.

Then going on to “Supernatural,” getting to do some magic and stunts – and just experiencing what a set is like that’s been around for so long and how much joy there is on it. With “Supernatural” being in its last season now, I would absolutely love to get to go back and bring my character ‘Ophelia’ on for another episode *fingers crossed.*

Now, obviously having played Meghan in this movie, it was just such an incredible experience from start to finish.  I learned so much and really pushed myself to do the best job that I could. I’m really really happy with what we did in Vancouver, the movie that we made, the friends that I made on set, and overall really just excited and eager for everyone to see it!

There are so many roles I’d love to play. Overall though, I would just love to be able to continue to work, grow, learn, and do roles that bring people joy – myself included! I am a big fan of the “Fast and Furious” world and would love to get to be a part of a project like that, or “Umbrella Academy,” “Doom Patrol,” or “The Magicians.” I just love that genre of TV and film. I am a huge comic book fan, so shows like that are so exciting to me. That said, being a huge comic book fan, there is one character in the DC Universe that I would love to play and her name is Zatanna! So, fingers crossed for that one day in the future!

What projects can we expect from you in the future?

I’m working hard, auditioning and I’m just focusing on the film to be released. I’m so excited for everyone to see it!

It’s just exciting being an actress – you never know what character is waiting around the corner for you. I actually have some comedy in my future, and I’ve just been booked as a guest star on a show that I’m a big fan of. So I can share more specifics about those projects soon! But, if you follow me on social media I always try to keep everyone pretty up to date with what’s going on with me there: @Tiffany_Smith