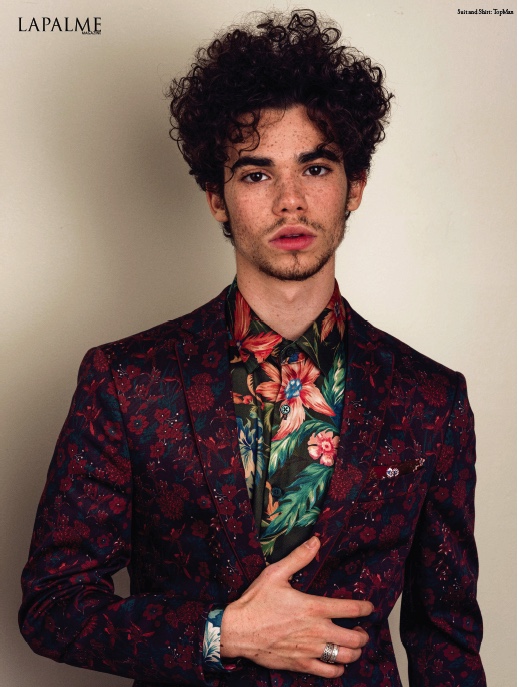 The world knows him as a Disney boy wonder, but triple threat Cameron Boyce is so much more. From his new accessory collection to his work with clean water, Cameron is taking his reach to a whole new level.

LAPALME – From starting on General Hospital to Adam Sandler
films and now starring in the Descendants franchise,
do you think that you have a dream career as an actor?
Acting is my dream career. In terms of my credits, I don’t
look at them and think I’ve proven myself. I’m never
satisfied… it’s a common trait among actors. I’m incredibly
grateful for everything that has happened for me, especially
being 18, but it just pushes me to do even more.

LAPALME – We know you are a breakdancer, how did that all come
about and where do you see it going in your career
now?
Breaking was the last dance style that I studied, and one
of the most fun. I used to go to jams and dance with my
best friends which were some of the best memories I have.
We don’t get to break as much anymore because of all of
the work that we’re doing. Everyone in the crew has their
own thing going now which is terrific.

LAPALME – What are three things that even your most devoted fans
don’t know about you?
The volume in my car is always on full blast. I eat Oreos
with a fork because you can dunk the whole cookie. I put
my dad in choke holds, and he never sees em’ coming.

LAPALME – You are being honored with the Pioneering Spirit
Award for your work with clean water, what drew you
to the cause?
We have to start somewhere. It always shocks me how
much we neglect basic human essentials. That’s why I’ve
worked a lot in reversing the water crisis and the homeless
epidemic. It’s so important to be a part of something bigger
than you. To use your voice, however big or small it is.

LAPALME – Tell us about your new accessory line. What inspired
you to start it?
My love of creating, fashion, and giving back in one project.
The whole idea of the line is to produce something
that can be loved by anyone. Unisex bracelets are sold
with a portion of the proceeds going to causes that I’m
passionate about. It’s so rewarding to do things my way,
from designing the bracelets to picking the charities.

LAPALME – Who’s in Hollywood do you look up to and
why? Hollywood crushes?
This year Timothee Chalamet exploded on the scene
which was so incredible to watch. He has talent that
you don’t see in many other places. As for crushes, Lupita
is now leading the race thanks to Black Panther.