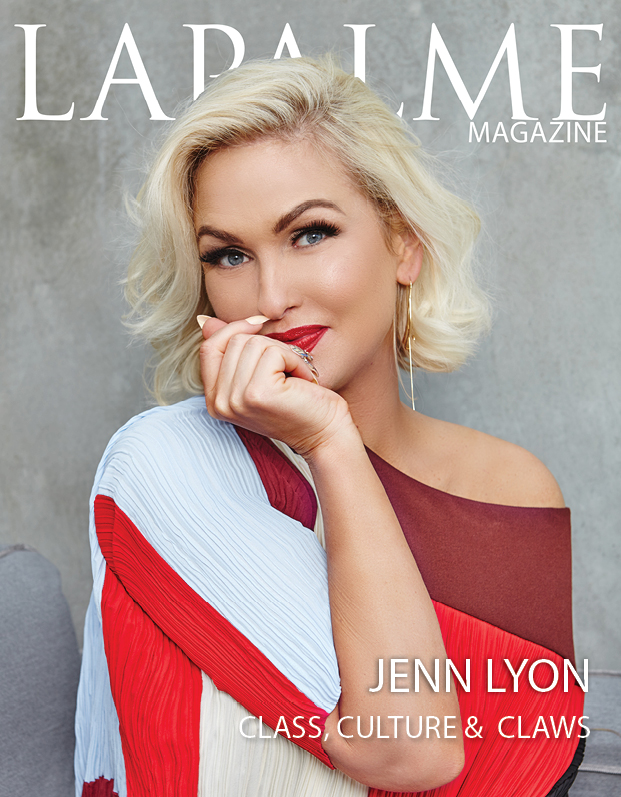 With a resume full of roles both on screen and in theatre, Jenn Lyon had to learn how to make big stage moments intimate for the screen. Her first reoccurring role came in 2012 when she began playing Lindsey Salazar, a thieving bartender on “Justified.” Then came her first series regular role on “Saint George,” which led her to the TNT drama series “Claws.” Jenn plays a spirited, loyal manicurist Jennifer Husser. LaPalme Magazine got the chance to interview with Jenn Lyon, and we were not disappointed!

Considering your theater background, what advice would you give actors making the jump from the stage to screen?

Take your volume down, sassy. Play the room you’re in- don’t go into an audition room and play to the balcony; the camera is real close to your face.

How do you bring that intimacy to “Claws,” a show that’s larger than life in some ways?

I think humanity and people and situations are “larger than life” in a lot of ways. Just when I say to myself, “no one would act that way,” I get on the subway and see a lady with a pet opossum as a hat, openly clipping her toenails, and that lady is a real person with a story. “Claws” is wild, but so is Florida.

How does the role add to your acting skills?

This role lets me run the gamut of emotions and objectives on a deadline. You get a couple of takes of your own coverage to get it right, and that’s forever. These other actors give me a masterclass in their work and commitment.

How did you prepare for the audition for this type of character?

I read it over and over, broke down the script, put in some hoop earrings, teased my hair and crossed my fingers.

What kind of research did you do to prep for this role or did you know right off the bat who Jen was?

I grew up in the south and was surrounded by funny, tough women who were also vulnerable and complicated, so I knew that kind of woman well. I did some research on Florida, and the breakdown for the role had some snippets of her rough childhood and relationship to men and from all that I felt I had a pretty good outline. The role is in the writing though- Eliot Laurence created this lady, and every answer I needed was in the words on the page.

Did your work on “Justified” help prepare you for a series regular role?

It really did. I had never been on a set where the writing changed so quickly, and you had to memorize new lines while timing your physical business with camera moves and hitting different marks. I was so scared, but it helped me be brave. Also, Tim Olyphant was so kind and patient but don’t tell him I said that.

What other skills have you acquired along the way?

I think I have cultivated a gratitude for all the different departments it takes to make a thing happen. Actors are just getting in the way of the furniture- there are hundreds of people who are there before us in the morning and after us at night and no one is asking them to do interviews. They are the heroes.

What’s your favorite thing about the show “Claws?”

That’s too hard. I love so many things! The clothes, the music, the way it straddles so many different worlds. But I guess it all boils down to the people. I love laughing every day with this community of crazy ass artists as we strive to make something bigger than ourselves.

Jennifer goes through a lot each season. Has your perception of her changed from season to season?

Definitely. I never know what’s going to happen- we get the next script like a week in advance, so I get surprised all the time. I think the core of Jennifer remains and her adoration for her friends and her resilience, but she gets to mature and regress just like a real person, and I love that.

“Claws” is a show centered on a group of strong women, and one of the most significant topics in the entertainment world right now is women standing up for themselves. Does the show feel more timely to you this season with what’s happening in reality?

It always feels on the pulse for me. Whether the show is dealing with equality or reproductive rights, it is a mirror to what’s happening in reality. It includes the struggle of all marginalized groups. Our writers are dope like that.

What have you gained from working on this show or from playing this character that you didn’t have before? How has “Claws” changed Jenn Lyon?

I’ve definitely gained weight. Living in New Orleans for six months out of the year will do that to you. But seriously, “Claws” has changed my life and given me more security than I’ve ever had. I can make enough money to live and not also have a day job. Slinging pizza is honorable work, but this is slightly more glamorous.

What does it mean to you as an actress in an industry that’s known for putting pressure on women to be a certain size?

I have openly discussed my struggle with eating disorders, and there is a quote that helps me when I start to backslide because of the ridiculous expectations we are fed. Naomi Wolf said  “A culture fixated on female thinness is not an obsession with female beauty. It is an obsession about female obedience.”