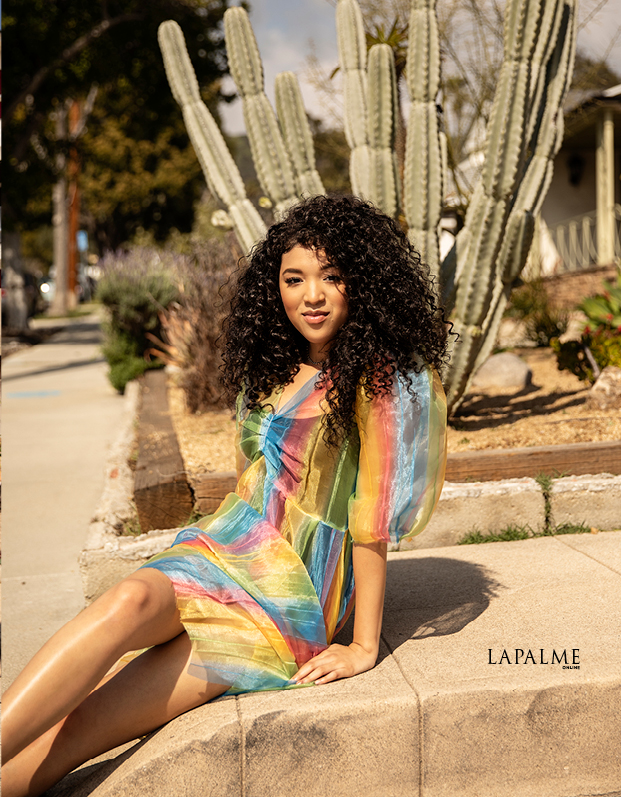 Actress, Gabrielle Elyse, has quickly become “one to watch” as she charms our hearts with her natural talent, beauty and pure passion for her craft. Gabrielle has appeared in several television shows and films including MTV’s “Teen Wolf,” ABC’s “Modern Family,” the silent short film “The Money Tree” and most recently stars in the 2019 SXSW selected feature film, “Snatchers.” LaPalme Magazine was able to sit down for an interview with Gabrielle to discuss “Snatchers” and the importance of her role as Hayley Chamberlain.

LM: How would you describe your style?

GE: I would describe it as very eclectic. I don’t have a set sense of style. I alternate from a punk-rock look to bohemian to very urban. Sometimes a combination of all three.

LM: Who would you say influences your style?

GE: I would say Rihanna.

LM: What was the most challenging thing about working on Snatchers?

GE: That’s a great question. The acting part and my cast were a complete cake-walk. It was very much a harmonious project, but I think all of the technicalities of it all – the action sequences and working with animatronics is difficult because they can malfunction sometimes. I would say overall the action sequences took the most time out of anything in the project. It helped me develop patience because all of the little minute things matter, even though you don’t notice them in the moment. In the big picture the minute things matter.

LM: What was the most rewarding aspect of working on snatchers?

GE: Being able to be a part of a teenage coming of age story that revolved around two young women and not two young women competing with each other. There isn’t any form of malice or any stereotypical female tension. Personally, for me, I was happy that I got to play someone that was not defined as being “the ethnic best friend.” In the breakdown, it did call for someone of color, but in no way in the script was it stereotypical. At the end of the day, it was just two best friends coming together and fighting unworldly circumstances while trying to come into their own. Being a woman of color, it’s very refreshing not to be defined by that.

LM: What did you learn about yourself as an actress and a performer while working with the cast on the set?

GE: It might be really specific, but I found that I’m funnier than I thought I am, and I give myself credit for. I’m not going to claim the title, but it felt good to know that my hard work and my training amounted to something beautiful and almost effortless and it all flowed through me very well.

LM: How did you get into Hayley’s character? Do you have a process at all?

GE: I do actually. Of course, it starts with breaking down the script and knowing how other characters describe and interact with yours, how the character views herself and how she reacts in certain circumstances. The main differences between Hayley and I are that she’s way more comfortable with being outside the box and being a lone wolf than I am. I think I’m developing that now as a 22-year-old woman- when I started playing her, I was 18. She’s known who she is from a very young age I feel like because she’s very much on the outskirts of the typical high school experience. She’s way more blunt than I am. She gives you a loving push without any landing gear.

Each character I get to play, I make a playlist for them that includes all of the music I think they will listen to, or that represents a circumstance in their life. Hayley’s playlist consists of a lot of Panic! At the Disco, Taylor Swift, Ariana Grande, Stevie Wonder, and Kehlani.

LM: Aside from finding out you were much funnier than you thought you were, did you learn anything else about yourself while playing her character?

GE: I did. I have more of an outspoken personality than I thought I did. She gave me a chance to be more comfortable with who I am. She taught me the love of being a nerd. Because of her, I’m much more into comics and art and things like that.

LM: what initially appealed to you about the role of Hayley?

GE: I think what first made me fall in love with her was again, how blunt she is and how witty she is. The banter and the chemistry between the two girls are what pulled me in. As well as her intelligence.

LM: What would you say has been your favorite part of working on the project?

GE: There’s so many! It’s so hard to pick! The people, the men, and the crew who created it because they’re genuine people on set and outside of the set. They’re great friends. The entire thing was like Acting Olympics. The scary moments are scary, the real moments were real, and the funny moments were funny. There are three genres wrapped into one. It’s a horror, comedy, coming of age mixed with sci-fi, so it’s kind of like I got to play all four genres in one movie and one person.

LM: How did you know you wanted to be an actress?

GE: I was the stereotypical kid putting on plays for my family. I was always creating something. I was always singing and dancing.

LM: Did you ever have a plan B?

GE: There have been multiple plan B’s that I’ve thought about doing. I thought about being a journalist for a little while, or a party planner. All very contrast things. A solid plan B that I do want to pursue is becoming a director, writer, and producer. I think not only being in stuff that other people create, but I would like to see what stories I can create.

LM: Has there been any great advice that you’ve received while acting and what advice would you offer for upcoming and aspiring actors?

GE: I think the biggest piece of advice I would give someone in the entertainment industry is just perseverance. There’s a lot of reasons why you may not get a role. 9/10 times it’s nothing personal with you. It could be the most minute thing like you’re a half-inch taller than the lead character. Or they like this girl’s hair color over yours. Things you would never imagine to take you out of the running will take you out of it. It’s tough for people to understand that this business is so unconventional than any other career path. It’s not like you work hard and receive an immediate reward. You have to go under it or around it, and there’s no direct path to success in this industry. It doesn’t happen overnight. Some will do 8-10 years, and some will do 2-4 years. Everyone is very individualized, and the most underlying thing people need to keep in mind is to persevere. Find out what makes you unique and most authentic to yourself, that’s what people are going to be drawn to.