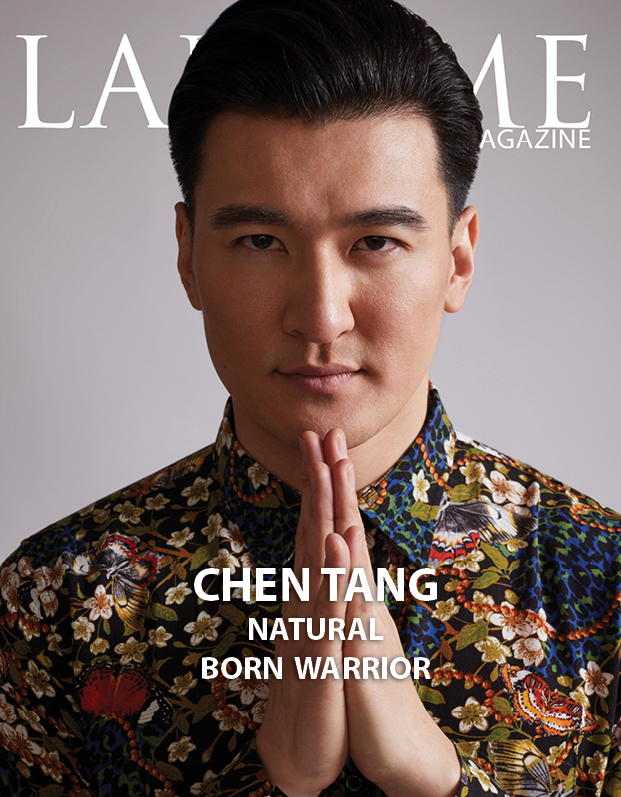 Disney+ has finally released the live-adaptation of the 1998-animated Mulan, a movie we’ve all long-awaited. Lapalme Magazine was lucky enough to sit down with Chen Tang, the man behind the sarcastic, but lovable soldier sidekick, Yao.

Born in Japan to Chinese parents, Chen and his family moved to Memphis when he was about five years old. With no pressure to follow in the footsteps of his parents, Chen eventually enrolled in an acting class for fun and he fell in love with the craft. After earning a degree in theater, Chen relocated to New York and eventually to Los Angeles.

Chen had a few brief recurring roles in Marvel’s Agents of S.H.I.E.L.D series on ABC and the Amazon Prime Video Bosch, but Mulan is his first big role. Although the new Mulan is not the same as the animated film, Chen reassures us that both films reimagine the story of a legendary Chinese female warrior, first recorded in the 6th-century, Ballad of Mulan.

What was your childhood like and when did you realize you wanted to become an actor?

I had a very international childhood. I was born in Japan, and moved to my home country of China and was raised there through my early childhood. We then immigrated to the Deep South (Memphis, Tennessee) when I was a boy. I think I ended up having so many languages, accents, and cultures hitting me all at once, and it gave me a life-long curiosity for different cultures and people. It was very cosmopolitan in some ways, but our family still embraced our traditional Chinese values. It always felt like I was stuck between cultures. I realized I wanted to be an actor when I was taking a fine arts class in college. I chose acting, since it seemed like they were having the most fun, and I thought it’d be an easy A. I was wrong. Acting is harder than it looks! But I ended up falling in love with it when they asked me to audition for the school’s shows. I ended up actually getting in, and doing a musical, and I thought to myself backstage before one of our shows, “People get paid for this? Having fun and playing make-believe?” It just felt right, and so I woke up one day in my dorm room and I decided I wanted to do this for a job. I left that school the semester after, and decided to go elsewhere to study acting. It’s not super dramatic of a story, but it was a sure feeling.

Do you find yourself binge-watching television shows like most people do?

You know, I don’t get a ton of time to watch TV as much as I would like. I have sort of an addictive personality, and once I start a series, I have to finish it. I think I watched the first four seasons of Game of Thrones over something like three days, just one episode after another! I do LOVE watching movies, though, and I’m currently trying to work through that book “1001 Movies You Must See Before You Die”.

What type of creative process do you have when trying to get into each of your characters?

It’s always different for every role, but I think the biggest thing I want to find is a way into the life of the character. I use a lot of imagination to go through a whole life of what this person goes through. I had a wonderful acting teacher once who told me, “Every statement, every part of a person’s life has a whole universe of meaning behind it”. So I try to go through as many details and specifics as possible to see what my imagination can “bump up against” so to speak. I believe that, and something as simple as a person’s name and what they’ve been called their whole life–if you really think about it–affects things in their lives. Imagine if you had a name people made fun of because it was really weird, or a name in, say, Chinese, that in our language means something poetic. I think it would give you something about the way this person sees the world, you know?

What is your favorite genre to act? And to watch?

I love character-driven dramas. I just love the process of transformation, and anything that gives me a chance to go play something vastly different than my regular self is great fun. I love watching big, epic movies. Stuff like Gladiator or Lord of the Rings. It’s just the magic of movie-making for me. I’m also a huge sci-fi nerd. Give me any good sci-fi film and I’m in.

How has social media influenced or affected your career as an actor?

Honestly, at this moment in my life, I’m not a huge fan of social media.  I think a lot of people genuinely love it and see the power of it, and I’m all for those people.  But I just don’t have a passion for it.   I’m definitely always trying to try to keep social media from taking up too much of my time since it’s pretty addictive.

Which of your roles are you most proud of?

I played a wonderful role in the upcoming second season of Warrior on Cinemax. It was my first series regular on a show. The show is all about the Chinatown gang wars in the 18th century San Francisco. My role was a guy named Hong, who is part of this gang who just landed from China. He’s super eccentric, quirky, and “not quite there” in the head. He’s a genuinely happy-go-lucky, lives-in-the-moment guy, who also happens to be a vicious, deadly killer who can fight with ruthless abandon. I was proud of the work I did for it, because they told me all the interesting choices and quirks I brought to the role was just so unique and personalized, and I remember even during the audition for it, I had wanted to do it my way. “Leave my scent on the role,” as Bryan Cranston says. The fact that I ended up getting it, and then creating the life of it through the shoot, and learning crazy amounts of fight choreography along the way to boot, gave me such a joyful creative experience.

What was it like filming for the new Mulan?

It was truly one of the great experiences of my life. Shooting for six months in New Zealand was like being on another, pristine planet.  Being on a set of that size cannot be described fully.  You were so immersed in it.  Like, if they needed us to walk into a castle, they actually just built the castle, with all the details inside it, and you walked in!  I had the time of my life, and I’ll remember it until the day I die.

Did you have to do any special training for the role as Yao?

We had some serious physical training, and they gave us a sort of “boot camp” for us to look and feel like ancient Chinese laborer/soldiers.  The physical training was actually the toughest I’ve ever done and most of it consisted of basically non-stop labor-style exercising.  Stuff like moving heavy things back and forth for an hour, swinging kettlebells non-stop, carrying each other long distances, and lots and lots of calisthenics.  Followed by so, so much running.  Afterwards, we got to train in stunts, Chinese-style archery, marching lessons, and they even gave us horseback riding lessons!  By the end of the shoot, we all felt like we could run FOREVER, and we were in the best shape of our LA-softened lives.