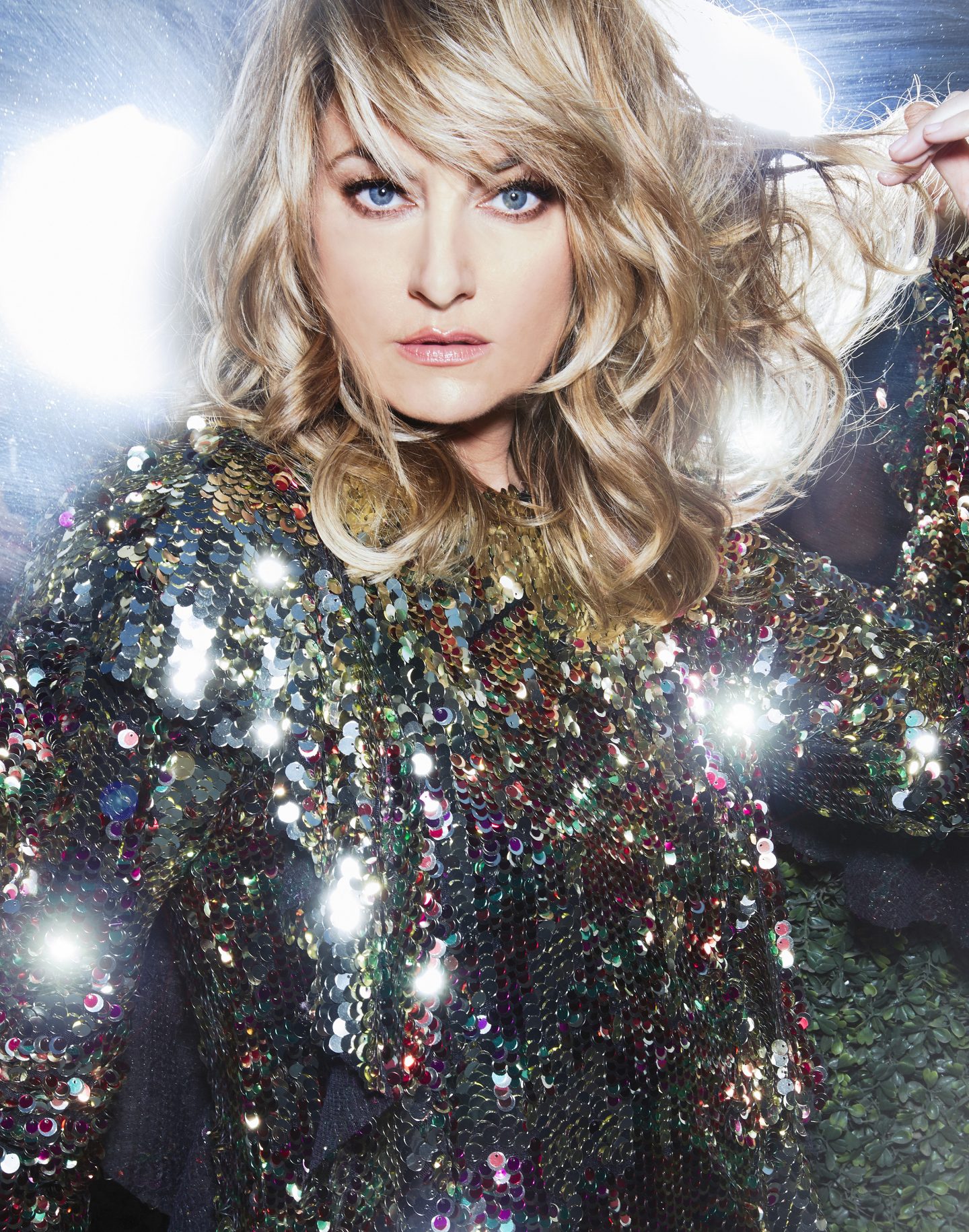 In 1989 she took Hollywood by storm playing Shelly in David Lynch’s juggernaut, Twin Peaks. But with all good film and television stories she has become the queen of the remakes. First reprising her role in Twin Peaks then the ultimate comic book remake, Riverdale. Mädchen Amick talks to Merle Ginsberg on her career being the “IT girl”, to playing the “IT woman”.

At this point, after 30 years in show business, Mädchen Amick pretty much expects everyone to mispronounce her name. “It’s MADE-chen AY – mick,” laughs the 47-year-old actress. “Both have long ‘A’s.’ But even my co-stars get it wrong.” Translated into German, her first name means “maiden” or “girl.” “My part-German parents wanted to give me an unusual name,” she says. “I guess they got it.” “Skeet Ulrich, my Riverdale co-star, has been mispronouncing my name for three seasons!” she giggles. “But I was mispronouncing his – so I guess we’re even.”

Amick plays Alice Cooper (no relation to the goth rocker), mother to perky blonde Betty, (of “Betty and Veronica” fame, played by Lili Reinhart). She bares little resemblance to Amick’s real-life L.A. boho hippie chick: “(Showrunner) Roberto Aguirre-Sacasa wanted to play up that 1950’s blonde Betty Crocker baking mom Stepford wife façade.” Amick describes “Even though the show’s period is purposefully unclear. “We went with very conservative hair and clothes. Lili always laughs because she says my own look’s so much more rock n’ roll. I’m very gypsy, flowy, but with an edge: motorcycle books, big hoop earrings, a 1970’s muscle car – I have a very loud renovated Chevy Nova. I don’t own one single tweed skirt. I don’t own hairspray.”

But you’d never know that by watching Riverdale. Alice Cooper’s Farrah Fawcett banana curls are the very definition of tightly-wound adult Helmut head – versus her giant auburn main on Twin Peaks. But what does it matter when you’ve got a massive hit on your hands? “I’ve had so many times in my career when I thought, ‘this could be something,'” says Amick, who’s had her share of high highs – and low lows. “This was one on the edge: on the one hand, Riverdale brings real nostalgia back. Everyone has fond memories of Archie comics. But they’ve given it such a darker edge, very Twin Peaks, so it brings a younger cooler feel for the younger audience. I knew people would be expecting a comic book show based on Archie to be bright and happy. But ours is a clever resurgence of the idea. Our Archie, Betty, and Veronica are not all good kids – they’re complicated, flawed, have dark sides. We’re mixing genres – nostalgia, kitsch and murder mystery.”

Consequently, Alice has gone through extreme paces: learning her husband’s a serial killer, joining a cult, and losing control of her daughters and entire “stable” small-town life. “Every time I open a script, I have no idea what I’m going to read. Alice has got an insane way of reacting to things. I guess that’s what happens when you marry a serial killer. She’s always running away from her early life – even her current life.”

One thing she loves about Riverdale is the casts’ risky way of handling social media. For instance, Amick posted a photo of herself wearing what looked like an engagement ring, teasing she might marry Skeet Ulrich’s character, Jughead’s mysterious dad FP Jones. Most showrunners forbid casts to post hints about plots. “But Roberto is the biggest champion of that,” Amick explains. “He loves the social media tease. It’s all about getting viewers involved. That’s what’s new for us parent character actors (Luke Perry, Mark Consuelos) vs. the young cast. We’ve learned in two years if you reveal something they tune in more. Even the day before it airs. People love the puzzle. Riverdale is a very social media friendly show. I mean, 8 million Instagram followers versus a million who tune in. It says a lot of our audience is streaming.”

When Amick, who left her small town of Sparks, Nevada, at age 16 to try her luck in L.A. – “I was pretty determined, even then”) – got to Riverdale’s first table read in 2016, she looked around at the attractive young cast brimming with hormones, and thought, “Oh – now I’M the older generation – and these are the hot young things.” “But they’re handling things well,” Amick observes. “It’s fun to watch them go through what we went through in 1990, Though things have changed so much. Riverdale is a huge hit with a million viewers – but 8 million Instagram followers. And we stream, live tweet, etc. The original Twin Peaks had 8 million viewers on tv.”
Amick’s career has had a circuitous path – starring in the Twin Peaks movie Fire Walk With Me (1992), the 1993 film Dream Lover, 2011’s Priest, then transitioning back to tv: arcs in CSI:NY, Californication, Damages, Gossip Girl – and of course, Showtime’s reboot of Twin Peaks last year (yes, Shelly’s still a waitress). But it’s gone somewhat circular with Riverdale: the tale of a wholesome small town’s teens and adults plummeting its dark supernatural soul owes much to David Lynch and Twin Peaks, not at all unintentionally: “Roberto’s the first one to say how much he reveres Twin Peaks – he’s a huge David Lynch fan. What’s funny is – I never thought Twin Peaks would make it. I was sure it was much too weird. Then it became iconic – David changed television more than anyone. He knows the effect Twin Peaks had – but he still has the attitude he’s a misfit, a Hollywood outsider. And David is right to a certain extent. I’ve had lots of highs and lows in my career, and when we talk about that, he says, ‘Success is relative. No one in Hollywood thinks of me as a money maker.’ He’s a realist. And he was so far ahead of his time.”
Despite her unusual and uptight characters, Amick’s also a realist. “I’m pretty grounded in life,” she says. “I started my career at 16 on my own. There were SOOOO many times not knowing if I’d get another job – my husband and I pulling rice and beans off the shelf. But jobs have come around pretty steadily mostly because I didn’t have any recourse! In this up and down industry, you can easily drop your sanity. But it’s always been about the long game for me. I never got caught up on being a starlet. It was always the long game.” A game, at this point, she appears to be winning.

Shot on location at The Chamberlain Hotel in West Hollywood