Home » THE ORVILLE’S J LEE AND HIS LEAP OF FAITH 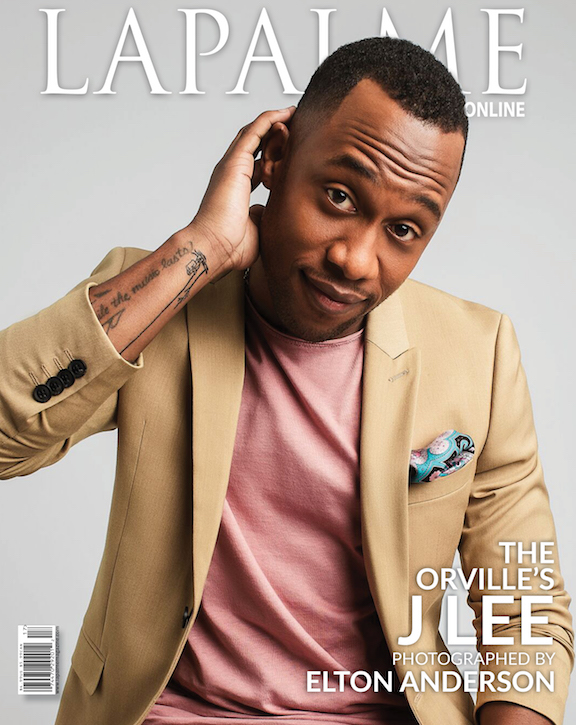 Born and raised in St. Louis, Missouri, J Lee began classical piano lessons at the age of 3. He performed at Carnegie Hall at the age of 12, and eventually went on to receive a music scholarship at Indiana University’s renowned Jacob’s School Of Music. After graduating in 2005 with a Bachelor of Arts in Piano Performance and Theater and Drama,

J Lee took the last $200 he had and headed west for Los Angeles to begin his professional entertainment career, sleeping in his car until he could afford an apartment of his own.  Times were tough, J Lee persevered and eventually landed a job as the receptionist for Family Guy.

This opportunity would begin to open doors for him in Los Angeles, Beginning with a voice over as a “black leprechaun” character in one of American Dad’s  cutaway gags. This would lead him to voice several characters on Family Guy and The Cleveland Show.

Deciding he’d become “too comfortable” in his job as receptionist (and later production assistant), he left Family Guy in 2007 to work on his own material full time.

It was a few years later when Seth Macfarlane and Lee’s paths would cross again as he was cast in the role of LT. John Lamarr on the The Orville.

We had the chance to speak with Actor JLee from about his personal life, what it’s like working with Seth MacFarlane and his role as Navigator John LaMarr on the Fox comedy / drama  THE ORVILLE. 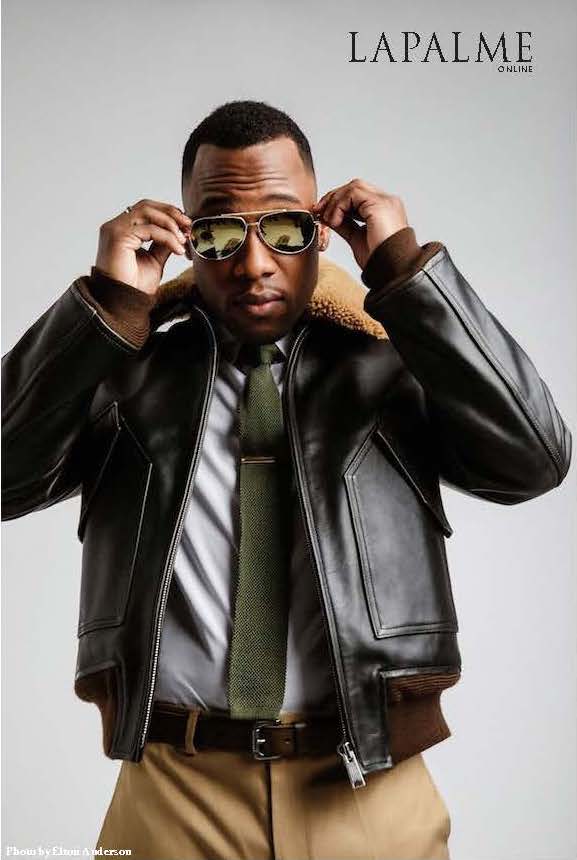 You are a multi-faceted creator, where do you think this originates from? I feel like I have always been an artist.  Whether I’m writing scripts, acting, playing sports, and talking or giving advice, I think I always approach things from an artist’s mindset.  My mother said when I was 3 I used to wake up in the middle of the night and go downstairs and bang on the piano. She then got me piano lessons and it’s something I really connected with.  I went to Indiana University on a piano scholarship and while there I took advantage of all sides of myself. I stayed busy throughout college. I was president of my fraternity Alpha Phi Alpha, step master of our step team, played intramural sports, ran track for a bit, added theater and drama as another major and was doing plays.   I feel like being multi-faceted was just always a part of me.

As a native of St. Louis, do you think you would have eventually reached some of the milestones you have made if you hadn’t taken the leap to move to Los Angeles?  I love being from St. Louis.  St. Louis taught me a lot and really instilled a solid work ethic and a certain mindset.  My mom always used to say, “Focus on your mission. Not your position.”  I think no matter where I was, I would have found a way to express myself and create art. It just so happened that I made the choice to come to LA. But had I gone to NYC or Chicago, I like to think I would have made something happen. I also think that whatever talent one has, it will always find a way to shine if you allow it. 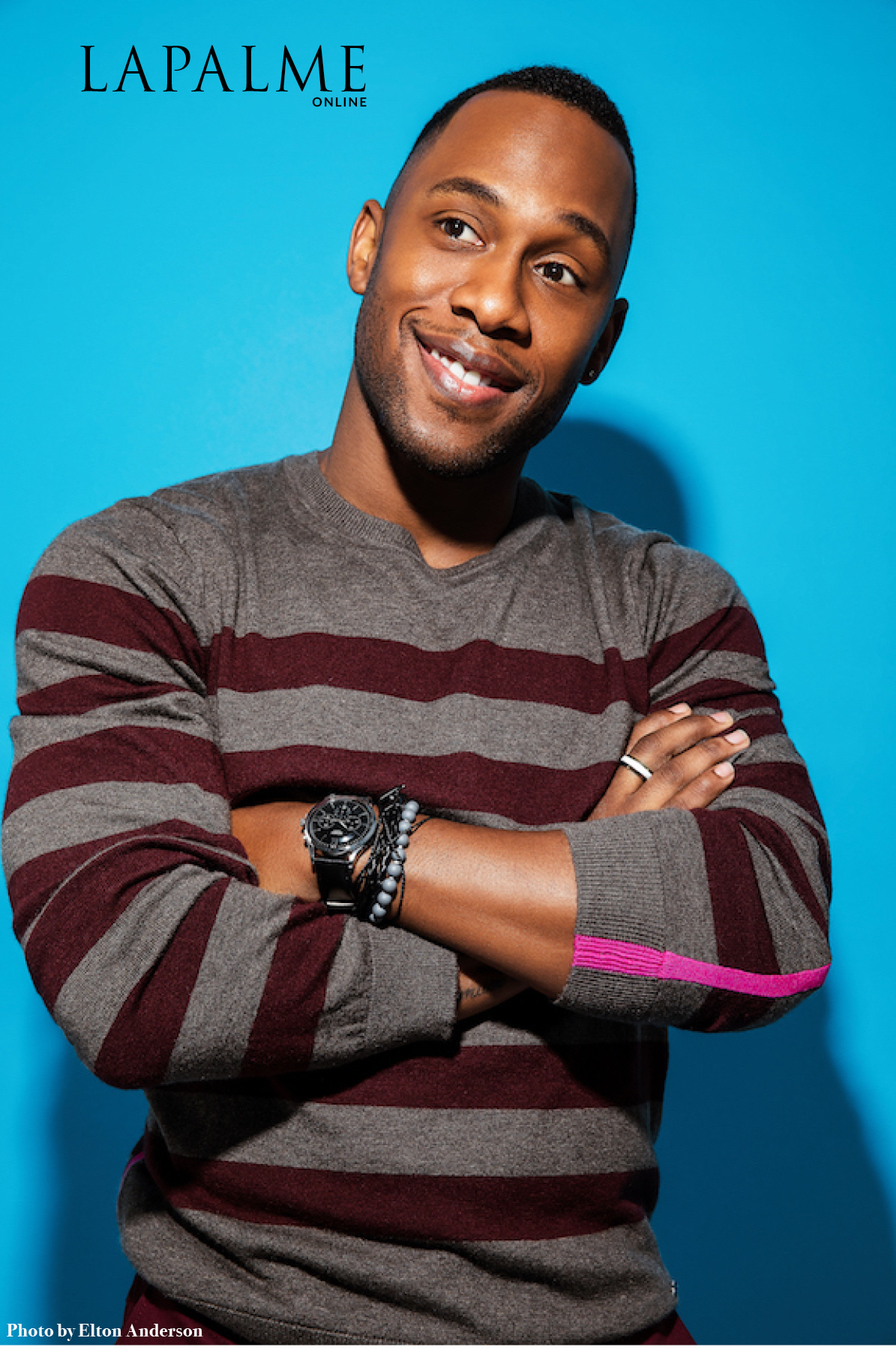 Looking back now, would you have advised someone in your particular situation to do the same? Ha. Sure!  For me I didn’t mind sleeping in my car and being broke and being told no all the time. It just made me stronger and gave me more motivation.  But every time I wrote a script and someone said “no” to it, I would go write another one. Every time I got passed over for something, I would go back and work harder.  You’re going to run into rejection and setbacks all the time.  It’s how you react to it that matters. If you’re the kind of person that realizes there is no losing, only winning or learning, and you fall in love with doing the work and believe in yourself more than others doubt you… then yeah. I say jump out of the plane and know that your parachute will open!

Do you consider yourself a Hollywood insider? Are you a red carpet, turn-up at party’s type of guy? Who is J Lee? Nah, I definitely wouldn’t say that. What I can say is that being in this industry for so long and taking the path I took, I was able to sit back and watch and learn a lot from my peers who were finding success  and finding their lanes.   I learned a lot on what to do and what not to do.  I’m the guy who will probably always sneak my own candy into the movies or be on the dance floor at a movie premiere after party rather than talking shop. 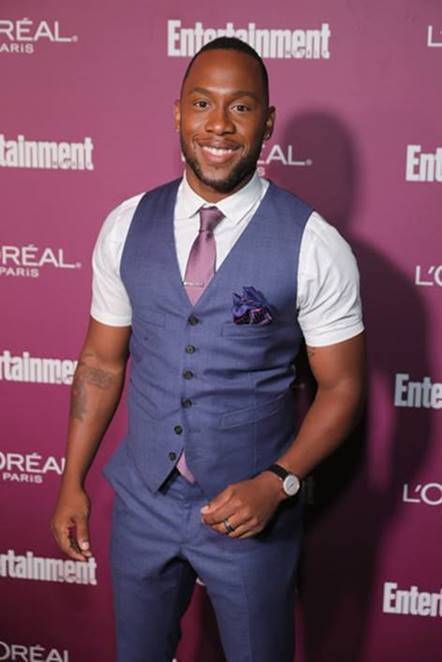 You had a great gig working in the Family Guy offices, what made you leave to pursue your own material? I worked at Family Guy for a little over 2 years. And I remember the day I felt like I couldn’t leave the job because I was dependent on the money was the exact day I knew I had to leave that job. It was amazing and one of the best things that ever happened to me.  I met some of the most amazing and talented folks there.  Friends I still have to this day. It really is what set me on the path of adding writer to my resume.  But I knew it was time to leave and create my own projects and do my own thing. I knew my parachute would open 😉

How closely based is the character Lt. John LaMarr on THE ORVILLE to your own personality? It’s loosely based on me but the more I play John LaMarr and really step into his shoes, the more I find things that are very different for John and myself.  He’s outspoken and funny, but John can be very cerebral at times and a quiet observer.  Seth wrote the character with me in mind so we both say “boom.”  Boom.

How much are you involved in with the writing on THE ORVILLE episodes and concepts? Seth did most of the writing for season 1 along with an amazing staff of writers he put together. Seth is very open to ideas with the entire cast and since I have written on one of his shows before, it makes it easy to toss out any ideas or thoughts I have when it comes to the scripts. However, he and the writing staff did such an amazing job, it made our jobs easy.

From your perspective, what type of guy is Seth MacFarlane? A genius. He’s literally the hardest working dude I’ve ever met. He still does all of his characters on Family Guy and American Dad, is the lead and EP of The Orville, just got nominated for another Grammy for his latest jazz album, creates a show like Cosmos and then can go off and make a film like Ted or host the Oscars or disappear in a cool role in a Soderbergh film. But he’s also just a good dude who is one of my best friends. He has done a lot for a lot of people that goes unspoken. 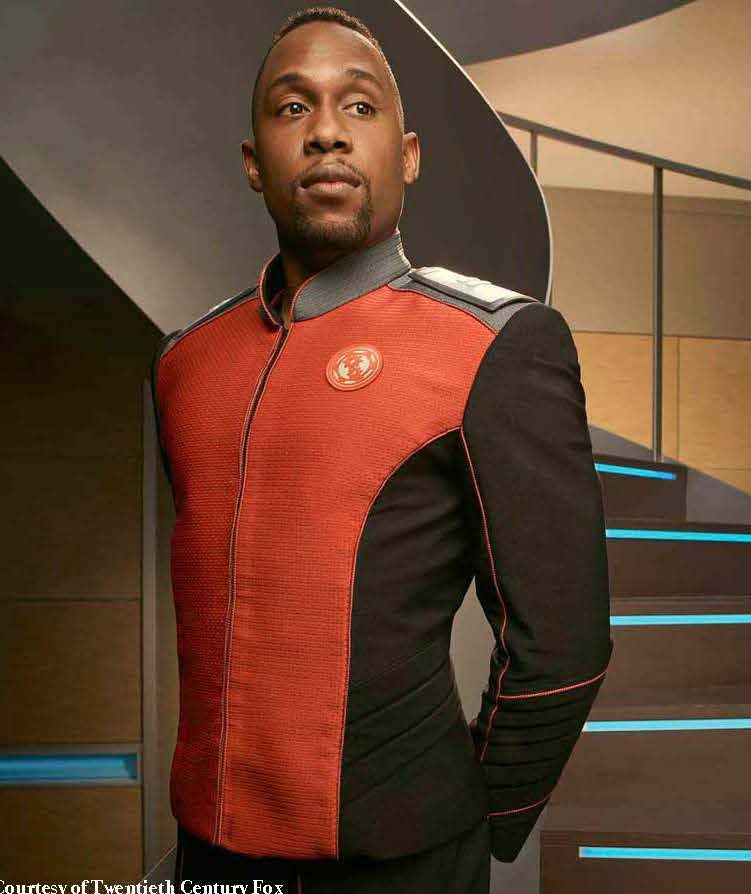 You and actor Ahmed Best (famous as the man behind the cgi character Jar Jar Binks) have a project coming out that Seth MacFarlane is executive producing called 2 Black Dudes. How did that project come about and how long did it take to come to fruition? 2 Black Dudes is a show that I wrote, created and starred in. I had the idea based on my life growing up and being from St. Louis. I asked Ahmed to come on and play the other dude and independently shot seven, 5 minute episodes. I had a screening and Seth came and fell in love with the show and he came on as my executive producer. By the way, Ahmed Best is the s**t.  I think he was unfairly crucified playing Jar Jar Binks. Because even though some people hated the character, you gotta look at the work he put into creating that character and being a pioneer in the motion capture space.  Just look at Jar Jar, He was a clumsy, lanky, awkward, gangly alien. Ahmed Best is literally the opposite of that.  He was an all-state track athlete, has been a martial artist his whole life and has a black belt in jiu jitsu.  For him to create that character with no blue print in the space was remarkable to me.

When you look forward in your career, what other creative outlets do you see yourself partaking in and what draws you to them? I just want to keep making art and hopefully inspire people to follow their dreams, be happy, love each other and do better. I plan to continue writing, directing, acting, playing piano, producing, motivating, parasailing, hacky sacking, back flipping, deep sea diving, high-fiving, waffle-making.. I don’t know. I want to do it all and enjoy it all. You only get to go around once!

The Orville airs Thursday at 9/8c on FOX 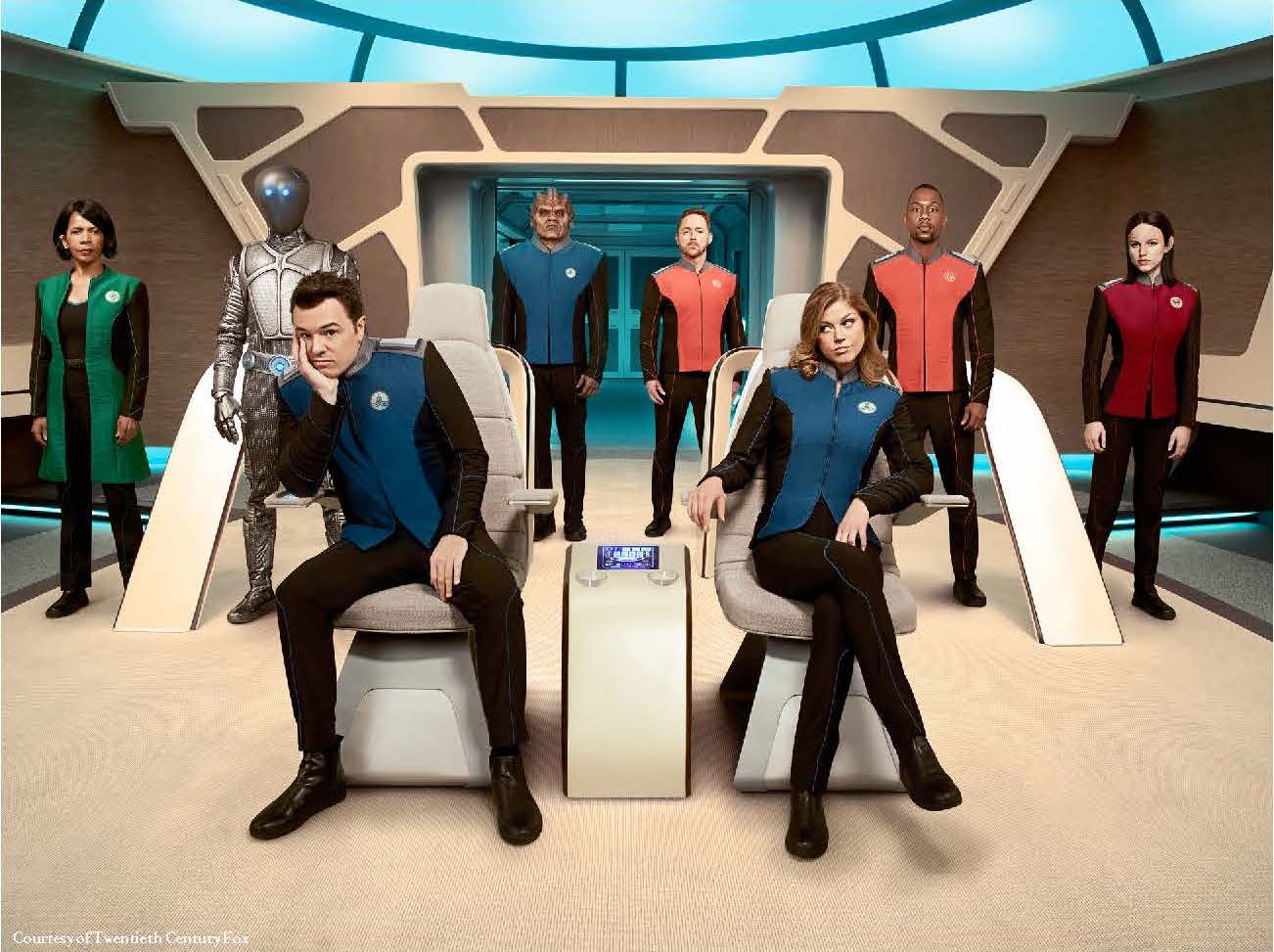