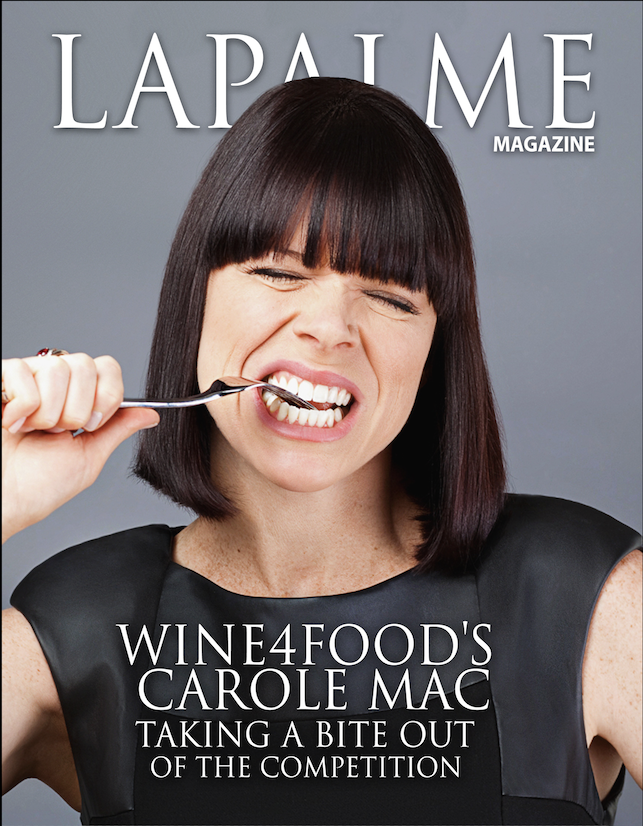 With over 15 years of experience in the food and wine industry, Carole has created 125+ episodes featuring the world’s top chefs, sommeliers, and winemakers. She currently creates, produces, and hosts web shows on Wine4Food.com, including Somm School Insider, a 7-episode series following her journey inside the Sommelier Society of America.

She began her food and wine career by creating a culinary event company in Chicago, offering private chef dinners, cooking classes, and wine pairings. After selling that company, she honed her journalism skills as a columnist for several publications, including Edible Communities. She later became Editorial Director for the James Beard award-winning food journal Rosengarten Report.

Her film Oh My Rødgrød! was selected to appear in the New York City, Chicago, and Devour Food Film Festivals, and her Amazon bestselling children’s book The Gift of the Ladybug has raised over $25K for children with life-threatening illnesses.

Her educational background includes a BA in marketing with Academic All-American honors as Captain of Michigan State University’s gymnastics team and an International MBA from Henley Business School in the United Kingdom. She has been featured on CNN.com, ABC, CBS, and NBC and written about by Glamour, Thrive Global, Social Life Magazine, and contributes to Lapalme Magazine.

Take us through your Wine & Food journey that led you to your work with Wine4Food.com.

I joined Golden Ram Imports, the wine import company that owns Wine4Food, back in November of 2011. At that point, I had created and operated a culinary event company in Chicago, tried my hand at my family business of real estate, realized that real estate was not my dream career, returned to food and became a columnist in Ohio, and dreamed of having my own food show in New York City. So I reached out to my colleagues at Edible Columbus for opportunities in NYC. By divine intervention, I was put in touch with Sylvia Golden, the fabulous and talented owner of Golden Ram Imports. Eventually, I was hired, packed my things, and moved to the big apple. Over the years, I consulted with Golden Ram as a Digital Editor, Editorial Director, and eventually secured my dream and started a video arm under the brand Wine4Food. For the last four years, I’ve created, produced, and hosted wine and food shows on Wine4Food.com, following the best sommeliers, winemakers, and chefs in the world. Dreams really can come true!

Speaking of Wine4Food, what differentiates the site and content from others in the same genre?

Wine4Food specializes in delivering inside scoop from top sommeliers, winemakers, chefs, recipe writers, and industry experts. We are your connection to the best food and wine secrets in the world. Our videos, articles, and recipes pair the tastiest food with the most fitting wines so that you can enjoy the best bites and sips on the planet.

Your latest creation under the #Wine4Food banner is Somm School Insider. Tell us about the creation and what you want viewers to take away from the series?

Somm School Insider is a seven-episode series that helps you become a wine expert in under 10 minutes. I came up with this concept when I was shooting Follow That Somm, a series following NYC’s most talented sommeliers. I learned that sommelier’s palates were among the most extraordinary that I had ever witnessed, and I had to learn their secrets. So I enrolled in the oldest wine school in the country and distilled the lessons down into bite-sized episodes so that you can learn with me. When you watch this series, you will learn how to drink like a somm, in real-time, with real instructors, but skip the expense and time commitment that somm school requires. And it’s FUN!

Here is what viewers are saying:

“I’ve never seen anyone make wine so much fun!”

“Thank you for simplifying wine!”

“I’ve learned more in 12 minutes watching your show than I did reading entire books. Bravo! Thanks, and I LOVE your show. More please.”

What is next under the Wine 4 Food Banner?

We are launching an Instagram Live series A Somm at Home, featuring somms in their homes, dishing about the wines they love, what they are currently drinking, and what you should drink next (@wine_4_food). We will also be releasing the final two episodes of Somm School Insider. Plus, we always post exciting wine pairing articles and recipes.

You’ve authored a children’s book, The Gift of The Ladybug, which is a very close and personal take relating to your own experiences. Tell us about that journey?

The Gift of the Ladybug is a magical children’s book that shares the lessons that I learned from my dearly departed son TJ. Despite living with a terminal disease, TJ lived more powerfully than anyone I’ve ever known. He taught me how to love fiercely, live powerfully, laugh often, stay in the present, and embrace my life exactly as it is. My journey began 12 years ago when the doctor said, “Your son may not see his second birthday.” That moment was the most challenging moment in my life. As I sat with this news in my car’s passenger seat driving home from Cleveland Clinic, reeling, and in agonizing pain, I saw a flash in my mind. It was like a dream. Just as my family was standing in a circle in that drab doctor’s office with TJ in my arms, I saw horses standing in that same doctor’s office with a ladybug in my arms. The horses were sobbing because they just learned that their ladybug would live a very short life. The ladybug looked up at me, his horse Momma, and said, “Why are you crying? I’m a ladybug! And I don’t know how to be a horse. I only know how to be a ladybug.” I realized that this flash was going to save all of us. This flash represented the way TJ lived every day. And this flash was a metaphor for how we would get through losing TJ. Instead of relating to TJ as a boy with a tragic terminal illness, we related to him as a ladybug or a perfect soul who was living his exact right life in the exact way that it was meant to be lived. We related to him as the strong, wise, peaceful, and perfect boy that he actually was.

Once TJ passed, I promised myself that I would share TJ’s story to help other children dealing with a terminal illness. Several years after TJ passed, I published The Gift of the Ladybug on his birthday. It became an Amazon bestseller, and we donated all proceeds to the United Mitochondrial Disease Foundation. Since then, I’ve used the book to send brain cancer survivor Ivory Dakota Isaac on her first trip to New York City, surprise mitochondrial disease warrior Katie Hebert to an American Girl doll party in Texas, and raise $25,000 for children with a life-threatening illness and their families. This book, what it represents, and the work I’m able to do with it, is what I’m most proud of in my life.

Where do you see yourself in the next five years?

In the next five years, you will find me bellying to some incredible bar in NYC, sharing a meal with the chef. Maybe, cycling or kayaking upstate. Speaking to audiences about my memoir, helping children’s ladybug wishes come through my involvement with Make-A-Wish, and shooting Wine4Food and Netflix popular series that helps people transform their lives through food and wine.

Where can readers find the latest episodes of Somm School Insider, follows Wine4Food, and you personally?

You can watch Somm School Insider onWine4Food.com, Apple TV, Amazon Fire TV, Binge Networks, and on Roku globally, and be sure to check out wine pairing videos, articles, and recipes on Wine4Food.com. You can also find me on CaroleMac.com and @Carole.Mac.