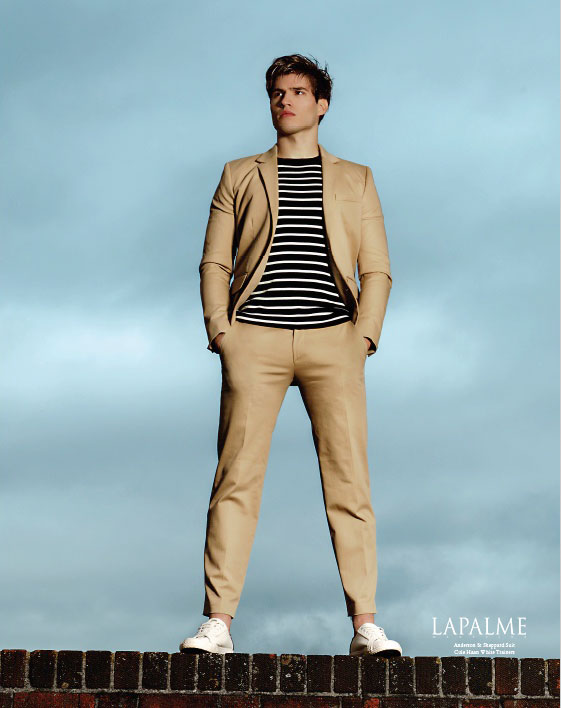 LAPALME Magazine had a chance to sit down with the future Hollywood icon Cameron Cuffe for an exclusive interview.

Not-so-coincidentally, we have chosen a ‘superhero’ for the Spring 2018 cover of LAPALME Magazine. He’s one of the few great actors who will write their own Destiny. Cameron, a relative newcomer who was mostly performing in small live productions and indie films before being launched in the DC Universe. The London-born actor stars in the upcoming science fiction drama, Krypton, from Warner Horizon Scripted Television. The series, premiering on SYFY in March 2018. Revealing a chapter of the DC Universe that has rarely been told, Krypton is set years before the Superman legend we know. Cuffe plays the lead role of the Man of Steel’s grandfather, Seg-El, as he brings hope and equality to Krypton, turning a planet in disarray into one worthy of giving birth to the greatest Super Hero ever known. Cameron Cuffe has been busy making appearances to promote the science fiction drama, Krypton. ‘’Acting is the same game’’. When asked how he relates to the character of Seg-El; Cameron retells the story of an acting job when he was a c. The job paid him 100 pounds. Cameron said ‘’I never realized people got paid to act until then and I never thought I will play such an inspiring role in my life’’. While he enjoyed the process of acting and preparing for his role in Krypton, he learned a lot about how people can change the world in better ways every day through simple things.

‘’Focus on yourself to change the world for the betteris kind of a requirement when your grandson is Superman’’ said Cameron during the interview. ‘’Seg’s lifestyle is pretty rough. He has to fight to survive, literally.’’

In a surprising admission, Cameron said he has been acting since he was nine years old, and later embarked on his acting Career. Acting had been a passion since he was a child. Cuffe joins young British actress Georgina Campbell, who was cast in the pilot as the female lead of Lyta Zod.

Even more than other superstars of his generation, Cameron Cuffe is building a personal mythos as complex and compelling as his career. In a sense, he’s managed to position himself as one of the most inspiring actors from Hollywood. As Seg-El, Cuffe fights to redeem his family’s honor and save his beloved Kryptonian world from chaos.

‘’I spend most of my time at the gym. I focus a lot on the character I am playing and it is important for me to train myself as much as I can to give my best for it. The things we carry define us, just as much as we define them.’’ said Cameron about how much time he spends training for his character.

‘’I choose to focus my time, energy and conversations around people who inspire me, support me and help me to grow into my happiest, strongest, wisest self. And through my character I want to inspire others to change the world for the better, exactly like Seg.’’

Having trained at The Lir Academy, Cuffe was amongst the first year of graduating students from this new venture formed by Trinity College, Dublin and the Royal Academy of Dramatic Art (RADA). Following graduation, he appeared in the Park Theatre production of David Hare’s play The Vertical Hour and in the Donmar Warehouse production of Larry Gelbart’s City of Angels.

On screen, Cuffe’s recent work includes Stephen Frears’ Florence Foster Jenkins with Meryl Streep and Hugh Grant and a recurring role on ITV’s The Halcyon. Being on set with Meryl Streep was ‘’very inspiring’’ said Cameron Cuffe during the interview.

Keep up with Cameron at his ig: thecameroncuffe

And look for Krypton on SYFY Network.