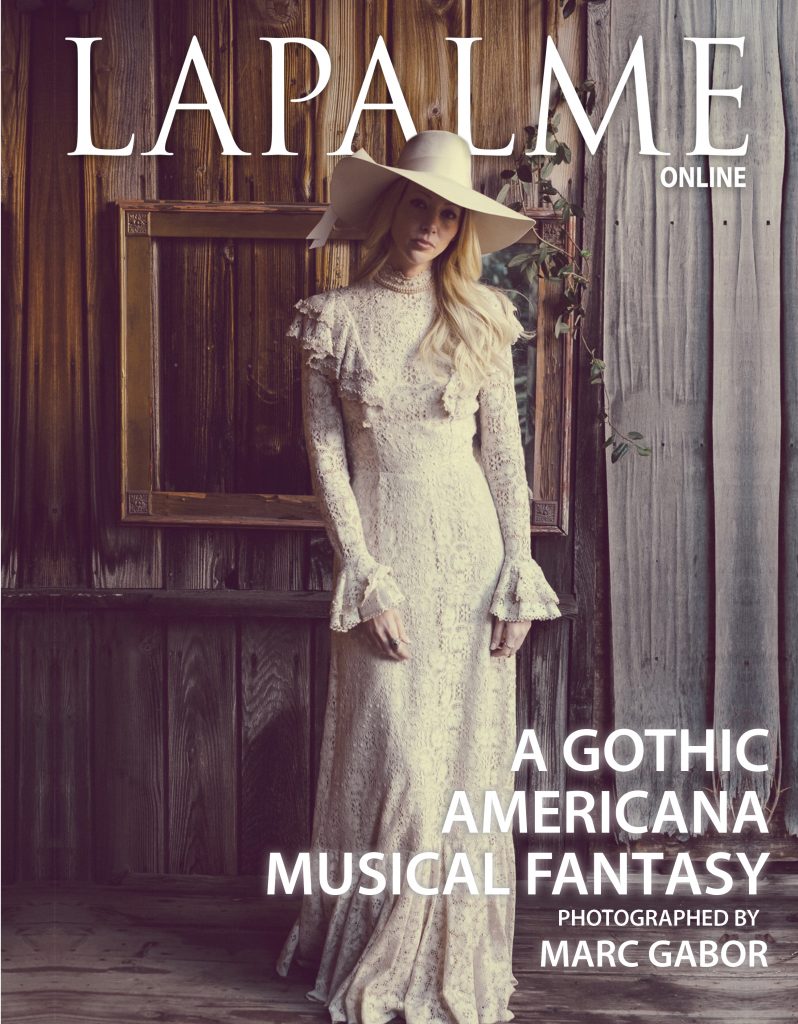 With her delicate yet commanding vocals, Julie Mintz has a rare ability to turn the most nuanced of feelings into songs that captivate. On her forthcoming full-length debut, the L.A.-based singer/songwriter muses on longing and disillusionment and romantic confusion, an exploration made all the more enthralling by her moody and luminous take on Gothic Americana. But in choosing a title for the album, Mintz landed on Abandon All Hope of Fruition— a phrase that speaks to the transformative power in trading yearning for acceptance. 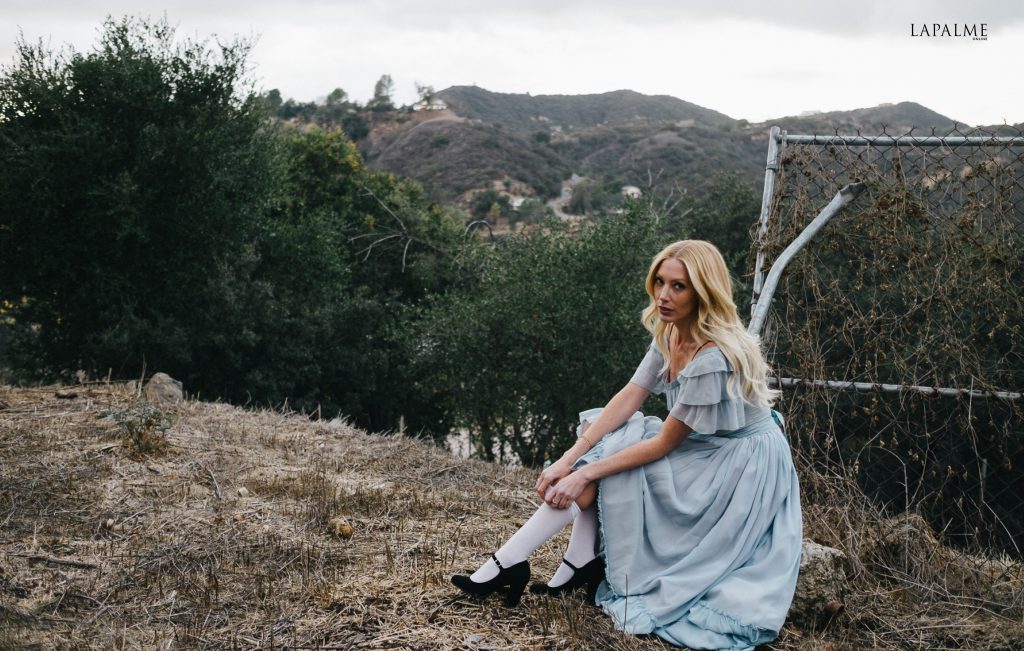 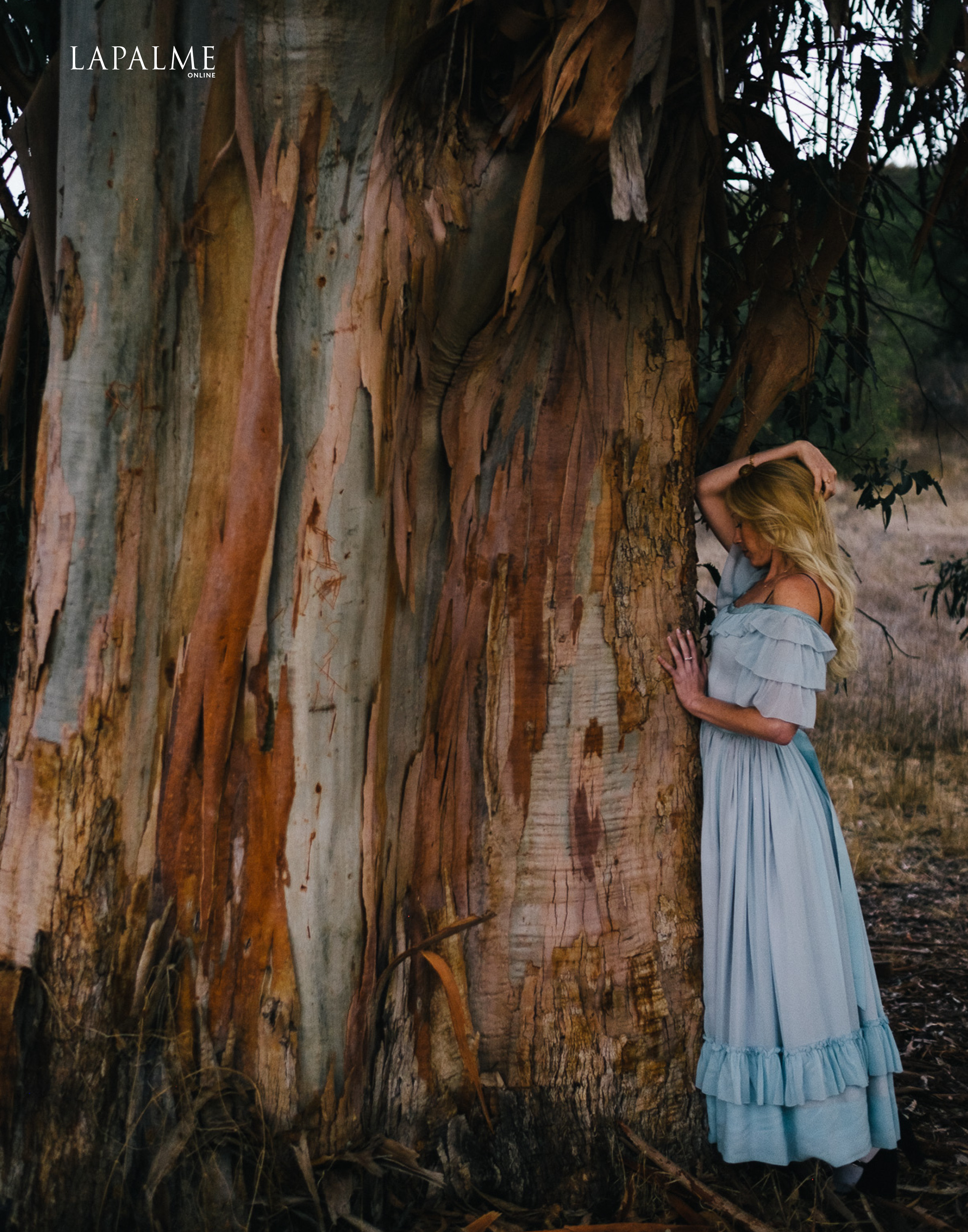 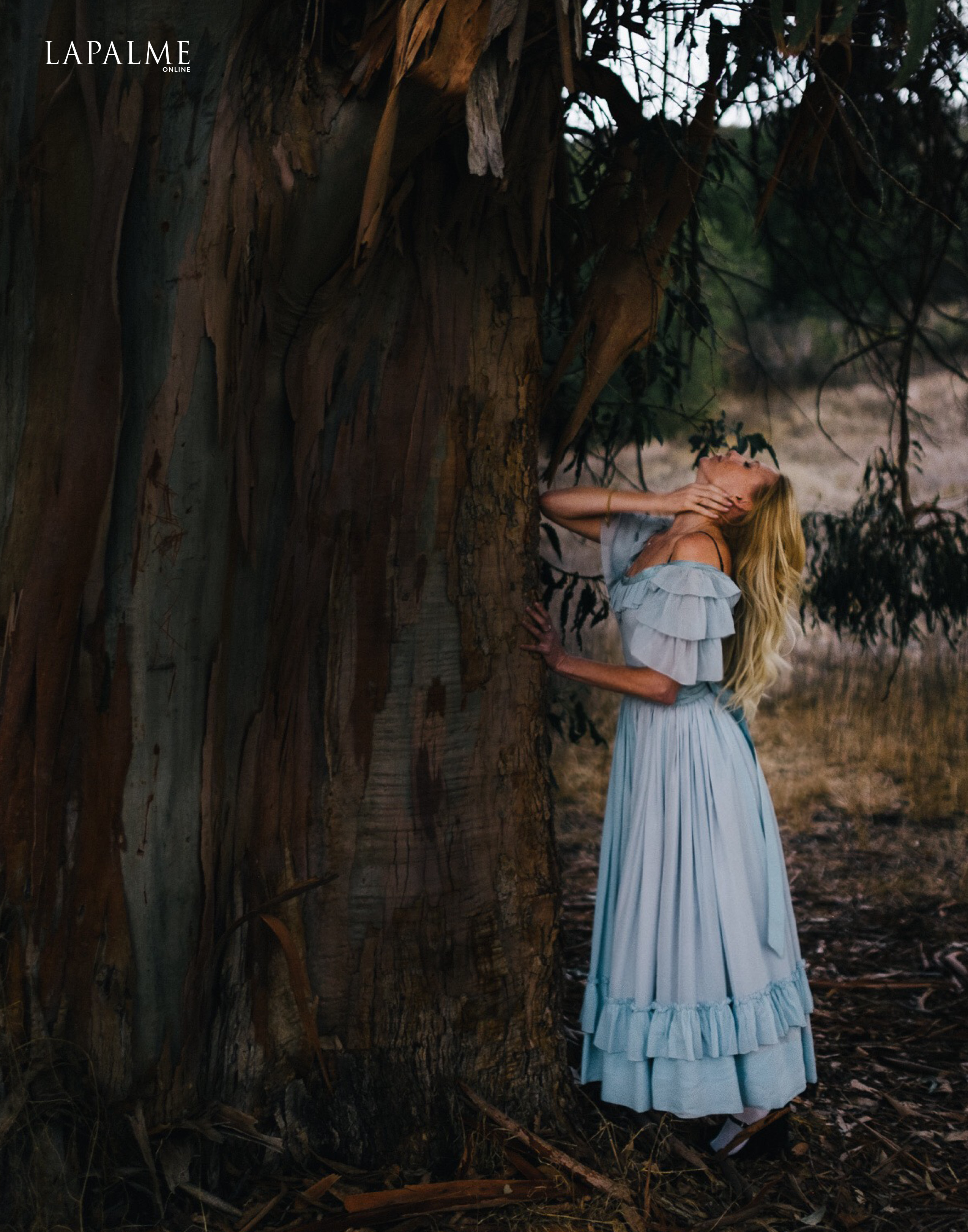 Born and raised in the South Texas city of Corpus Christi, Mintz grew up on the bittersweet balladry of classic country artists. “My dad loved Patsy Cline—her greatest-hits album was always playing when I was a kid, so now my ear naturally goes to that old-school-country chord progression and the melody that comes along with it,” says Mintz. Learning to play piano as a little girl and later picking up a guitar as well, Mintz also held true to country’s emotional tradition and gravitated toward “sad songs about love and heartache” as she began crafting her own material. Through the years, she’s also found the mood of her songwriting deeply informed by her first-ever experience in the workforce: an after-school job working in a funeral home on the Gulf of Mexico, which included driving a hearse with a body in the back. “I was a cheerleader in high school, so I used to show up at the funeral home in my cheerleading uniform,” Mintz recalls. “At the time it was all really scary to me, but I think it ties into me eventually writing this very Gothic music and this thread throughout my songs about the idea of dying alone.” 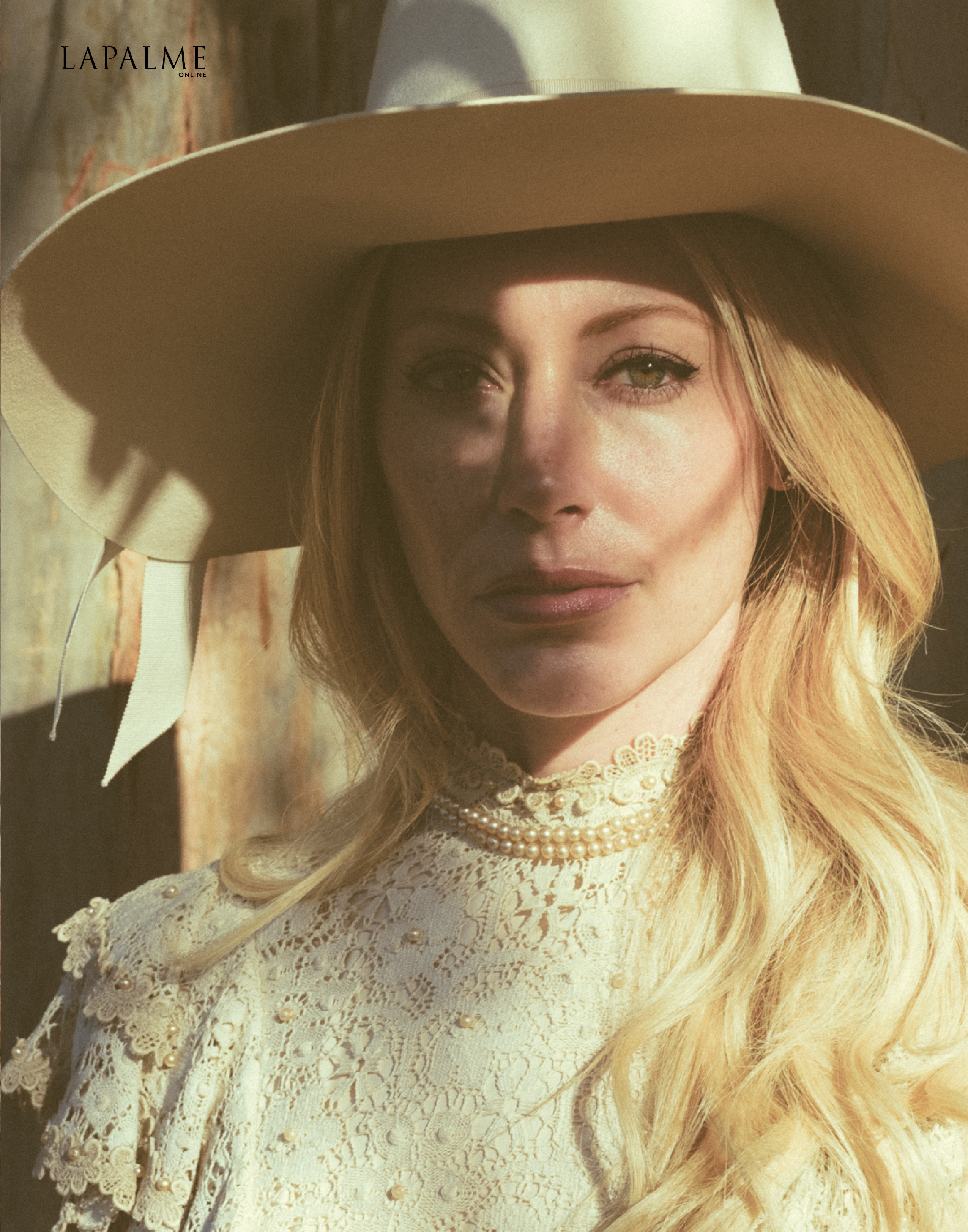 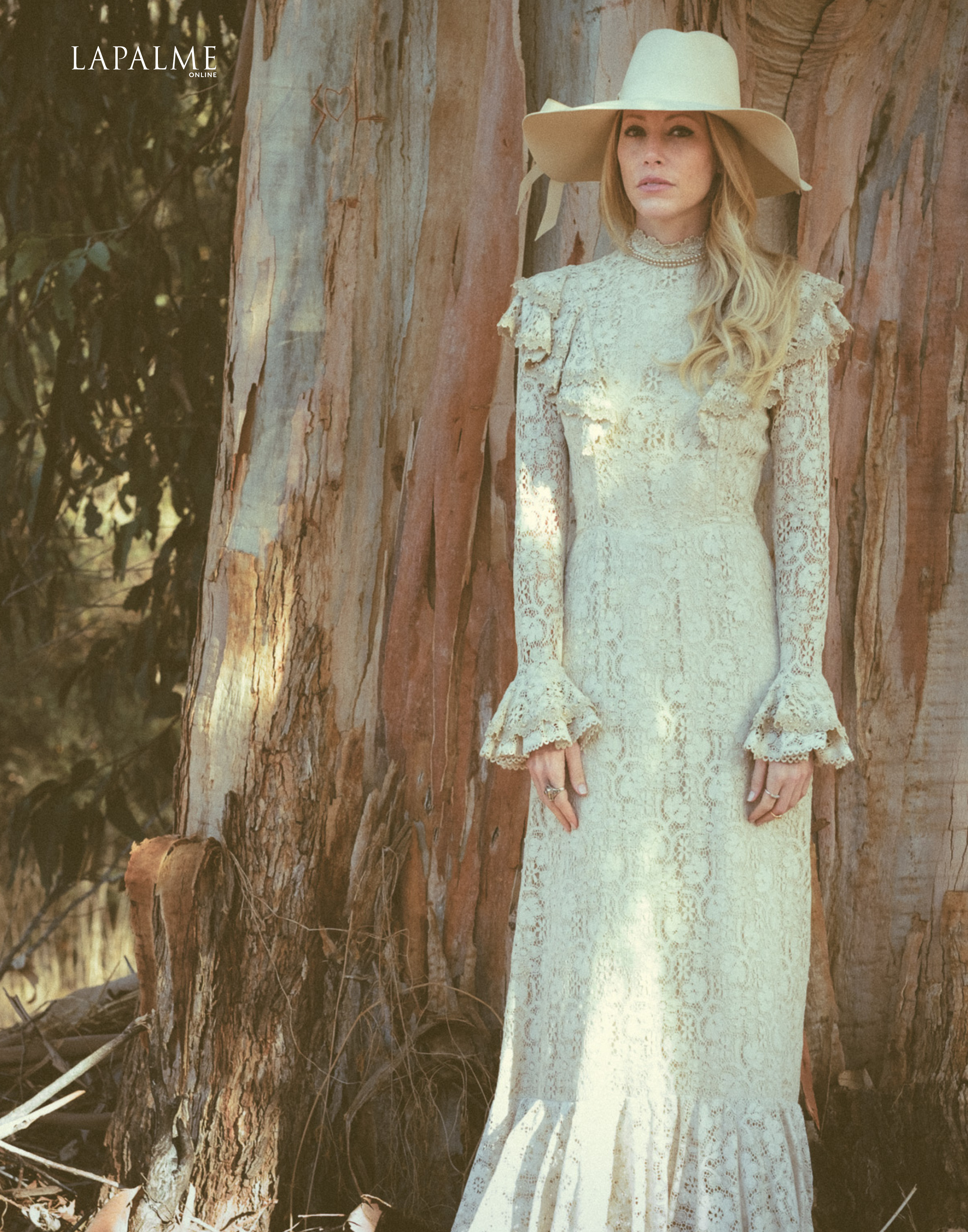 While attending Emory University, Mintz studied neuroscience and behavioral biology, but ultimately decided to forgo medical school in favor of pursuing her music career. Still, Mintz points out that both fields of study have shaped her approach to songwriting. “I’ve always had this desire to understand the inner workings of my mind and other people’s minds, and that’s so much of what I’m doing with my songs—just trying to work out those curiosities,” she says. Along with releasing The Thin Veil, Mintz has spent much of the past few years on the road with Moby, recently joining him onstage at the Hollywood Bowl for a show presented by legendary English DJ Pete Tong, in addition to appearing on The Late Show with Stephen Colbert.

Now gearing up to join Moby for his debut performance with Gustavo Dudamel and the LA Philharmonic in October, Mintz is planning a summer release for Abandon All Hope of Fruition. And in reflecting on the emotional experience of making the album, she expresses a hope that the songs offer some sense of solace to each listener. “It seems like a lot of people struggle with the same kind of issues I’ve written about, so I’d love for the album to help them to appreciate the present instead of being stuck in hoping for something different in the future,” says Mintz. “But at the same time, I’d also love for them to just feel like someone else understands what they’re going through, and to take comfort in realizing that they’re not alone in that feeling.”

Growing up you were an artistic child what were some tunes you used to sing around the house?

In my childhood home my Dad seemed to have Patsy Cline’s Greatest Hits on repeat, so you could always find me singing “She’s Got You” or “I Fall to Pieces”. I also remember loving gospel and spiritual songs like “Wade in the Water” which my parents probably thought was a little unusual considering I was raised in a Jewish household. But as a little girl was always drawn to moody songs and asked my piano teacher to show me exclusively blues songs, so in retrospect, I was already laying the foundation for the melancholic music I write today.

Who has been your music muse/your main influences and why?

Love is certainly a fickle muse, but I find that pining for love has been particularly influential in my songwriting. I would say heartbreak and my struggles in romantic relationships have been my main impetus for the songs that I write. 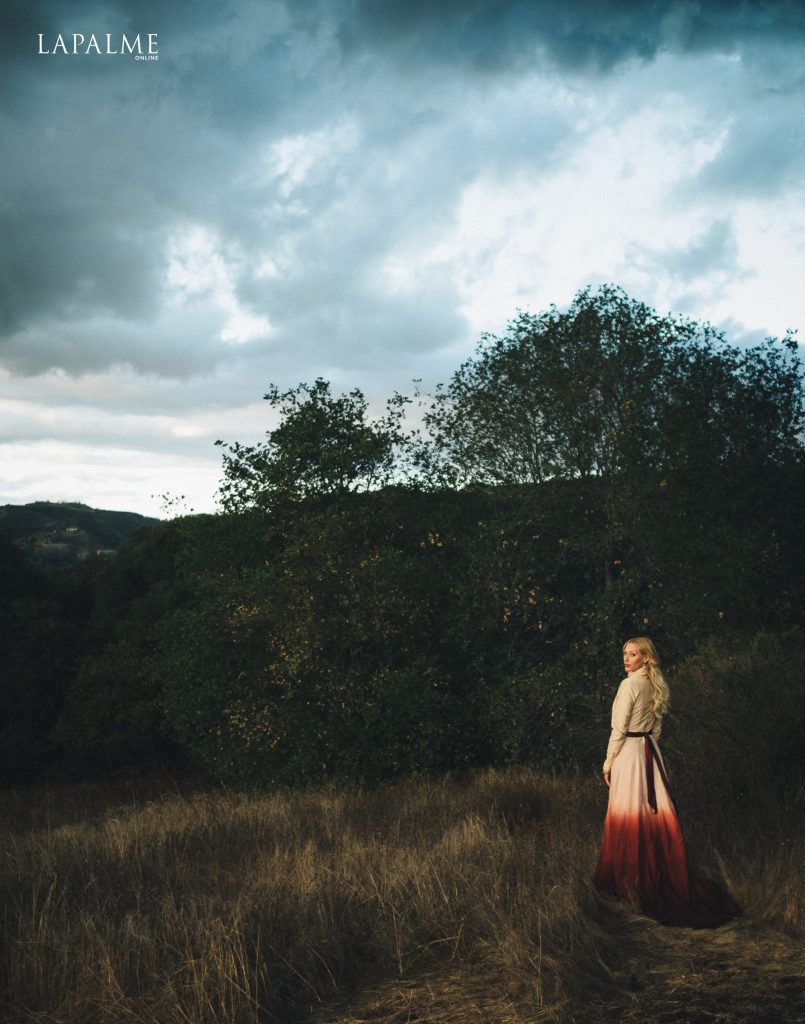 It’s easy to give up on our dreams and settle for a regular day job. You used to work in the medical field, can you tell us the exact moment you knew that that life was not meant for you?

I majored in Neuroscience and Behavioral Biology in college and as part of my pre-med training, I shadowed an Oncologist at Atlanta’s Grady Hospital. I remember the exact day he was making rounds on a patient who was a young mother in her twenties with two small children. This woman’s cancer was terminal, and I cried for the rest of the day at work and realized that I was probably too sensitive to do that day in and day out. I have the utmost respect for doctors and nurses; it’s one of the most important jobs in the world. I just think my sensitivity is better suited to the arts.

We know every artist is different. How would you describe your personal style and sound?

I categorize my music as Gothic Americana. It definitely has a gothic feel in that I am telling darker stories about my inner world. And you’ll hear very Americana, classic country, and folk-based influences in my music because I grew up in South Texas listening to June Carter Cash, Dolly Parton, and Joni Mitchell. At the end of the day, I will always love the sound of pedal steel and a solid story song.

What are some of the pre-show rituals you have to do before you hit the stage?

Even though I love writing songs, making music, and the feeling of connecting with people who are moved by my music, I still battle the same stage fright I’ve had since I was a little girl. To counteract that anxiety, I try to sleep at least 10 hours (even more if I can!) before a show. I find I feel less anxious when I’m well-rested. I also have to keep to myself and not chat too much with anyone before I play live. I just need to go into my head and try to manage my irrational thoughts before getting in front of a room full of people. 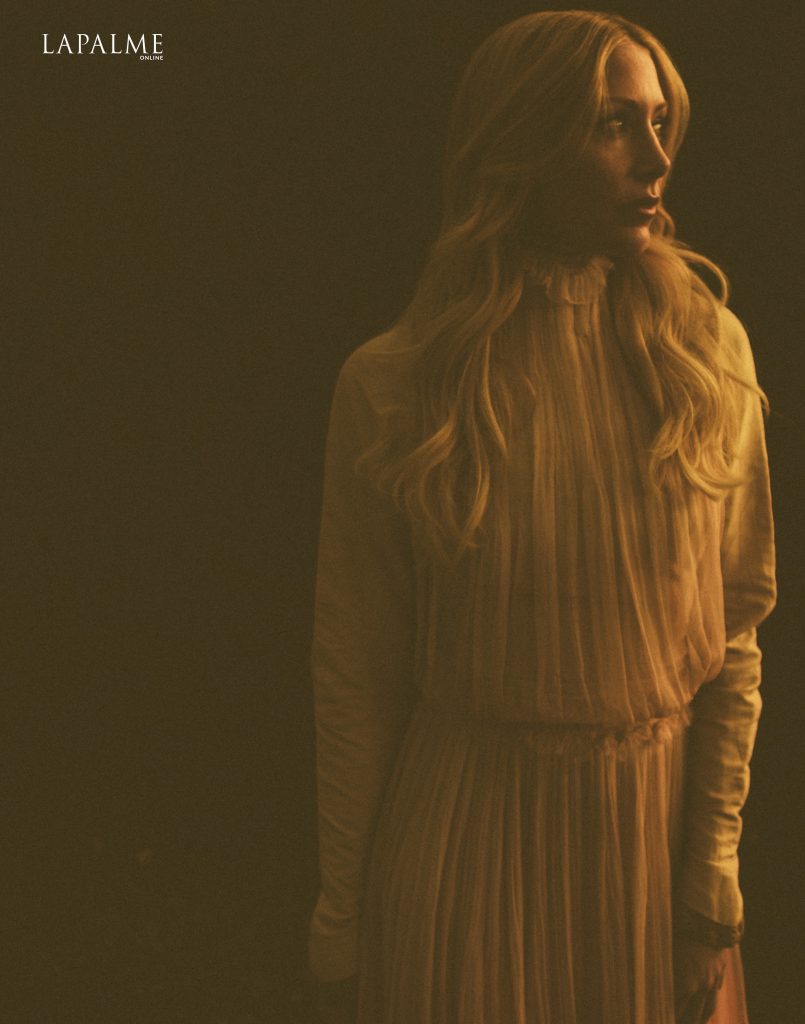 Can you share any details about your upcoming album? And any other projects you are working on?

I’m excited about is the September release of my full-length album “Abandon All Hope of Fruition”. I wrote all of the songs on the album aside from a dark cover of John Denver’s “Take Me Home Country Roads” which I’ll be releasing as a single in July along with a 360 VR music video. Additionally, I’ve been lucky to collaborate with superstar musician and producer Moby. I play and sing in his band, and he wrote 2 songs on the album and produced several of the tracks. My first single that’s out now “The Sorrow Tree” was written and produced by Moby and also has a really beautiful music video that is inspired by the Darren Aronofsky film “Mother”.

Where did you draw your inspiration for some of your tracks?

During the writing of “Abandon All Hope of Fruition” I was in the depths of comparing and despairing and dating unavailable guys. You can really hear that on “Hard Needle to Thread” and the push and pull of a back and forth relationship on “Bow and Arrow.” My song “Want to Feel Wanted” also explores staying in an unhealthy relationship for the wrong reasons. Overall, I drew the album title inspiration from the teachings of the American Tibetan Buddhist nun, Pema Chodron. She wrote a book called “When Things Fall Apart” which really describes what I was going through while I was writing these songs. She says that to abandon all hope of fruition is to let go of expectations of how we think things should turn out and focus on the beauty of what we have in our lives right now. That really helped me cling less tightly to some of the longing that was keeping me from appreciating all of the good things I do have in my life.

In this day and age, there are so many beauty standards and young girls feel the pressure to reach a certain level of perfection. What are some tips that you have that help you stay true to yourself?

I have struggled with perfectionism my whole life, so I really understand that trap. I think it’s about finding a balance between accepting the things that make you unique that you can live with and working with the things that will give you more confidence, within reason! For example, I really love my freckles and I’ve always fought to show them off and not have them covered in heavy makeup because they are so unique to who I am. But, of course, there are other little things that are easy to change and I think it’s worth it if it adds to your confidence. Case in point: I have naturally frizzy hair, and it makes me feel better about myself when my hair is done. So that’s something that I treat myself to when I have a show or I’m going on a date. But it’s also taken me a long time to learn that the people that matter in my life are going to love me even when my hair is crazy and frizzy. In fact, I think I probably have a picture taken of me by every boyfriend I’ve ever had where my insane morning hair gave us such a laugh that it had to be photographed! So for the imperfections, you can’t change, at least learn to laugh at them. 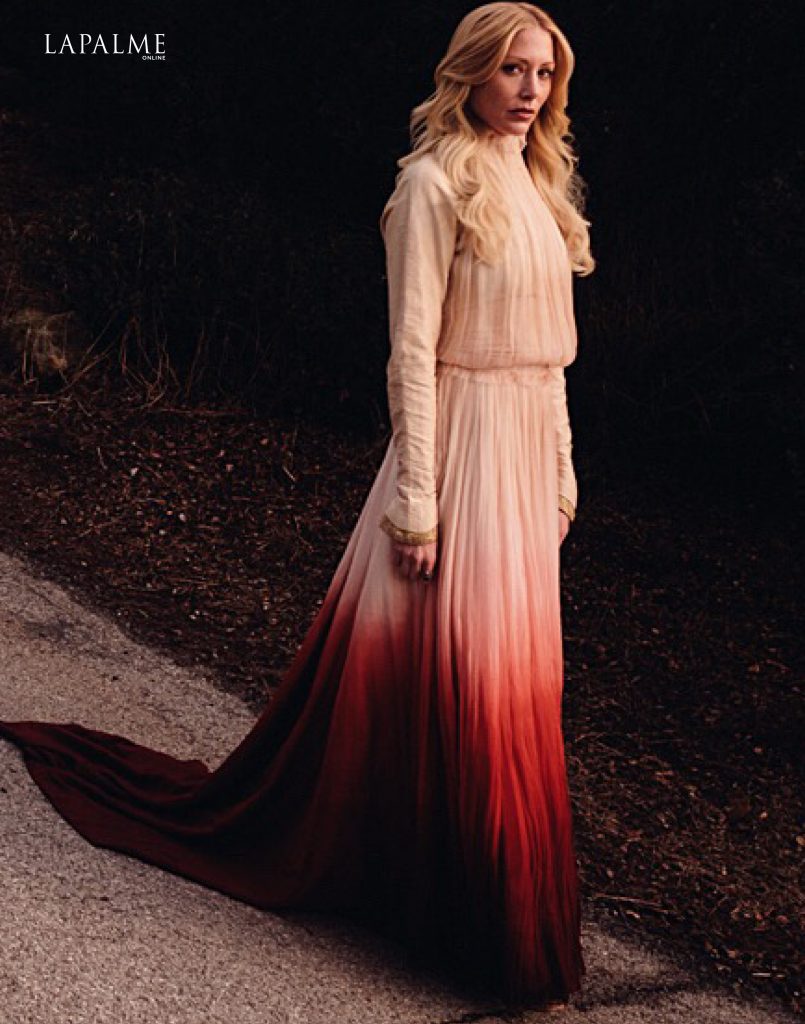