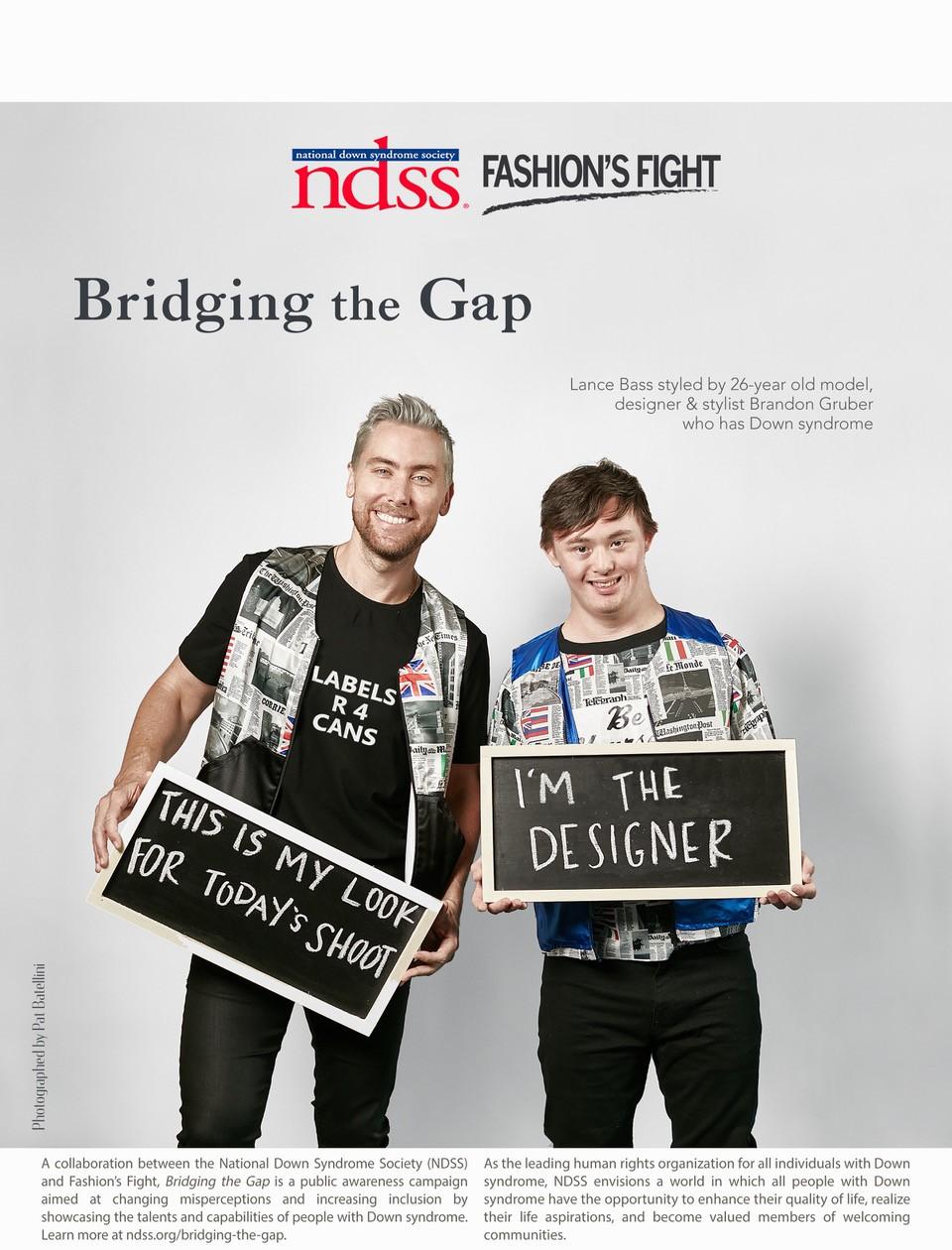 Bridging the Gap is a public awareness campaign aimed at breaking down misperceptions about Down syndrome. Join us as we continue this journey to increase inclusion and showcase the many talents of abilities of our loved ones. In partnership with Fashion’s Fight, this campaign connects individuals with Down syndrome with celebrities who are passionate about our cause. Together we will show the world what our community is capable of!

“Extra” recently caught up with Lance Bass while he was on set with fashion designer Brandon Gruber as they shot a PSA for the National Down Syndrome Society.

The PSA focused on Down Syndrome awareness and acceptance. Lance shared, “Love this campaign. It’s all about inclusion and you know, not fitting people in a certain box.”

Brandon, who has Down Syndrome, said it was “quite big” for him to get to style Lance in his very own designs.

Brandon stressed the importance of working hard and being authentic.

Lance raved about Brandon, saying, “He’s so happy and it’s admirable… we can do whatever we want to do and nothing can hold us back.”

Lance and Brandon’s PSA will also be featured in the December issue of Los Angeles magazine.

Bass also discussed the possibility of reuniting with his *NSYNC bandmates, two decades after their final tour. He said, “It would be lovely to do another concert. That would be fun to do.”

Lance also said he was “happy” to see his longtime friend Britney Spears return to the music scene, courtesy of her new single with Elton John. He added, “I’m just so glad that she’s back doing her thing.”

Lance is doing his thing, too, gearing up to throw a birthday bash for his twins Violet Betty and Alexander James. He admitted, “The first birthday, they’re not gonna remember a thing, so we’ll do something here in Los Angeles and that has to be Halloween-themed because they’re born on October 13.”

Lance is also making a movie with Danielle Fishel about their real-life ‘90s romance. He noted, “I could not believe how quickly this was sold.”

Though their romance didn’t last, Lance and Danielle “remain very, very close.” The movie will start shooting “next year.”

Will you help us Bridge the Gap?

Help us pursue our vision of a world in which all people with Down syndrome have the opportunity to enhance their quality of life, realize their life aspirations, and become valued members of welcoming communities.

Learn about Brandon’s work with NDSS

Sign up for our newsletter to get more involved

For more on about the National Down Syndrome Society, visit NDSS.org!