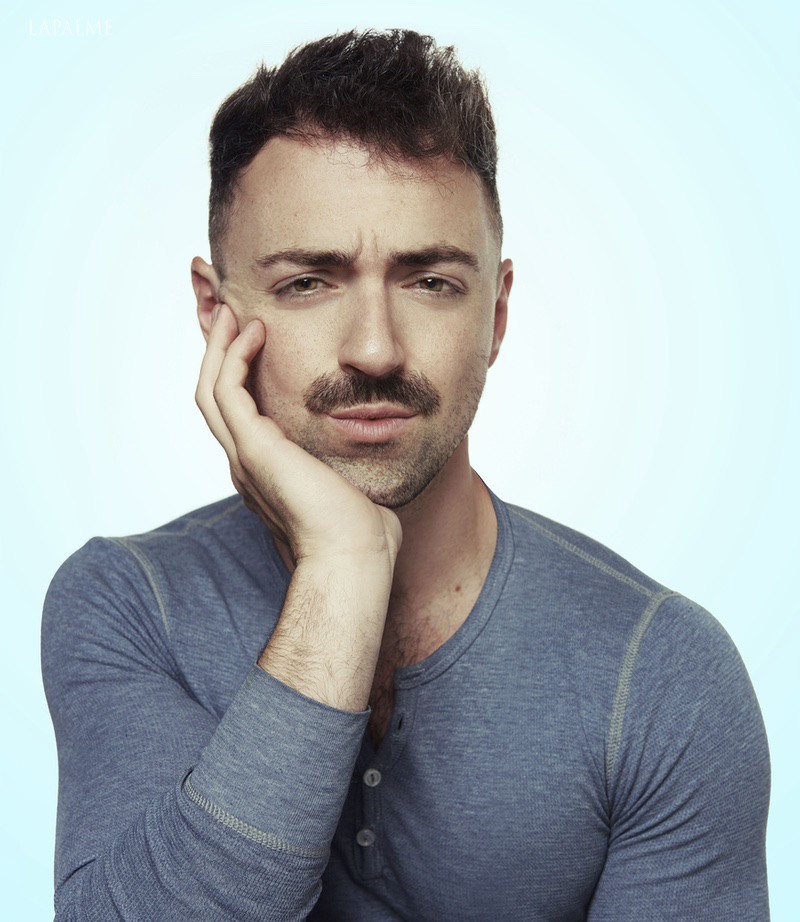 New York-based comedian & Italian cuisine aficionado, Matteo Lane, has taken the world by storm with his quick-lipped stand-up comedy routines, and his off-the-cuff, hilarious cooking videos on YouTube. Matteo, whose stand-up special can be seen on Netflix’s “The Comedy Lineup”, has also appeared on “The Late Show with Stephen Colbert” “Late Night with Seth Meyers”, and HBO’s “Crashing”. Passionate about his family, Italian cooking, The Barefoot Contessa, and, of course, stand-up comedy, Matteo Lane has truly found his recipe for success. I recently had the opportunity to speak with him about his current comedy tour in the US, his mother’s “Gus” biscuits, and so much more!

CL: What inspired your passion for cooking?

MATTEO: My mom. My mom was very smart, and my mother is Italian and Mexican. So obviously there are a lot of cooking genes in her blood. And she did something that I really appreciate now as an adult, where she made cooking dinner every single night a fun event. My brother, sister, and I were all one year in a row. So, I’m 35, my sister’s 36, and my brother’s 37. We’re like little ducklings, and every night she would have us help her make food and she was so patient and wonderful. Even with things like making pizza dough and watching it rise, she made cooking, not only fun but also something that seemed easy, and natural and was a great way of, looking back now, raising a family through food and culture and of remembering your culture. So ever since then, I’ve always loved food, I always feel very comfortable in the kitchen, I love cooking, and I always cook for friends. You know, my dream is to somehow become rich enough to have a house big enough for a dinner party!

CL: I lived in New York for 10 years, I can totally relate! Now is there a dish that was a staple in your household that your mom would make all the time or even one that was passed down through generations?

MATTEO: Obviously things are very American Italian, like meatballs and spaghetti and red sauce, that kind of stuff, but actually my mom makes something that’s not Italian. That’s my favorite fucking thing, and every time I come home, I beg her to make it. She calls them Gus biscuits, based on a TV series called Lonesome Dove.

MATTEO: Oh yeah, it’s a favorite in the household; my mother loves it. So she found this recipe of really American style biscuits, where you get a frying pan, one of the big cast iron skillets, and you put in some kind of fat or Crisco and then make your biscuits, which are flour, salt, buttermilk, you know, like a classic biscuit. But then you put the cast iron pan in the oven and let that Crisco start to really get hot, then you take it out and put the biscuits in it and let them finish cooking in the fat in the oven. Then they come out and the bottoms are so crispy and yummy and full of fat, and you just smear salted butter on it. It’s my favorite thing on the face of the planet.

CL: I already need a nap.

MATTEO: Oh yeah, once you have it, forget it, throw caution to the wind; you know what I mean?

CL: You need a comfortable pair of sweatpants right?

MATTEO:: You need a comfortable coffin. I mean, it really will get you good. But God, I love those. So, that’s my number one thing that my mom makes, and in my house, we call them Gus biscuits.

CL: Now what’s your secret ingredient for the perfect Carbonara?

MATTEO: I think its secret ingredient would really be the assembly. Pasta water emulsifying with the egg yolk, using Pecorino Romano and Guanciale. Don’t use bacon, don’t use Parmesan cheese. Keep it authentic. And people say…I can’t get Guanciale where I’m from… yeah you can, you have the internet, order it. We all seem to forget that the internet exists – like order it!

CL: Why is pasta water so important in your dishes? I figure that it is as you’ve incorporated it in some of your episodes.

MATTEO: Pasta water is really important because it’s an ingredient. The starches from the pasta release in the water, which is why you’re not supposed to put olive oil in your water. Think of your pasta as like a steak. You wanna season it well, you don’t wanna overdo it. And then if you have a red sauce – for example like you’re cooking a red sauce in a pan like a Pomodoro – take that pasta water when it’s real starchy and bring a little bit of into that red sauce, and that starch will stay in the red sauce and allow the pasta to cling to it, or the sauce to cling to your pasta, as you’re finished cooking it in the pan.

CL: Okay, wow, that’s amazing. Your knowledge of Roman-style cooking is incredible. Were you professionally trained there? Or how did that skill come about?

MATTEO: No, I just love cooking and I love Rome’s cooking specifically, even though I’m partly Sicilian. But I just love Roman-style cooking so much. I learned Carbonara from this group of three Italians called Carbogang – three Italians who live in Milan and who specialize only in Carbonara, and when I went to Milan, they brought me to their house. Three young, hot Italians, and they’re like probably 25, and they’re living in their Nona’s old house. It’s this giant apartment and they just make Carbonara – their whole Instagram is Carbonara – and they taught me the authentic way to make Carbonara di Roma. They’re the real way to do it!

CL: I gotta say, I’m completely obsessed with your iconic portrait of the Barefoot Contessa in your kitchen. I remember seeing Ina Garten & Jeffrey in Williamsburg Brooklyn at the Smorgasbord food festival several years ago; it was the first time I’ve ever got starstruck.

CL: How did that portrait come about?

MATTEO: I went to the Art Institute of Chicago for school, and I worked as a storyboard artist and fashion illustrator for years, after I graduated; I was a professional illustrator. I did commercials for Lexus and 7UP and makeup ads and shoes, which is what brought me to New York. But during our graduation, they set up this giant gallery and everyone picks a wall and you’re supposed to put up something that represents you. And of course, you went to an art school, so you know, they had people dressed up in sandpaper, walking around offering lipstick to people etc.. I think that was just the comedian me, and I thought, oh, what the hell do I give a shit about these people? Do you know what I mean? Like, who cares? So, I just fucking did it.

I literally just got back for Italy. I saw what everyone was doing; it was so pretentious and so ridiculous, and I thought, ah, I love the Barefoot Contessa, so I just did this big painting of the Barefoot Contessa, and I wanted it to look like a landscape. I wanted it to look like a cartoony kind of landscape mixed with Alla Prima, for this portrait. I put it up and what’s so funny is that some people kind of just walked by like they didn’t really get it, but my teacher, Marion Kryczka, who I loved, loved it. He walked up and he started screaming, I love it Mateo, look at her tit, she looks fucking great, this is fucking great Matteo! He was a real old school, Polish, Chicago, goes fishing on his lunch break kind of guy, and he loved it. So that’s all I cared about; I made Marion happy.

CL: I see you’re currently on your comedy show tour. Congratulations! I live between New York and Miami, and I’m super excited that you’re coming down here to Miami. How is tour life treating you?

MATTEO: Tour life is pretty ridiculous. It’s a lot of airplanes, it’s a lot of solitude. You’re by yourself a lot when you’re touring. It’s so weird, cause you’ll spend the entire day by yourself, not speaking to anyone, you get on a plane, you wake up really early, you fly for hours, you get your hotel, you try and get a nap, you try and eat healthily, you’re still not talking to anyone – and then someone come picks you up in a car and five minutes later, you’re in front of 2000 people. You’re like: Oh God – the first person I’m talking to today is a crowd of 2000 people. What is this? but I love it This is the first time I’ve really sold tickets and I’m having a bit of a moment. It’s really exciting for me to be able to have an audience, enjoy that audience and share my comedy with them and build an hour. I’m having a great time.

CL: So I’ve got two last questions. It might be controversial, but I wanna know what the real difference between Italians from Long Island is and Italians from Italia?

MATTEO: I think the core is always the same. I really mean this sincerely. I think the core of when you’re Italian and you grow up Italian, even though I go to Italy a lot and I see Long Island a lot, or Jersey, the family structure is still the same. The caring of the family, the nurturing, your cousins are your best friends. You know your aunts and uncles, you know your grandparents. I feel very blessed to have grown up in Italian culture. I have a lot of friends who aren’t Italian, and I think Latinos and Italians have a lot of similarities in this. I love that I’m 35 and I have a wonderful relationship with my grandparents, and they helped raise me and it’s a community; you’re raised by a community and there’s not a day that goes by I don’t talk to my cousins. I love my family and I love that I was raised with my cousins to be my brothers and sisters. And they are still my best friends today and that is directly from Italy, and Italy still functions that way.

The other difference would be that sometimes with immigrants, when they come to the country, it kind of freezes that culture, so to speak. So certain Italian cultural things that are in America are like looking back at a time machine, what is was like 80 years ago; what is this? Obviously, immigrants came here and it stuck and that’s what it meant to be Italian. So Americans have sort of preserved an ancient Italian culture from like 1890. So Italians preserve their culture pretty well.

CL: Lastly Matteo – What do you know for sure?

MATTEO: That Maria Callas is the greatest singer to ever live.

CHRISTOPHER LOGAN
Christopher Logan, Lapalme Magazine's Culinary & Culture Editor was born into a family with a passion for cooking and entertaining. Pulling references from the foothills of the Blue Ridge Mountains to the vibrant taste of Miami, he is a culinary provocateur in his own right. His unique and original recipes bring a sense of adventure to the table focusing on creating restaurant achievable cuisine in the comfort of your own home. Food styling and wine pairing are two of his passions. Christopher currently resides in NYC & Miami.