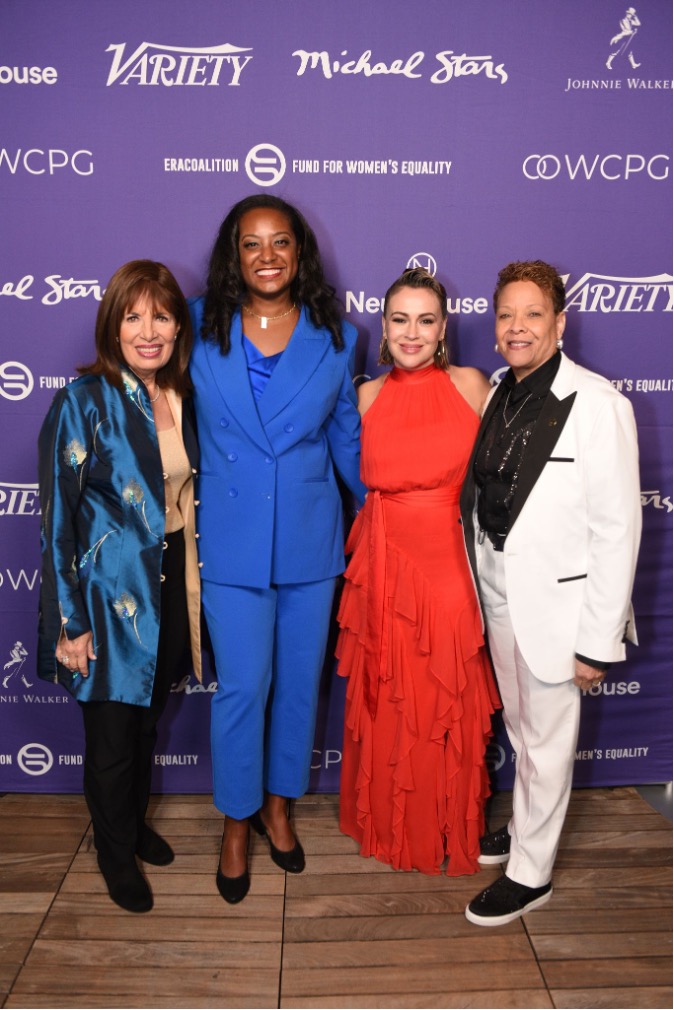 Los Angeles, CA ––  Sara Weinstein’s WCPG spearheaded Variety’s The Fund for Women’s Equality honored the most outstanding legislators and advocates for Women’s Rights at a cocktail party in advance of the Academy Awards on Sunday. The awardees dedicated their lives to fighting for equality for all and to publishing the Equal Rights Amendment to the Constitution.

“More than 50 years after the Equal Rights Amendment passed Congress, it’s a great honor to stand beside these women who have dedicated their lives to achieving true equality,” said Carol Jenkins, President, and CEO of the ERA Coalition / Fund for Women’s Equality.

“The time is now to publish the ERA to the Constitution. The Status of women in America, we need the Equal Rights Amendment to achieve true sex equality. Even though we are ready to stop marching, we can’t and won’t stop until the Equal Rights Amendment is enshrined in the Constitution.”The Constitution should be the bedrock for our fundamental freedoms, not an apologist for bad behavior. That’s precisely why we need the Equal Rights Amendment.
And when 85 percent of United Nations member countries have placed the ERA in their constitutions, it’s past time that we do the same,” said Congresswoman Jackie Speier(CA-14), Co-Chair of the Democratic Women’s Caucus. “I’m proud to be part of an exceptional group of she-roes and activists fighting to recognize the ERA as our 28th Amendment. Simply put: there can be no time limit on one quality!” What a fantastic event tonight with so many ERA supporters.

I was moved by the opportunity to be honored with Alyssa Milano, Congresswoman Jackie Speir Carol Jenkins, and Jennifer Carroll Foy. Amazing and tireless fighters for the ERA. I was also energized by the women and men in the audience to finish the fight… The fight for Equal Pay, equal protection under the law…and to create a world where Equality REALLY belongs to everyone.No time limit…” said Nevada State Senator Pat Spearman.

“We must have the strength of conviction to not give up or give in. Sex discrimination must end with our generation. It is past time for us to enshrine the ERA in the U.S. Constitution,” said Jennifer Caroll Foy, a former Virginia Delegate who passed the ERA in Virginia.

The cocktail party also featured appearances by additional special guests who joined to show their support for publishing the Equal Rights Amendment to the Constitution and to celebrate the honorees.“Adding the Equal Rights Amendment to the Constitution is not only a national issue. It’s personal. I want my daughter Bella to grow up knowing she has the same rights as every man in this country.

And I want my son Milo—and every boy in America—to know that too. They deserve a government that cannot treat them differently because of their gender. Adding the ERA to the constitution—and ONLY adding the ERA to the Constitution—will make this possible. Congress and the President must follow the direction of the necessary 38 states that voted to ratify the ERA and adopt it without further delay.” said Alyssa Milano, producer, advocate, actor, and ERA Coalition Board Member.“

The first proposed language for the Equal Rights Amendment was a century ago,” said Rosanna Arquette. “Today, women’s rights are under assault in state legislatures, in every draconian manner imaginable. It’s time for equal rights under the Constitution. Let’s make it happen.”The event was sponsored by Michael Stars, Johnny Walker, Variety Magazine, and WCPG.