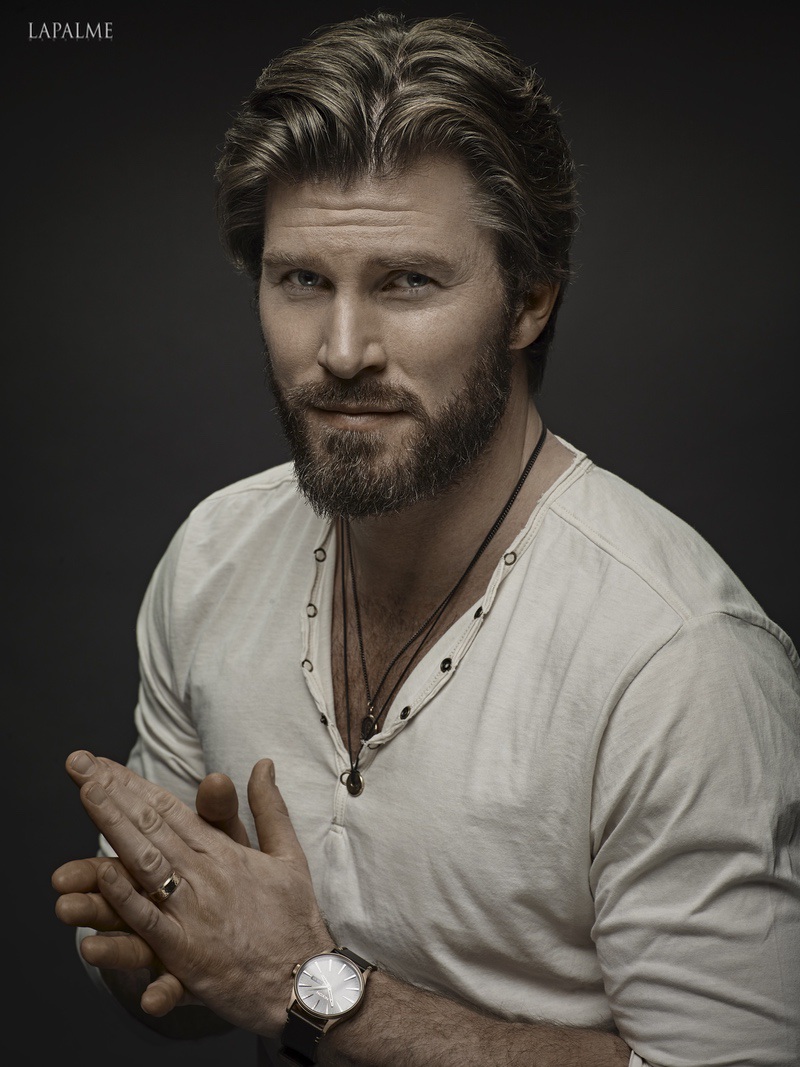 Christopher Russell doesn’t restrict himself to a single genre of film and TV. Instead, he graces us with a wide variety of projects such as his current horror series “Day of the Dead” on the Syfy Channel, and upcoming projects like “A Lot Like Christmas” premiering on GAC Family on December 5th, and “Reacher”, the highly anticipated action series based on the Lee Child books “Jack Reacher” which is set to release in the new year. He attributes his success in the entertainment industry to staying authentic to himself. His deep understanding of how to separate oneself from the “thinking mind” and become more present as the “conscious observer” has allowed him to maintain balance despite his demanding schedule

We sat down with Christopher Russell to chat about his current and upcoming roles, being a dad, his luxury starter pack, and how he stays grounded.

Tell the Lapalme Readers about yourself and your current project DAY OF THE DEAD?

I play Trey Bowman in SYFY channel’s new series DAY OF THE DEAD. The show is what they are calling an ‘ode’ to George A. Romero’s 1983 classic zombie horror film of the same title.  George Romero essentially is credited with having created the Zombie genre, with his first film, NIGHT OF THE LIVING DEAD. His style incorporated the tension and thrills one can expect with a horror movie, combined with a sharp wit and observations of society presented as social commentary within the narrative. Our current televised version takes all of these wonderful ideas the late Romero initiated and adds a level of humor and excitement to modernize the concept but also simultaneously pays homage to the original vision.

You also portray Joe Reacher in the upcoming REACHER series. What can you tell us about this project?

This series is based on the bestselling JACK REACHER novels by Lee Child and stars Alan Ritchson as Jack Reacher. The storyline is taken from Lee Child’s first book, THE KILLING FLOOR. I play the brother of Jack Reacher, Joe, who is a former military man now working as a ‘suit’ for a government agency. I can’t really say more than that, except that the show will be action-packed and thrilling.

You definitely hit a wide range of genres in your career because you also star in A LOT LIKE CHRISTMAS. Can you give the readers a little teaser of what they can expect from this sure-to-be holiday favourite?

A LOT LIKE CHRISTMAS is a holiday movie about a small-town family struggling to keep their Christmas tree farm in business as a big box franchise home and the garden center opens up down the road, offering ‘A wide selection at low, low, prices.’ Maggie Lawson plays Jessica, whose family owns the Christmas tree farm, and I play Clay, the regional marketing director for the big box store. We meet early on in the movie and really hit it off, not realizing we are in fact business competitors. Without giving anything away, what ensues afterward is tremendously fun and delightful, with all the feel-good and heartfelt moments one can hope for in a holiday movie.

What is your favorite holiday tradition?

Oh, they’re so many. I love decorating the tree with my family, all the classic Christmas hits playing as we sort through the ornaments, some of which date back to mine and my wife’s childhood, and watching the joy and excitement in our children’s faces. Christmas Eve is probably my all-time favorite. The anticipation of Santa Clause’s arrival, sitting by the fire, watching the original Grinch or Love Actually. I’m a big Christmas fan. I’d keep the tree up year-round if I had my way.

How do you stay true to yourself when auditioning or playing different characters? Do you feel obligated to be something you aren’t for casting directors/producers/etc.?

When auditioning, at first, I was constantly trying to think about how best to play the particular role in a way I imagined the casting and producers wanted it to be portrayed. But I learned through trial and error that’s a recipe for failure. If something feels forced or inauthentic, then it will ultimately fail because it’s not truthful. In the beginning of my career, I heard a lot of ‘Pro Tips’ which ultimately confused me and essentially backfired. Like, ‘You need to win them (casting/producers) over in the audition room, not just with your performance but your personality before and after the actual audition.’ Spending more time worrying about my social skills versus my actual reason for being there, the WORK, not the best approach.  A lot of us actors try to be everyone’s best friend when we walk in that audition room, which can most definitely read as disingenuous. Staying true to myself is showing up prepared to do the work to the best of my ability, be personable and collaborative, listen and be kind. Drop the ego at the door and have fun!

What is your favorite thing to do/ favorite place to go when you aren’t working to reset and ground yourself?

Running, hiking, and being near the ocean are all great for grounding. Spend more time with my wife and children, focusing on the family because, at the end of the day, family really is everything. So making sure I’m being present and doing my utmost to guide them as best I can through their daily lives.

What does luxury mean to you?

Anything I don’t ‘need’ but something that certainly makes life momentarily more pleasurable. New sheets with a high thread count on a freshly made king size bed, a perfectly tailored suit, a tasting menu prepared by a Michelin star chef, sleeping in without any responsibilities :), enjoying an expertly made Americano first thing in the morning sitting by the ocean with my wife, watching a movie with my family on an incredibly comfortable sofa….that’d be my starter pack 🙂

How would you define your style and what are some of your favorite brands?

I would describe my style as minimalist and functional. I don’t like logos, and I like clothes that fit well. I’ll be honest, I used to have a closet full of overpriced designer jeans and shirts, but since having kids,  these clothes just became incredibly impractical. I like anything well made and built to last. Thursday boot company is great, their designs are classic and they hold up over time. I need some stretch in my jeans if I want to be active with my kids at the park, so I like a little stretch in my jeans. So AG and 7 For All Mankind are good for that. I like the fit of Scotch and Soda’s denim shirts, and t-shirts, alternative apparel or Cuts clothing are simple and fit well.  I have a lot of sweaters/cardigans. Boots and thick sweaters are kind of my guilty pleasure. Ralph Lauren, Le31, are a couple of brands that make nice-fitting sweaters. Suits: Hugo Boss seems to work well for me.

What are you most looking forward to in 2022?

Another year of possibilities, another opportunity to watch my children grow as people, to grow alongside them, to enjoy what is beautiful in this world, and to continue moving forward on this wonderful journey called life 🙂

Where can readers stay up to date on all things Christopher Russell?