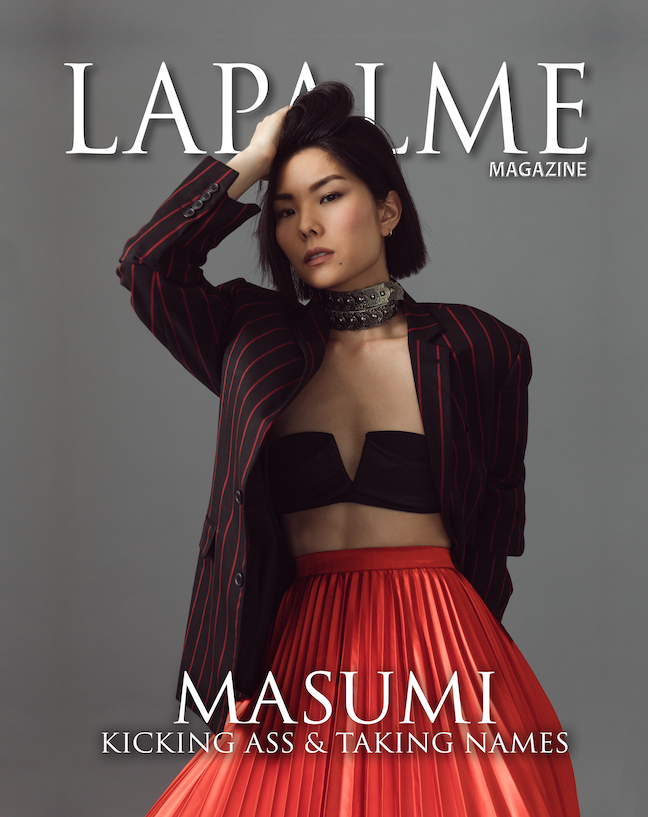 MASUMI is a child of both Japan and the US. Born in Palos Verdes, CA her formative years saw her move between Tokyo, New York, Washington DC, and finally Dallas – where she began her Singer/Song-writing career. Playing in local restaurants and cafes, she earned a devoted following, just her and her guitar.

She returned to Tokyo to enroll at the International Christian University. But the horrific devastating 2011 Earthquake changed her vision once again. Trapped in an underground cafe in Tokyo when the 9.0 magnitude tremor almost buried everyone alive. That day brought her back to herself, her dreams, and true clarity of mind and heart. Three months later, she returned to the US to enroll in the Los Angeles College of Music (now LACMA), determined to follow her passion once again: music and performing.

In 2016, word of her talent reached her home country: one of its most prestigious managers offered MASUMI the path and support to become a Japanese pop star. An offer few could refuse, however, she did refuse. Knowing the only way for her to find happiness and true success would be to stay true to her path. Creating her own brand of personal music, embodying authenticity and hope. Remaining in Los Angeles, she released a very personal single about her own journey of depression and resurrection: “Run Baby, Run,” in 2018, which was picked up by multiple official Spotify playlists. MASUMI is recording her next single “Cold Lips,” set to release in late 2021.

February 2019, MASUMI was introduced to an acting coach in Los Angeles. Looking to enrich her expression as an Artist, she jumped into acting training with enthusiasm. Just three months later, she was offered the title role in the Warner Brothers film, “Yakuza Princess” opposite Jonathan Rhys Meyers, and Tsuyoshi Ihara. The action thriller was filmed in Brazil, under the direction of Vicente Amorim. Being fluent in both English and Japanese, MASUMI was perfectly suited to play the titular lead.

A lot of things are in motion, but MASUMI’s goal remains the same: to inspire people to persevere, knowing life’s path is filled with challenges but staying steadfast to one extraordinary dream.

She chats about her breakout role in Yakuza Princess, music, and what’s next for her cover story with Lapalme Magazine.

You’re the lead in the new film YAKUZA PRINCESS take us through the process of landing the role and what the film means to you?
It all came together like a miracle. I had just started going to an Acting school that my husband, Kenny Leu, introduced me to. Three months into the school, I found out that Kenny’s manager was at a meeting with Yakuza Princess’s producer regarding another project and happened to have my self-tape. He showed my tape to Shelling, the producer, and she then asked for a meeting, so we met right away. I then turned in my audition tape for YP, and two weeks later I got the role!  I’m proud to tell a story about a badass female, powerful in her ability to overcome her fears. In a way, her story paralleled my life journey of being a struggling artist, and it felt like a “meant to be” to play her. I’m also proud to be a Japanese female to take the lead role, in an international film. We don’t see this too often, and I hope this is just the beginning!

You combine your love for music also in the film with ‘Run Baby, Run’ featured? How does it feel to have this moment on top of leading the film? Placing my original song in a movie has been one of the long lists of things I wanted to accomplish. So when it happened, I was overjoyed. It was a dream come true! There was a small challenge I had to face though since Akemi is not a singer. She’s drunk and sings the lyrics wrong in the scene, and my singer/composer ego wanted the song to be perfect as written! Lol. So there was that challenge I couldn’t foresee coming, but nonetheless, a happy struggle to have!

What was it like working opposite Jonathan Rhys Meyers? It was like having a big brother supporting and guiding me through the unknown of it all! He looked out for me and taught me techniques during our shoot together when I struggled to work with the camera. I hope I get to work with him again someday!

The Film features some iconic fight sequences. How did you prep for these? How involved in the choreography were you? For one month we trained in sword fighting, Martial Arts, and Kendo fight sequences. It was my first time doing martial arts and sword, but I was lucky to have my husband Kenny Leu with me, who is a long-time martial artist, to help me out with it all. I worked with Action coordinators who patiently taught me all the moves, and went home to practice more with Kenny, and prepared for the acting scenes. I ended up doing about 90% of my own stunts, and I’m very proud of it! Kenny and I also got to create a fight scene together, where it ends badly for his character. We found time during our off days to choreograph this, so we were so happy to know it made the final cut.

As you mentioned, your now-husband Kenny Leu appears in the film. Is there a cool story behind that? Share with us this journey. When I got the role for Akemi, we had to move quickly: pack for a 3-month stay, and leave to Brazil in 4 days. We canceled our wedding plans and got married at a civil ceremony instead.  At the time, Kenny was not involved with the movie. So he was going to come for 1 month to help me in Brazil. But when Vicente and Shelling saw Kenny’s martial arts skills and found out he was an Actor, they offered a role to him and wrote in a part for him! So the movie became like our Honeymoon gift.

Who are your inspirations in film? The powerful women who make me proud of all aspects of my female-ness: Charlize Theron, Jodie Foster, Momoi Kaori (Japanese Actress)

How has the pandemic changed you? Mentally, Spiritually, and emotionally? After I shot the movie in 2019, I was constantly on the go, and rarely had time to myself. So the pandemic gave me the space to digest all the new beginnings I was welcoming like becoming an actor, getting married, etc. It was also an important time to figure out what I needed to adjust, in order to sustain healthy body/mind/spirit alignment. Which is an invaluable foundation to have in order to thrive both in work and personal life. I’ve always strived to prioritize my mental health and conversations with myself. And the pandemic really solidified my values.

Music or acting? Or a happy blend of both? I feel blessed that I get to do it all. Music and Acting are my creative expressions, and I feel incredibly lucky that I have supporters in both!

What can we expect next? I am releasing a new song next month! Going back into the studio for more new tracks, so hope you stay tuned!

Where can Lapalme Readers follow you on Social Media?
I’m most active on Instagram, and you can find me @MASUMI.Music