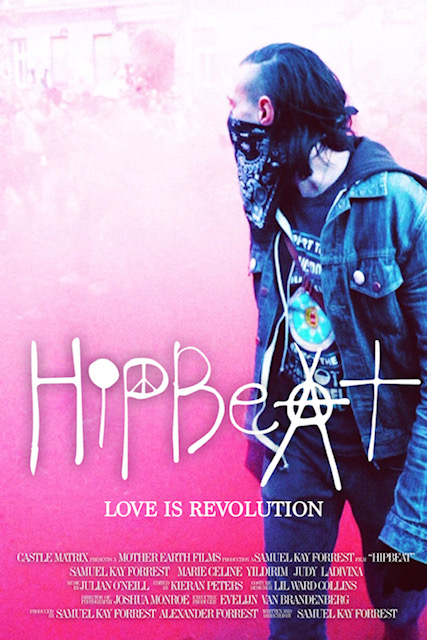 HipBeat: Love is Revolution is a rite of passage story that follows the lead character Angus aka Angy, a poet, street artist, and activist who realizes their gender identity is non-binary. They challenge the norms and rules in society when it comes to gender, politics, love, and relationships.

Angy protests against injustice and the political machine by day and explore their gender and sexuality by night in the Berlin rave community. Through Angy’s eyes, the film explores the freedom within the Berlin
nightlife, which is inclusive to all gender, sexuality, and ethnicity. On the dark dance floors of the rave community, people feel liberated to express themselves openly as they dance until the early hours of
the morning.
Angy is guided on their journey by the wisdom of a drag queen (Judy LaDivinia) and an old boyfriend from college.
They discover that love should not be limited by society’s rules. Through embracing their true identity they learn that self-love is an important step towards healing the past. In the LGBTQIAN community, they find their home.

The reason behind making this film was to explore the rules in society that don’t let people be themselves. There are a lot of places in the world that don’t accept people that are different.

Lapalme magazine sat down with the film’s creator and star Samuel Kay Forrest to discuss his personal inspiration, gender, and sexuality.

You have really come at your film head-on. Writer, director, actor, where did you find the inspiration to create this film?

I was inspired by family, friends, and my experience of spending time in Berlin. The city has a counterculture that I did not experience before. I thought if I could capture that inclusivity and love that people would find it inspiring. I had the script finished for a while but when I noticed the rise in far-right populism manifesting in different parts of the world I was compelled into action. I didn’t want my generation to be defined by hate, mendacity, and division that was being inflamed by the people in power. Through my experiences, I felt my generation was more united than ever in Berlin and around the world.

I think it might be unique to Berlin but I hope the same spirit and heartbeat is everywhere around the world. The demand for change and progress is relevant in many cities and communities. Berlin just is very radical in how they approach challenging the status quo.

Gender has become a discussion at the forefront of conversation in mainstream media. Do you think that is because storytellers like yourself have tackled the subject or do you think that social media has brought it to the attention of the general public?

Social media plays a big role in bringing awareness but it is through storytelling that we can deepen the narrative and create more understanding and empathy.
I think all forms of expression and content are important to further the conversation on gender. We all have a role to play in widening awareness and participating in the conversation. Gender and sexual fluidity are not new, it’s just starting to be liberated in the mainstream consciousness. By the way, a lot of Indigenous and ancient cultures have always known there were more than two genders. In some Native American cultures, they would recognize up to five.

In your films are you always exploring gender and sexuality?

Depends on the story and the characters. Some of my upcoming projects touch upon similar themes but other projects have a different focus.

How important is it for young filmmakers and storytellers to tell their personal stories?

I feel it is very important that young filmmakers, storytellers, and artists give an authentic voice to their generation. For me, the more personal, the more I feel connected to the story.

What are some of your next projects? What are the main goals in the stories you are trying to tell?

My main goal is to tell honest stories that bring marginalized people into view and have the audience empathize with them.  Currently, I have a couple of projects in pre-production and three short film touring festivals.  One is about artists following their dreams in LA and the other one is about refugees who get separated crossing the Mediterranean sea.