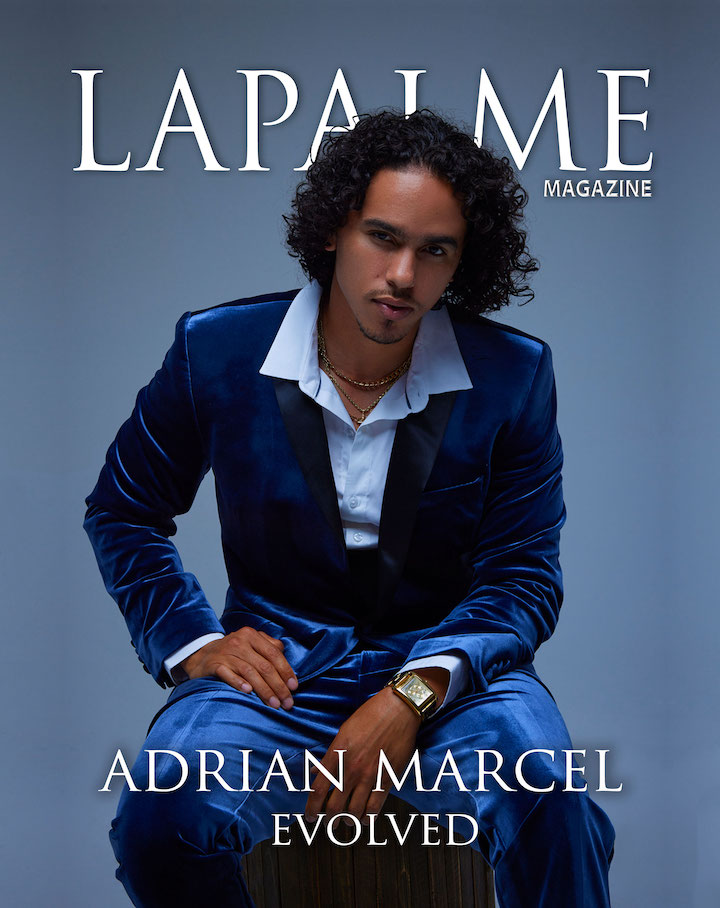 East Oakland native Adrian Marcel hit the billboard charts in 2014 with the anthem “2AM” featuring Sage the Gemini. The single sold over 1 million copies with the music video garnering over 80 million views on Youtube. Thus began an illustrious career bumping shoulders with such musical alumni as Kelly Rowland, Wale, The J.U.S.T.I.C.E. League, Genuine, The Dream, and Keisha Cole. Adrian’s Inaugural project was executive produced by Grammy Award winner Raphael Saadiq. Adrian’s upcoming EP MARCEL is already getting a lot of buzz and is on track to continue his record-breaking streak of successes.

Now that things are loosening up with covid, we had a chance to catch up with Adrian and ask him about music, acting, and his other projects.

Tell us about your new single “I Gotchu” and how it differentiates from the music you have done in the past? My New Single “I Gotchu” is to me, a Ghetto Love Story. It’s my take on masculine vulnerability. It’s the subconscious unconditional love we all want and hope for in reality. It’s not perfect contrary to what social media shows, and in fact the flaws and imperfections are what makes for that unique “Bonnie and Clyde” type bond. It represents protection, security, awareness, and reassurance. In my past music, I’ve played it safe, though every now and then throwing in hints of this even more raw true East Oakland side to myself. But never too much. I’ve always felt more of the need to prove my vocal ability but in this new music, I’ve been working on including “I Gotchu” there has been a new confidence surrounding me, and assuring me there is nothing to prove. Maybe it’s the Gemini in me making that switch from Adrian to Marcel but I go with what I feel now and not just what I feel the audience wants. They don’t know there is more to want until you start throwing these samples out like Costco., you feel me. The approach changed.

What can fans expect from your upcoming EP Marcel? In my upcoming EP “Marcel” my fans can expect growth and evolution. Expect the unexpected if you will. I’ve always been R&B to the bone. So much it’s tatted on me. But I never felt it was ok to go to some of the places I have creatively. However, now is the perfect time to expose just how deep my level of R&Bism goes. There is a side of me my audience hasn’t met yet. But I trust 100% they will f**k wit.

Tell us a little about your upbringing in the bay area? My childhood was filled with musical memories and timeless games. The baby of six, so some (siblings) would say I was spoiled. My mom always kept me in music cause she sensed it was something I had an interest in early. While my pops, who had a background in the entertainment field, was always making sure my head was grounded and on straight. I know now it was that team effort in preparing me for what would be my career. I ran the streets with my older brothers EVERY chance I got and got a front-row seat to what living in the Bay was all about young. I’ve lived in every part of the Bay there is to live. I’m able to adapt to any place or situation because of the diverse background I was raised in.

What are some of your favorite haunts in the bay area? In the Bay, my favorite haunts are little tucked off spots like CafeM, Grandlake Kitchen, Hippie Brews, Orbits Coffee, Black&Gold Barbershop, Tomatina’s, HelloStranger, TheNewParish, HalfTime, Mastros, Grails SF, Rubianos, 3UpHq, EliteFitness, and 25th St. Recordings just to name a couple. As you can see I love food the most.

Tell us about your parents and your pursuit of the arts? My parents are a pretty dope couple. They put the team in teammates. My father is a builder and entrepreneur, while my mother is an Architect. So they went hand in hand in creating a life for our family. Pops is a smooth cat, extremely respected, and has always been my idol, and my mom is probably one of the strongest and most intelligent women I know. I have to credit my morals and my spirit to them. Most of the game I learned about life was from watching them. How they move as a unit has always motivated me.

How did you keep yourself busy over the past year? I bought the property in Oakland at the end of 2019 and I’ve spent the last year with my parents designing and building a home for my family from the ground up. At the same time falling back in love with the creative process. I’ve found that everything I’ve been working on from this new music to this new house has been about restarting, recalibrating, and reconnecting with myself. All the steps it takes to build a home are no different from the steps it takes to build a brand. I’ve been more excited to be creative than I’ve ever been. I’ve fallen in love with watching things come together from nothing. On top of all that I’ve been living in these moments with my family. Using that time to get closer and heal things that may have been neglected because I was all over the place. This pandemic allowed me to find balance in all aspects of my life. Ya boy found a new groove. If I’m not working on the house, or spending that QT with my family, then I’m in the studio or I’m giving 100% to my craft and artistry.

What kind of hobbies, sports, etc grabs your attention? My hobbies consist of working out and exercising as much as possible. I find the gym and weights to be extremely therapeutic. It’s as if I’m lifting my stress away. I can think more clearly when I’m working out in silence and giving maximum effort to my body and mind. Huge shout out to Branden & Remy at EliteFitness for keeping me motivated and knowledgeable on my health. I like to meditate in the car as I’m driving. No music, no sound, just me and my manifestations. I’m still watching the road, so don’t try and @ me about it. lol. Movies are another love of mine. I can sit back and tune the world out on a bomb-ass movie or series. Probably because acting is something I love to do and want to get more into. It’s almost like study time for me.

What were some of your musical influences growing up? Some of my musical influences growing up were girls I was in relationships with or “Chillin” with. Those experiences gave me the content and inspiration to write songs and add to my artistry. Open mics were big for me as well. I would sneak in spots to watch ppl do their thing and see how to work crowds or how not to lol. After a while, I started throwing myself out there and learning to adapt to all types of situations and audiences. I watched OGs and players do their mac thang and would listen to their isms and watch their movements, which ultimately helped me to form the artist you see today. I’m all about player sh!t. That’s all from that East Oakland swag. Not to mention legends like Ginuwine, Usher, D’Angelo, Tank, Maxwell, J.Cole, Jay.Z, Nipsey Hussle, Jay Rock and so many more that inspired, motivated, and paved the way for artists like myself.

What are some of your musical influences now? My musical influences now are the people I’m around. I surround myself with some pretty dope creatives that push me to strive for a higher creativity. Sonny B. of CRSB is a crazy artist/songwriter/producer, Ryn Nicole is a phenomenal singer/songwriter/lyricist, Alex(Hightone) is one of the most passionate talented, and focused guitarist/musicians I’ve been blessed to work with, my business partner Schreen Gomez, who always keeps my mind from being stuck on just an artist and aware of my business sense. You can get caught up quickly trying to mix the two. 2Tall (producer), Max Perry (producer), KiddJupiter (producer), Sensho(producer), RioRoot (producer), and many more. You are only as dope as the people you surround yourself with, and my tribe is DOPE ASF!

Raphael Saadiq is an amazing entertainer, what was it like working with him? Working with Raphael has always been just as his legacy, amazing. I’ve gotten to watch him on and off the stage and be so motivated to step my game up. I’m a performing artist before anything else, so to be mentored by one of the best performing artists in the game is a blessing to say the least. More than anything else I’ve taken some timeless game from Ray on the industry, and on life. Taking the music seriously, never falling into the BS, what to watch for, how to maneuver around and keep respect, and to always be true to who you are and what you want. The time spent with Ray will last a lifetime in my career. I just hope I can inspire the next generation the same way through my legacy. Not to mention he’s still going strong! Longevity at its finest!

What growth did you see in yourself while under his tutelage The type of growth I saw was all within before it exfoliated to the surface. My bad habits weren’t so attractive anymore and without consciousness, I began to make changes to my character. I stopped wasting time on things and people that weren’t feeding my destiny. I started to give more time to the things that mattered the most. Mental, physical, emotional, and spiritual health became the driving force in my evolution. I take more accountability these days and expect just the same from the people around me. I’m more in tune with where I want to be and what steps I take to get there. Through all that came the exterior growth. I know now all aspects that have to do with Adrian Marcel. The way I look, the vibe and Ora I give off, the attitude I carry, and the influence I possess. I take myself more seriously than I ever have today, which only forces others and outsiders to do the same when dealing with me. I didn’t come to play, and I didn’t come to observe! S/O J.Cole.

Do you have any pre-show or pre-studio rituals that you enjoy? Very simple, I need bomb plants around if you feel me, some Jack Daniels Apple, Red wine, or some fire whiskey, I gotta be able to vibe out with my tribe for an hour or so before we startup. If it’s a show there is much prayer and meditation that has to happen before I hit the stage. I have to be left alone for a little bit so I can get my mind right and make the transition from lights off to lights on. I’m pretty simple and I believe when you got it you got it. I don’t try to make it more complex for the sake of being “artistic”, I’m good at what I do and I’m confident. That’s really all you need.

What else do you have coming up beyond music? I’ve been working on a couple of short films this year to be released soon. I’ve been open to many new things I wasn’t before such as modeling, real estate, and designing. I’m enjoying the process of flipping homes and property management. My new merch line is in the works, and my Non-Profit Organization is gearing to open at the end of 2022. More acting is a must for 2022 so stay tuned and tapped in!