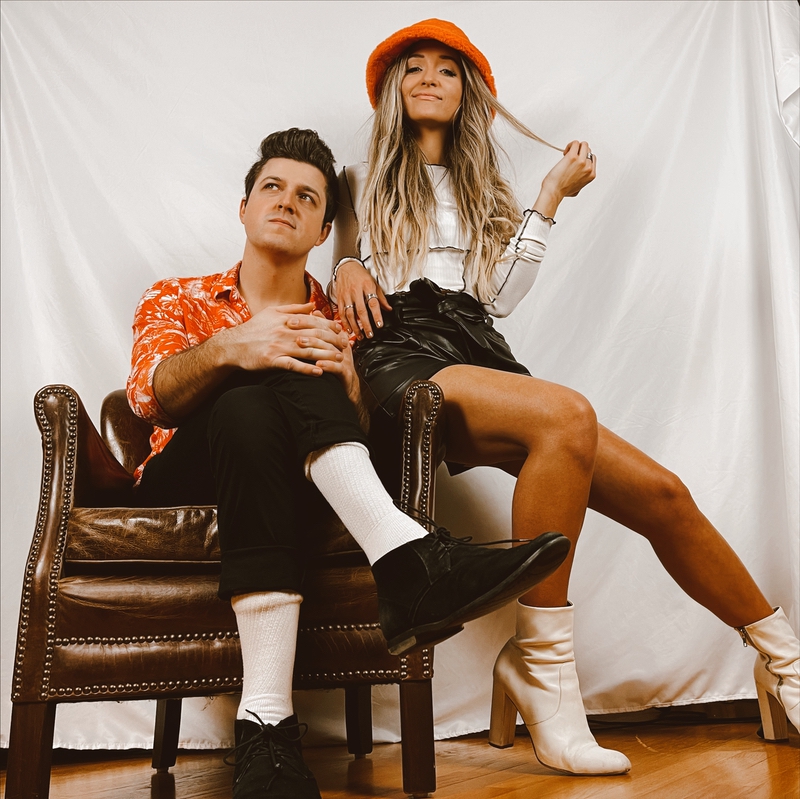 Fairview was first discovered by Tom Higgenson in 2009 when the band members were still in high school in Chicago, Tom’s hometown. The band introduced themselves and Tom stumbled upon their music online and fell in love with their sound. Soon after, Tom started writing music with them and ultimately became the first signing on the label. We reached out to find more about Matt and Lizzy.

What first got you into music? We’ve both loved music since as far back as we could remember. We were both those little kids who would memorize the songs our parents played in the car, and started taking piano lessons in grade school. So there was always music in our homes, but then writing songs started to be something we would do together in high school.

Who inspired you to make music? Matt grew up as a big fan of the Beatles, and Lizzy’s first concert was Shania Twain. I think overall the things that inspire us most are melodies and lyrics. We’ve also always been big Disney lovers, so two of our biggest inspirations there are Alan Menken and Howard Ashman, they wrote the soundtracks for Beauty and the Beast, Little Mermaid. The two of them had a way with melodies and lyrics that create pure magic. Like we mentioned earlier, melodies and lyrics are the most important part for us- it really does have that ability to create magic for the listener.  And I think that’s what we strive to do- create something that truly makes the listener feel.

How would you describe the music that you typically create? We like to describe it as dream pop- a combination of acoustic love songs meets catchy pop radio. I think the fact that we’re a couple in real life makes it that much better- getting to harmonize together and sing these love songs to each other is a dream, and there really aren’t many guy/girl duos in the pop world, so it feels very authentic to who we are.

What is your creative process like? One of us will start off with an idea, usually a verse and chorus, and then show it to the other, and we both work to finish it off. There isn’t really any one way it goes, we often just try to get ideas started by ourselves. But we love getting to bounce raw ideas off of each other. Songwriting can be tedious at times, so critiquing each other’s work keeps us on our game and makes us stronger writers for sure.

Who would you most like to collaborate with? Alan Menken for sure! We’re big Disney fans, and he’s the man behind hundreds of Disney hits. Beauty and the Beast, Colors of the Wind, Part of Your World- the guy is a genius. His melodies are amazing- and we would love to have his magical touch on one of our songs someday.

If you could go open a show for any artist who would it be? That is such a fun question. Lizzy is obsessed with Taylor Swift- so gotta choose her. We’ve seen her live like 6 times I think? (Big Swifties over here…) And her crowds are unmatched. The energy of her fanbase is incredible and to get to be on that stage opening for such a legend would be a dream come true.

What is one message you would give to your fans? Follow your heart, and believe in yourself.

What is the most useless talent you have? Matt’s really good at Flappy Bird… Is that even a talent? haha

Do you sing in the shower? What songs? You know what- not really! Matt doesn’t at all, but sometimes I will use time in the shower to try and write lyrics- so if I’m stuck on a line or a part of a song I’ll think on it in the shower, and often times I’ll actually think of an idea in there. So I’ll have to get out and make a quick voice memo while I’m soaking wet haha. But maybe it’s just the change of scenery that helps the creative process! It almost always works for me.

What would you be doing right now, if it wasn’t for your music career? Probably working for Disney in some way!

Where have you performed? What are your favorite venues?  We’ve been lucky enough to play some really cool venues across the country, touring with artists like Plain White Ts, Tyler Hilton, and Gaten Matarazzo from the show Stranger Things. Our favorite venue is probably House of Blues Chicago. We grew up going to concerts there, and whenever we get to play it ourselves, it’s really special.

How do you feel the Internet has impacted the music business? We’ve talked about this and definitely think it has pros and cons. I guess you could say that it’s made the music biz so much more saturated with artists, thousands and thousands of new songs being put out daily. But on the flip side it’s also easier than ever to just put something out and actually be able to “go viral”. We’ve had so much success on TikTok, engaging with a whole new audience of people we would have otherwise never been able to reach. However you look at it, the most important thing is that you’re keeping up with it, staying up to date on what’s new- or else you can’t get ahead. We look at it as an opportunity.

What is your favorite song to perform? Lizzy’s favorite is probably our single Loving You Hurts, we just put out the music video for this song! It’s upbeat, and such an easy chorus, so by the end of it we always have a crowd of people singing it along with us. There’s an energy that comes with the beat of that song that just lifts up the mood of the crowd, so I’d say that one! Matt’s favorite song to perform is our single Life In Your Years. It’s a really fun guitar riff, and a nice stripped-down moment in the set for the two of us.

What is the best advice you’ve been given? To keep going. There’s always going to be obstacles and things that go wrong but just remember the WHY. Why are you doing what you’re doing? Keep going and pushing forward, and soon enough you’ll find success.

If you could change anything about the industry, what would it be? All we really wish would change right now is that concerts could come back. Safety is so important, and so we know it’s probably months if not a year out until it will be safe enough for concerts to return, but dang we miss them!! Can’t wait till this pandemic is behind us so we can all hear some live music again.

What’s next for you? We’ve been spending a lot of this past year of quarantine writing, getting some new ideas going and we’re actually going to be in the studio next month to start recording a full-length album! We work with the really talented people at our label, Humans Were Here. Our songs are produced by their head engineer, Dan Monahan, and label founder, Tom Higgenson.