Home » NOLAN CARROLL – IT’S UP TO YOU 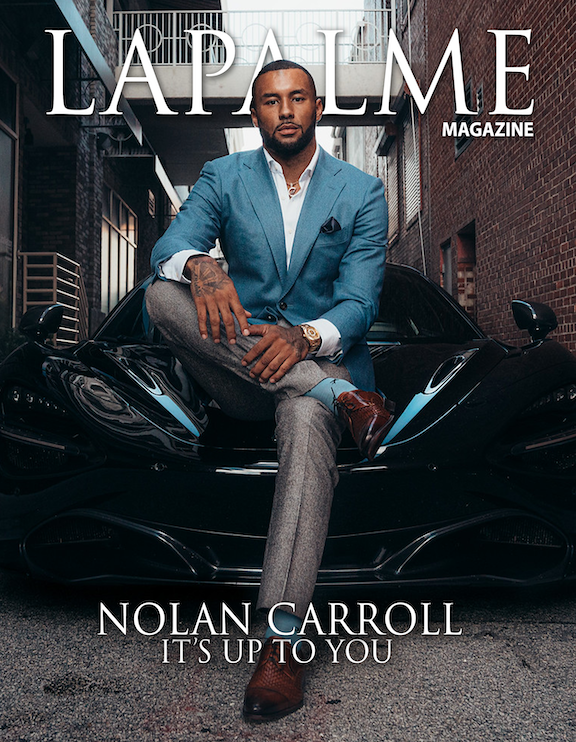 Most people are aware that Nolan Carroll was a top-tier NFL football player. He competed at the highest level nearly three times longer than the average NFL player. I’ll briefly summarize his accomplishments on the gridiron because they are a big part of who Carroll is today. However, he has fully transitioned to Entrepreneurship, and the NFL is in his rearview mirror.

Drafted in the fifth round by the Miami Dolphins, Carroll secured his spot through his tenacious work ethic, determination, and speed. He attributes that work ethic to his parents. Carroll’s mother, Jennifer, was a United States Navy Lieutenant Commander and the 18th Lieutenant Governor of Florida. His father, Nolan Sr. was a Senior Master Sergeant in the United States Air Force. As a result of their regimented parenting style, Carroll spent four seasons with the Dolphins, three seasons with the Philadelphia Eagles, and his final season with the Dallas Cowboys.

In 2017 Carroll inked a three year, 10 million dollar deal with the Cowboys, but after a severe concussion, he decided to hang up the cleats and switch gears. Carroll explained, “After that, I was just clouded. For some reason, I had concussions before and could get over them in a week or so. But this was lingering. It was affecting my mood and affecting my attitude. That’s when I got scared a little bit. I started thinking these head injuries I’ve had over the years are adding up now. This was the tipping point for me. I had to break away from football to figure out what I truly wanted to dive into. I think that day was the official first day of my actual life as Nolan Carroll, a complete person, not just Nolan Carroll as the football player.”

Entrepreneurship is a perfect fit for a person with his work ethic, drive, and tenacity. These traits have allowed Carroll to launch many successful businesses, but he was most excited to talk about Yolo Rum. “Yolo stands for You Only Live Once, and I think that is so prevalent in today’s world and society. It’s not just about the liquor; it’s about the meaning behind it. You only get one life to live. You might as well live the way you want to within reasonable means. But, don’t try to do anything crazy because you think you can.”

Carroll is from the Caribbean, and getting involved with Yolo Rum was a natural fit. Rum is a trendy drink in the Caribbean, and it has a storied history. Founded by Philip Guerin, Yolo holds 27 International Awards. It is gluten-free, with no added sugar and no artificial colors, flavors, or preservatives. Yolo’s formula was created by the world-renowned Don Pancho, known as “The Minister of Rum.” Carroll exclaimed, “I’m glad to be a part of this company. I’m glad to have people involved because it feels like a great team.” Carroll went as far as to liken the Yolo team to a championship-winning NFL franchise and individually named everyone involved.

The innate ability to switch gears is a part of Carroll’s success in football, business, and life. Car enthusiasts like manual transmissions because you can get more power from your engine and go faster when you control shifting gears. Throughout Carroll’s life, he has never been in automatic mode. He has always been in control of his destination, even when injuries tried to slow him down.

It’s not a coincidence that he likes fast cars. Carroll’s favorite is the Ferrari F12, but he has a car for every mood. “I love to get on the road and drive because it allows me to think. It allows me to see one way and go in that direction, knowing there’s a destination at the end. I joke around and say my Chevy Silverado is the car I love the most, but if I want to relax, I may get in the Cullinan and drive and think about what I need to do next on a project, or if I want to enjoy myself after shooting a podcast, or getting a deal done I’ll get in the 720 and let it loose. For me, it’s more of an emotional tie because I attribute my life to how the road is.”

Carroll also has a podcast called “Conversations with Carroll.” It is an introspective look at all of the people who helped Carroll become who he is today. It is unique and refreshing to listen to him give credit to people who instilled different things in him. The podcast is fresh, informative, and inspirational. On one of my favorite episodes, Carroll said, “You have to look at the road ahead. I always use this analogy, when you drive a car, your rearview mirror is small, and your windshield is big. What’s in front of you is bigger and better than what is behind you. Yeah, we can look back to see what the lessons are behind us and learn from it. But, if you try driving a car looking in the rearview mirror. It is impossible. You will crash. Just like if you are always looking at the past, you will miss the things in front of you that can be a blessing.”

The road ahead for Carroll is endless. At the young age of 33, he has accomplished more than most people could dream of, but he’s just getting started. He epitomizes what it takes to reinvent yourself and achieve the highest levels of success.

Catch up with Nolan at @carrollcity