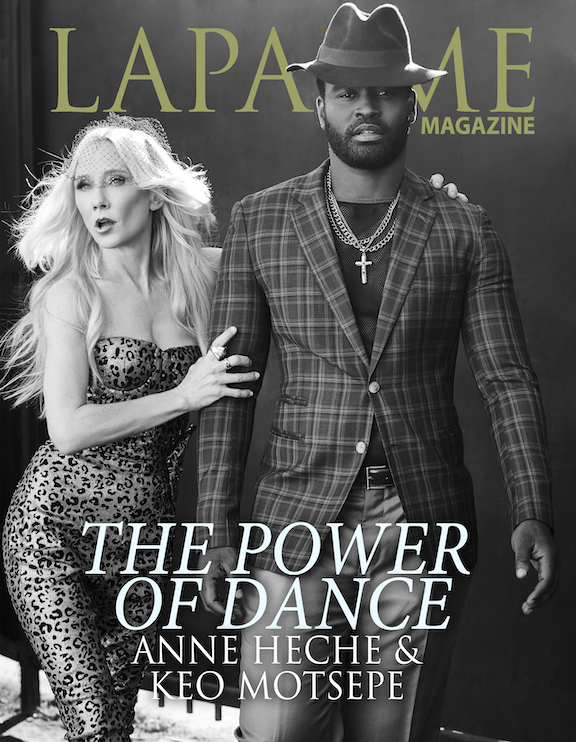 Hollywood’s inspirational leading lady, Anne Heche, and professional dancer, Keo Motsepe, are quite the dynamic duo. Initially meeting as dance partners during this season of Dancing with the Stars, they have quickly grown to be the best of friends. Despite only making it to week four of the competition, placing 13th overall, the two share bonds are way more robust than some finalists. “Anne doesn’t give up,” Motsepe reveals. “We would rehearse for four or five hours a day nonstop without taking a break. I would have a drink of water, and Anne is still on the floor practicing and Dancing!”

Heche, always on the look-out for opportunities to learn new crafts and seeking new challenges, has her thoughts on the experience, stating, “I just went full steam ahead! It was a fun adventure and a way to learn and grow.” She adds enthusiastically, “I’m super fortunate to have the opportunity to learn from somebody like Keo.” Keo returns the compliment, chiming in, “It was such an honor. Every dance we did told a story. She taught me some acting along the way, and it was awesome; it was an amazing experience.”

Although Heche and Motsepe are from two different walks of life, they couldn’t be more similar. Both have kind-hearted natures, a commitment to sheer hard work — and, perhaps most notably, their journeys as trailblazers in their careers in common.

The Volcano star’s status as a pioneer is doubtlessly solidified: she is not afraid to talk about her struggles in the entertainment industry due to her relationship with Ellen DeGeneres, which led to her subsequent blacklisting at the time, as well as her impelling fight for same-sex awareness, acceptance, and representation in Hollywood. “I remember when Anne told me her story,” Motsepe relays. “She’s a hero, and a hero for me is someone who motivates people, someone who inspires and uses their platform to change lives.”

What may be less known, and possibly less talked about, though, is the path being carved by Motsepe. “I was the first leading lady that stood up for same-sex rights, and Keo was the first African-American professional dancer on Dancing with the Stars, breaking down those barriers. It’s truly remarkable!” Heche exclaims. The DWTS pro adds, “It was always about opening that door; I wanted to be the first to do it because, at the end of the day, we can all dance.” His commitment as a positive role-model shines-through as he concludes, “I just want those young kids of whatever race to look at me and think ‘If Keo can do it, I can do it.”

Next up, the Six Days, Seven Nights lead is gearing up to launch her new podcast, Better Together with Anne and Heather, with lifelong friend Heather Duffy Boylston. “The idea behind it is that you don’t achieve success alone; there is always somebody in your life that makes you better or makes life more fun,” Heche says. Her book, Call Me Crazy, will soon be available on Audible, and she has another on the way.

As for Motsepe, he’s looking to take his talent to the next level. Motivated by his newly acquired acting skills from his work with Anne, he says, “I’m chasing my career and still opening more doors. I’m looking to get into some acting.” Motsepe elaborates, “My biggest goal would be to see my name on a Broadway show. Not just on the bill: I want The Lion King featuring Keo Motsepe, for example. THAT would be amazing.”