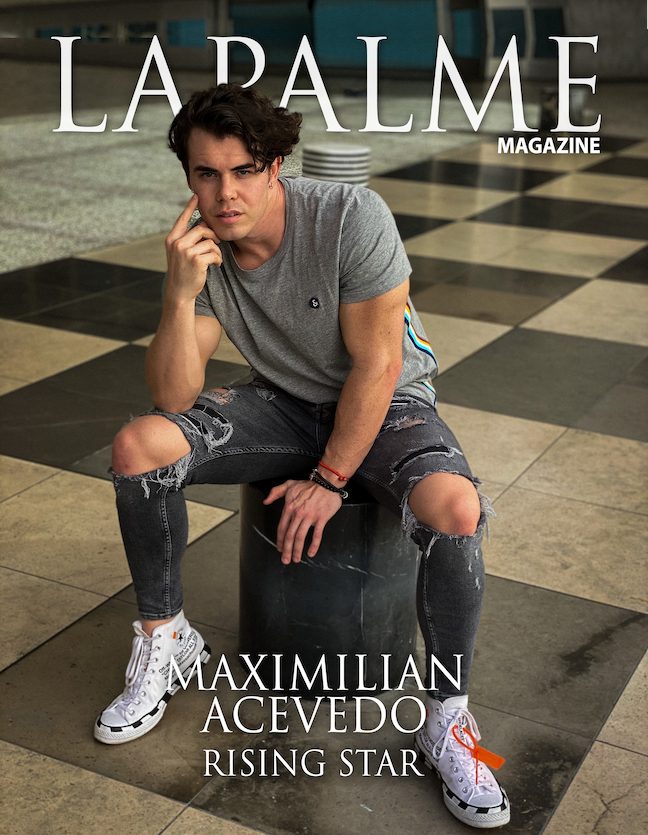 This year has been a year of uncertainty, but one thing that is for certain is actor Maximilian Acevedo’s rising star power has no limitations. The 22-year old got his big break when he was cast on Nickelodeon’s “Henry Danger.” This year he took his career to the next level when he co-starred in McG’s sequel to “The Babysitter: Killer Queen” released on September 10th on Netflix and instantly gained popularity amongst its fans as for the new addition to the cast, Acevedo.

Maximilian’s young career is growing fast as he handles each coming challenge with no fear.

He is signed with Thump/Universal on the music front and will be releasing his first single in early 2021. He is also a huge fitness enthusiast. As a young teen, the gym became Maximilian’s escape from a troubled childhood and helped him take control of his life. His determination, persistence, and strong work ethic – both in the gym, in-studio, and onset – is the key to his success.

Lapalme had a chance to catch up with the triple threat…

How did you get started in acting?

Acting was always in me. I always felt I was born to do it, but now turning it into a career was the challenge. I had to move back to Los Angeles and face some serious competition, but I was ready for it.

My agent got me the audition self-tape, which he helped me film at our agency in Beverly Hills. Two weeks went by, and we got the first callback for me to come in and meet the casting directors personally. Another week went by, and we received a second callback to meet with McG, and the rest is history.

What attracted you to the acting world, and what do you love so much about it?

I’ve always loved everything about film. The thrill of creating characters has always been a dream of mine. I love being able to inspire others.

You were on Nickelodeon’s Henry Danger, and now a comedy horror The Babysitter: Killer Queen; how were the experiences different?

Henry Danger was a fast-paced television series where everything must be completed in 5 days for each episode. Working on a feature film for Netflix gave us ten weeks to put the movie together. So the movie project gave me a chance to truly develop my own character, which was Jimmy.

In The Babysitter, you work alongside big names like Bella Thorne and Leslie Bibb; what was that experience like?

The experience working with these stars was incredible and an honor. All these well-established stars made it that much more fun to film the project, and it was a complete adventure for me.

What is your ultimate goal in acting? Where do you see yourself in 5 years?

My ultimate goal in acting is to become a Superhero for the world. It’s always been my #1 dream, which I’ve been training for my entire life. In 5 years, that’s where I’d like to see myself. I would love to have a diverse career like Mark Wahlberg and The Rock. They have both accomplished so much, and I intend to do the same.

What is your dream role to play?

At this particular moment in my career, booking any role, in general, is a dream come true. But I would love to play a superhero in a franchise film series.

If you could act alongside someone dead or alive, who would it be?

It would be so awesome to work with Mark Wahlberg, Leonardo DiCaprio, or Ryan Reynolds. Dead would be Marlon Brando. Also, Jennifer Lawrence or Madelyn Cline would be amazing females to work with as well.

Fitness is a significant part of your life; what gives you the drive?

Looking at my best and being physically healthy, with the ability to push my limits, gives me constant drive for fitness. It is a natural high that makes you feel great, with results you can see.

How has fitness changed/added to your life?

Fitness gave me an edge to want to compete and to become an overall better person. It displays physical hard work for what you can accomplish when you set your mind to something. I use this and apply it to every other aspect of my life.

My first song will be coming out early next year under Thump / Universal Music. I feel very blessed to be in this position because I know how many people would give anything to make it happen and work in this industry. If I can give anyone a piece of advice… stay consistent with whatever it is you’re pursuing and don’t stop doing it. Remember, you can always get better! I’m also participating in a St Judes campaign called “We Won’t Stop.” It applies to all our lives, but to St Judes, it means we won’t stop until we find a cure to save children from cancer!