Known for impersonating some of hip-hop’s biggest stars like Jay-Z, Drake, and Russell Simmons, Affion Crockett continues to push the envelope as he gears up for Mirror II Society debut. Affion’s career was influenced by his father’s military background and how he could connect with others as the constant new kid. As a child, he grew up in Germany, moving 14 times and had to find a way to fit in 14 times. Using voice impersonations as an ice breaker, Affion found a common ground among cultures and excelled. After graduating from FSU, Affion made his television debut on “HBO’s DEF Comedy Jam” and shortly after starred on an MTV Improv comedy show called “Nick Cannon Presents: Wild N Out.”

“With a military background, my father knows safety and security. When I told him I wanted to be a comedian and go into this unsafe, no promises field, he freaked out. Thankfully when I got booked at DEF Comedy Jam, I was able to show him that I knew what I was talking about.”

“I almost get offended when I start hearing people say ‘That’s not going to translate with that audience.” I’ve been doing comedy for years, and I also am an army brat who grew up in Germany, so I know different cultures; I’ve lived in them and experienced them. We all laugh at the same stuff, so I don’t draw lines with my comedy and I don’t separate.”

After watching “In Living Color,” Affion studied the Wayans family and decided to audition for a pilot. By the time he was in character, he was in front of Shawn and Marlon Wayans. “They were laughing so hard; Shawn threw a bottle at me so I could stop making them laugh. I knew the rhythm, and I knew what they were looking for comedically. It’s been a family affair ever since.”

Being a very cerebral guy, Affion’s jokes begin with himself. Although he looks to experience and people-watches to collect inspiration for his jokes, Affion believes in all comes back to him. “To me, if you don’t have the truth there, what are you making fun of? The truth transcends any race or culture. We’ve all experienced things the same way, and we all feel essentially the same way about it. When you get down to the human element, that’s where the comedy lies.”

2020 has brought many ups and downs for our country. From the election to the pandemic, we’ve been on edge all year, and they do say laughter is the best medicine. Using comedy as a remedy, tune into Kevin Hart’s new comedy platform Laugh Out Loud, where Affion is set to be the first hour-long stand-up special released; “Mirror II Society.” The special is set to release on November 13 on the LOL network streaming and audio channels. “Mirror II Society” will be Affion’s first long-form stand-up and will showcase hilarious experiences from growing up as a dancer to politics and relationships.

Tune into Mirror II Society on November 13, and in the meantime, stay up to date with Affion at @affioncrockett and catch an episode of Club BodyRoll on Twitch TV! 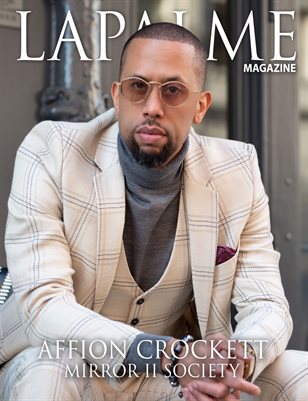 Known for impersonating some of hip-hop’s biggest stars like Jay-Z, Drake and Russell Simmons, Affion Crockett continues to push the envelope as he gears up for Mirror II Society debut.