Arielle Kebbel is one of the most sought-after talents in Hollywood. She has starred in the most popular television shows throughout her career. Arielle played the lead character Amelia Sachs in the NBC series Lincoln Rhyme: Hunt for the Bone Collector. Arielle also starred in HBO’s hit series “Ballers,” opposite Dwayne “The Rock” Johnson. I could fill the entire article with her resume alone. Still, I’d be remiss if I didn’t include fan favorites “The Vampire Diaries,” “UnREAL,” “Midnight, Texas,” “Grand Hotel,” and “Gilmore Girls”.

Unsurprisingly, Arielle was tapped to join FOX’s #1 show, 9-1-1. The hit show is already in its 5th season. It has a stellar cast, including Angela Bassett, Peter Krause, Oliver Stark, and Aisha Hinds. However, the new energy that Arielle has brought to the show is undeniable. Arielle said, “the cast is amazing. My first day was this big scene where I kissed Buck, played by Oliver Stark. “Everyone was just so supportive. What they have is like a family, and they invited me in”. Arielle humbly credits the established cast with her easy segway into the show. Still, she is a consummate professional who can navigate any set. Although she had never put on fire fighting gear and was afraid during some stunts, you would never be able to tell. On-screen, Arielle fully embodies the badass character of Lucy Donato. She credits that to Oliver. “He really helped me get acclimated on set. He showed me how to put on my gear and operate my helmet light and all of those little things”.

The show is one of the biggest on television because of the great cast and writers, but fire/ rescue is also fast-paced and daring. The cast members are encouraged to do their stunts, bringing an extra level of realism. Arielle explained, “during the finale where Lucy’s repelling down a cliff with cap, that was actually Peter and me (shout out to my stunt double Jessie Graff, who also did the stunt and is an incredible human being).” It is so nice to have Shauna Duggins as our stunt coordinator because she made me feel safe and secure. I had never had a female stunt coordinator before. She took the time to remind me of things like breathing (even during a stunt) that helped me push through the fear and the adrenaline so I could focus on the job.

There’s a strength and warmness to Shauna that I really respect. Both Peter and Oliver were also incredibly helpful and supportive with the stunt work, checking in to make sure I felt safe, which I really appreciated.”

As the world begins to return to some sense of normalcy, Arielle plans to spend her summer outside with her animals. She recently moved back to New York and is anxious to be with her horses and farm animals. Arielle said, “I was a horse person since I was born. I always wanted to be around them and ride them.” She is also looking forward to visiting the city to see friends and is open to summer travel suggestions. At this moment in the interview, Arielle’s dog Pepper created the perfect segway into Arielle’s love for animals. Initially, I thought my dog may interrupt the discussion, which Arielle totally understood. Still, when Pepper entered the Zoom, I had to enquire about her. Arielle told me, “I was in LA doing press for a show and was asked to go outside to help support the Pasadena Humane Society, and their adopt don’t shop motto. I saw Pepper, and we were instant magnets to one another. I Couldn’t put her down. She wrapped her tiny paws around my wrist, and that was that. Meanwhile, my publicist was all, “Arielle. You have a panel inside. Arielle, Arielle the panel. “I ran inside and shouted, “don’t let anyone adopt her; I signed my name! “I will always remember my publicist and manager helping carry all of Peppers’s things to my hotel room and asking me if I knew what I just did and if I was ready to fly home with a puppy. It was so funny and so perfect. Welcome to the fam, Pepper. We got this.”

If you can’t tell already, Arielle absolutely LOVES animals, which is why she is a board member of Skydog Ranch. Skydog Ranch is a non-profit wild mustang and burro rescue with sanctuary locations near Bend, Oregon, and Malibu, California. They provide forever homes for wild mustangs and burros who have ended up at kill pens, auctions, or unloving homes where they have often been starved and neglected. When I asked Arielle how she got involved with Skydog Ranch, her face lit up, and she responded, “I’ve always had a strong connection to horses. I started riding when I was five and had horses on the brain. I did a book report in school on Misty of Chincoteague, and my passion for wild horses has only grown. Skydog Ranch rescues horses from slaughter and gives them a forever home to run wild and free with their chosen herd. I’d followed their work for a while, and when the fires happened in Malibu a few years ago, I felt it was time to help however I could. I started coming to the barn and sponsored a majestic white rescue unicorn named Swayze. I actually have pictures of him all over my house, thanks to Julie Testwuide (a great photographer and friend who photographs wild horses). Many people don’t know this, but wild Horses are round up and held in kill pins for auction or slaughter. We’re working hard to pass the SAFE ACT.” The SAFE ACT is a bill prohibiting the transporting, receiving, possessing, purchasing, selling, or donation by a person of an equine (e.g., horse) that the person has reason to believe will be slaughtered for human consumption. This would permanently shut down the slaughter pipeline for horses and force people finally to take responsibility for their horses and burros.”

“If you want to help, please call your US House Representative and urge them to SPONSOR and SUPPORT the SAFE Act, HR 3355/S 2732. Call 202 224-3121 and ask for your rep’s office. Say, “My name is ________, I am a constituent of Representative _________ . Please protect American equines by sponsoring and supporting the Save America’s Forgotten Equines (SAFE) Act, HR 3355.” And you can head to the Skydog Ranch website or follow them on Instagram for more updates or learn how to sponsor a horse or burrow. Supporting Skydog is one of the things I’m most proud of. I’m in awe of founder Clare Staples and what she’s done to give these animals a peaceful forever home.”

Arielle has an incredible platform and millions of adoring fans. She focuses her energy on the things that she is very passionate about. Arielle is also an ATX Television Festival Advisory Board Member. ATX celebrates the television medium: looking back at its history, where it is now, and where it’s headed. Arielle explains, “tv is a special community, and during these hard times, it’s important to remember how much art inspires us and the connection keeps us going. We say ATX is a tv camp for grown-ups, and I love going to camp every June with these folks and am grateful to sit on the board with such accomplished men and women in this industry.” Arielle uses her platform for a myriad of issues outside of the ones mentioned here, which led me to ask her what it was like to use her platform to amplify social issues. She profoundly answered, “I can’t look at it that way because it can be overwhelming, but I try to focus on the things that I am passionate about and know I can do my part to help. I hope that if we all do that, as a community, we can do a lot of good together.” 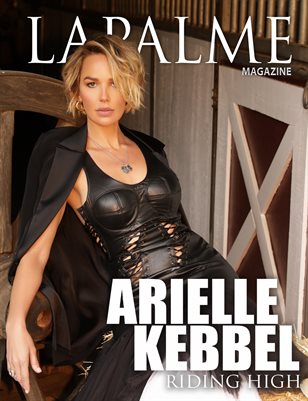