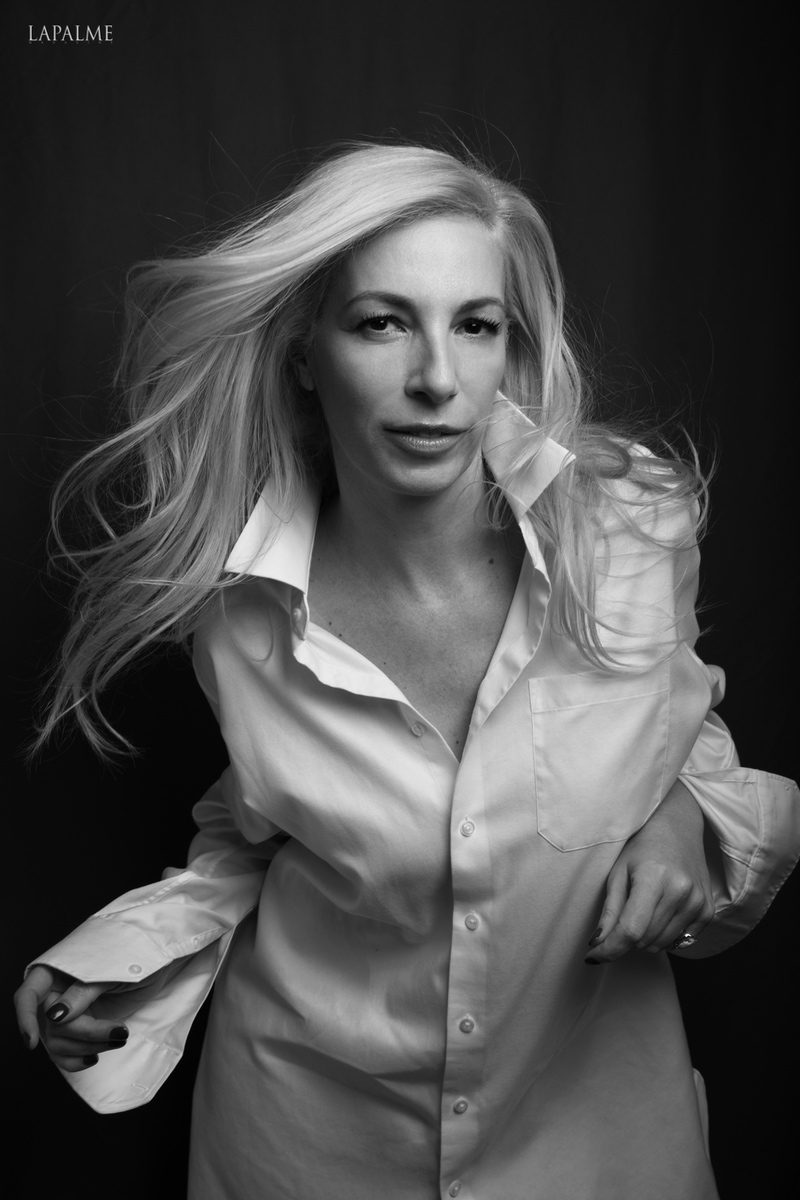 As one who seemed destined for the spotlight—she literally took her first steps at a film studio in Rome—multi-hyphenate actress, producer, director, and writer, Livia De Paolis has undoubtedly found her mark.  Comprised of a no-nonsense demeanor and a passion for creativity, she is certainly proving herself a force to be reckoned with in Hollywood.  Her most recent film The Lost Girls, in which she stars, directed, and wrote the screenplay, is evidence of the great success to come.  It’s an arthouse feminist drama that tells a very different Peter Pan story, chronicling Wendy Darling and her female descendants.   We sat down with Livia where she gushed all about the film, her go-to style, and her vision for more opportunities when it comes to female directors in Hollywood.

You were born in Rome and literally took your first steps at a film studio… how did you take the leap into acting?  Do you feel like it was something you fell into due to your upbringing/environment?

Growing up in that environment I always thought that was what I wanted to do and that I would eventually fall into it, but actually, the case was pretty much the opposite as my family was completely adverse to the idea of me becoming an actress;  they not only discouraged me but also deliberately interfered. I remember once I asked my aunt for an introduction with a producer and her introduction was literally: “This is my niece Livia, she wants to be an actress, can you please help me convince her this is really just not for her?” I cannot emphasize enough how demoralizing that was, but then again if I’d had it very easy in Italy I probably would not have moved to New York so — I’m happy for the way things ended up working out.

What would you describe as your favorite role that you’ve played so far, and why?

Definitely Wendy. My writing process has been very intertwined with the character development in the sense that I would literally workshop some scenes from the script in Susan Batson’s acting classes and then I would go back and rewrite the script with the new knowledge I had discovered experientially. And then I would take the new script and rehearse it and do some more work on the character and so on and so forth. Creatively this has been a very rewarding process for me and for this reason I have no doubt that Wendy will always have a special place in my heart.

You wrote, directed, and star in the upcoming feature film The Lost Girls, an arthouse feminist drama that tells a different Peter Pan story… what can you tell us about the film without giving away any spoilers?

In THE LOST GIRLS four generations of Darling women struggle with returning to reality following their adventures with Peter Pan in Neverland. Like her grandmother (Redgrave) and her mother Jane (Richardson) before her, Wendy (that’d be me) must break Pan’s spell and uncover what’s real in a world full of fantasy.

Far from being a family movie or the young adults tale that could easily come to mind when thinking of the mainstream version of Peter Pan,  The Lost Girls could best be described as an arthouse hyper-realistic take on the life of four generations of Darling women who seem to be affected by a condition scientists have recently identified as “hyperphantasia, “ or the ability to have extreme or far above average mental sensory imagery occurring both when imagining things, and when recreating memories stored in the brain.

When thinking of the magical adventures of Peter Pan in Neverland it is very easy to forget how Peter was abandoned in Kensington Gardens in London: he was left behind by his parents and that is the destiny he shares with all of The Lost Boys and with our young Wendy, whose mother Jane mysteriously disappeared right after giving birth, and she yet has to return.  The core trauma of the movie is abandonment, however tonally the themes are approached with a sense of light-heartedness.

By looking at four generations of Darlings and how they evolve through different times The Lost Girls ultimately speaks to women of all ages as it contemplates the contradictory human yearning for freedom and safety in a moving and upbeat story of motherhood, re-enchantment, and love.

Do you think the messaging of this film is even more pertinent in today’s culture?

I read the book in 2003 and thought it was very pertinent back then, but I do think that today’s culture is making more space for these types of stories and for these types of women –  and that is a very good thing. I’m delighted that Simon and Schuster are reprinting the book in conjunction with the release of the film.

When it comes to women in Hollywood do you feel there are now more opportunities? How has the industry changed from your perspective?

Compared to when I made my first feature 10 years ago there are definitely more opportunities for women in Hollywood and feminism has become way more popular than it was  10 years ago. It’s kind of shocking to think that until just a few years ago a lot of women and girls were still hesitant in identifying themselves as feminists — it just was not considered to be cool as it is now. I am obviously delighted for the new opportunities and for the new voices that are emerging in this space. I think it is pretty much essential, not just for women, but for our entire society and culture to include multiple points of view and different voices. How are we supposed to grow and evolve if we just continue to tell ourselves the same old story of the hero trying to overcome an obstacle? Luckily the shift has occurred and I’m hopeful that it will continue to expand so that eventually we won’t need to think of ourselves as female filmmakers, but just as filmmakers because we’ll be operating in an industry that will be made up of  50% by female filmmakers and 50% by male filmmakers. We are obviously not there yet but I am optimistic and I actually believe the change is inevitable.

Let’s shift to fashion! How would you describe your go-to style? What are some of your favorite brands?

Most of my days I’m in sweat pants and a hoodie and for that, I have a soft spot for Aviator Nation. I mostly spend time alone or with my dog and my boyfriend and after the lockdown, that type of very low key lifestyle has become pretty much the norm for me – but I do enjoy dressing up a bit in the evening or when I do go for meetings and I’m always surprised at how many nice outfits I can actually pull out of my closet. I think over the years I’ve become pretty good at buying less frequently but really getting pieces that I love and that I love to wear over and over again. For casual/low key/cool I like Rag & Bone, Zadig & Voltaire, Isabel Marant and I also love Stella McCartney. For more dressy pieces I love Alberta Ferretti and Chloe. But I also very much enjoy getting something from some small boutique as that typically ends up being more unique than most things that are made by popular brands.

Any tips and tricks for getting red carpet ready? Any traditions that you like to uphold?

To me the number one thing that will help me look good and most importantly feel that I’m on top of my game is sleep — lots and lots of sleep. So if I’m going to a special event or if I know I’m going to be photographed I try to lay low and sleep a lot in the previous days so that I am well-rested. The good old tricks – lots of water and rest. And then of course a very good blow dry. For make-up, I’ve come to very much appreciate lashes extensions as mascara inevitably turns messy on me. I also always try to have a pair of flip-flops or comfy shoes handy so that at some point I can sneak off those heels. Lastly, I think a big smile might just be the best trick of all.

What’s next for you? Any other projects on the horizon?

I’m playing a part in a movie directed by Catherine Hardwicke and starring Toni Collette which will be filming in Italy next month. I admire both Catherine and Toni immensely, in fact, they might very well be two of my very favorite women in the industry so it is an absolute dream come true to be able to work with them both. Still pinching myself for the opportunity. I am also attached as a director to a number of projects that are in development but as of today, there’s no way to tell which one will go first. Lastly, I am adapting a novel by Mylene Dressler titled “The Last To See Me,” which is my own project, and I literally just started with the outline but I am already very much into it.

The Lost Girls releases worldwide and streaming on June 17th.  To keep up with Livia follow her on IG @liviadepaolis