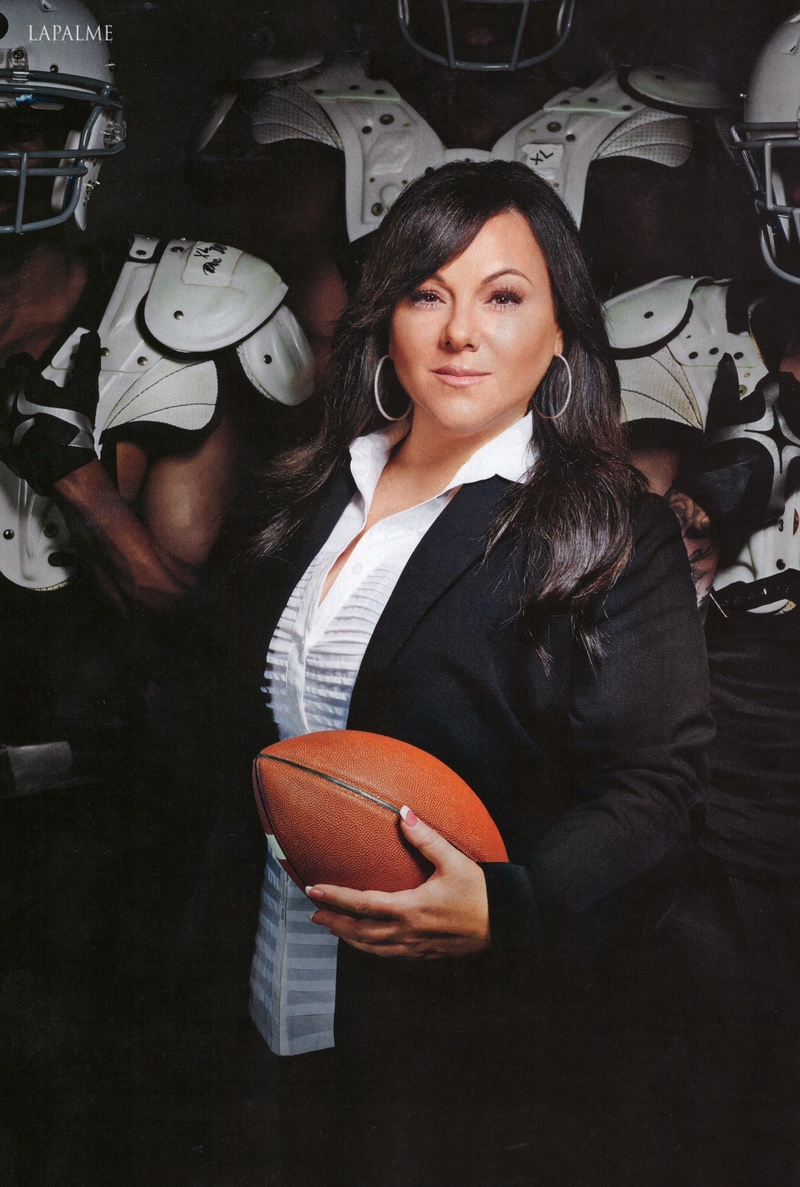 For the past 25 years, the world of crisis management in the sports industry has rested on the shoulders of one woman – Denise White. Known as the “Olivia Pope of the sports world,” she has built a reputation predicated on truth, honesty, and integrity which also serves her clients as she guides them through some of the most challenging times of their lives. As the saying goes, to understand the present or get to the future you must first revisit the past. So let’s rewind. Before Denise became “The Fixer,” she was a young girl experiencing her own crisis. Due to the unfortunate nature of her mom’s battle with mental illness, Denise, along with her twin sister, was placed in the foster care system and separated. Because the legal system was different at that time, relatives had little sway in deciding who children could live with. Her grandmother won custody of her but not her sister and, as a result, Denise was raised as an only child. As she explains, “my grandmother was able to get me but not my sister because she was in her 50s at the time and they felt she was too old to take care of one child, let alone two by herself with no husband.” Discussing life growing up with her grandmother, Denise credits her for the fight, drive, and ambition she has today that has led to her successful career. “My grandmother was incredibly independent. She always told me while I was growing up to make sure I could take care of myself and was very loving and supportive of anything I did regardless of what it was. She taught me morals and the importance of hard work and to always ask if you can do more, because people will remember you that way, and to take a lot of pride in what you do. I always say that she saved my life because she did.” It is important to note that although Denise did not grow up with her sister, they maintained their relationship and are a part of each other’s lives today.

Flash forward to the present, White is now the CEO and Founder of EAG Sports Management. Founded in 1997, EAG is a public relations and marketing firm that provides services to high-profile professional athletes in the areas of public relations, brand marketing, personal and business needs, publicity, and of course, crisis management. Speaking to this particular service within her company, I asked Denise what the deciding factor was to add this division to her list of professional services. Succinctly, she says, “I started to see a lot of athletes getting into trouble.” Starting with small, matters such as drunk driving or positive PED (Performance Enhancing Drug) tests soon escalated, ranging from extortion to false accusations and all that lies in between. She goes on to further explain, “I started with a small case. One of our athletes had been accused of touching a woman in a strip club inappropriately. That case was where I realized that these guys need protection and support and someone to come to their rescue when these things happen. Once we started doing more and more of it and people started noticing, we became known for crisis management. We started getting more phone calls from athletes who weren’t our initial day-to-day clients. That’s how it all started.”

Discussing her crisis management process, White notes that because no two crises are the same, her approach may shift depending on the circumstances as everything is on a case-by-case basis. “My approach is always to assess the situation. Some extreme cases involve domestic violence and then there are others where a client may be suffering from a mental health issue that caused their behavioral problems.” She shares that it is those cases that she enjoys working on the most as she can personally relate to the matter due to her experiences with her mom. Denise does, however, have her limits when it comes to cases that involve children or animals. In an honest moment, she admits that there have been cases she has had to turn down because she wasn’t going to be able to fix it, stating, “the more you do this type of work, the more you realize what’s fixable and what’s not.” Nevertheless, helping an athlete come back from a crisis and restore his name and reputation and then go on to have a successful career once they’ve retired from sports are the moments she cherishes the most. To her, “that’s a win.”

As with any career, you can love it some days and not as much on other days. For Denise, those moments come when she faces her more challenging crises which usually come from the athletes themselves. Athletes can have a reputation for being stubborn and hardheaded which can be brought to the surface when dealing with sensitive matters such as a potentially career-threatening crisis. Sharing her moments of such a matter, she expounds that when dealing with crisis management cases, you first have to “get your client to believe that you have the skills to help fix their problem.” Cases that involve what she refers to as “repeat offenders” are where she is the most challenged. Athletes who continue to get into trouble only exacerbate the issue regardless of her best effort to try and fix their problem. Even with a tight-knit strategy in place, if behaviors are repeated and not corrected, even the media will soon lose interest as an athlete’s apologies or calls for forgiveness will begin to fall on deaf ears. But patience is her strong suit and, although moments dealing with an unruly athlete can prove stressful, Denise still finds the silver lining. “Yes, they can be stubborn. But I find that when you’re very explanatory and you map out the strategy so that they see the end result, they feel a little more secure knowing that you’ll take care of it.”

Of course, I couldn’t continue our conversation without asking her to apply her crisis management skills to real-world cases of today. Most notably, the case involving Aaron Rodgers, quarterback of the Green Bay Packers. Here’s a quick recap for you – Rodgers, who told reporters he had been “immunized” against the COVID-19 virus in August 2021, tested positive in November 2021. Rodgers soon found himself in a media storm with sports commentators, reporters, and even some fans questioning if he had lied to the public about his vaccination status. In addition to losing an endorsement deal with Prevea Health, Rodgers was fined $14,650 for not following COVID protocols, and his team was fined $300,000 for not disciplining him or reporting his violations of those protocols. I asked Denise had Rodgers been her client, how would she have advised him through this matter. “It’s pretty simple. I would have told him to tell the truth. I have a client on a different team who is a staunch anti-vaxxer. He’s very open and honest about it. Nobody questions his reliability on whether or not he’s telling the truth. And I don’t know why Aaron Rodgers, who is a standout quarterback and has been in this league for years, would not just be open and honest about it with the media.” She adds, “I would’ve told him that yes, you made a mistake but, what’s great about making mistakes is that you can right that mistake, you can be a man, admit to that mistake, and fix it. You only dig your hole deeper when you lie.” Simply put, had she represented Rodgers, his crisis would have ended a lot sooner than it started following her simple yet effective approach of accountability and responsibility: “I lied. I was afraid of the backlash if people knew I wasn’t vaccinated. I apologize. I will work hard to make sure that I do better the next time.”

In fairness, she also states that the NFL has done a disservice to the players by making them share their vaccination status with the media. “I think that should be the business of the teams and the league.”

Phew! How’s that for diving deep? As if this wasn’t impressive enough, Denise’s career has been so inspiring that it is entering the world of entertainment. Originally set as a film through Fox2000, the project will now air as a television series. Even though she was mum on the details about which service will stream the series, she did share that “it’s a large streaming service” and she is excited about the project and humbled that Hollywood took an interest in bringing her story to television screens across the country. Denise will also serve as an executive producer on the show.

I could have continued my conversation with White for hours as she is a personable individual and a great conversationalist. In ending our interview, I wanted to focus on her position as a woman working in a predominantly male industry with a majority of male clients. Despite her 25 years in the business, I asked Denise if she felt she had earned the respect of her peers or if she feels she’s still working to earn it. “Sometimes I feel like I’m working to earn it because there are some men in the industry with antiquated thinking who feel like nothing has changed for them. Realistically I think it took a while to get that respect. I’ve been doing this for 25 years but it’s interesting how people view you when they need you. I think as a woman, you’re always fighting because it’s still a male-dominated industry in sports, but people start to give you more respect when they need you.”

Denise White is a pioneer in the world of sports management. Her career serves as the blueprint for how to be successful as a woman in a world dominated by men. Not only did she start her own company, but she purposely decided the majority of the leadership roles within the company would be held by women to ensure equal opportunities and a fair shot in the industry. She says that her key to success has been “not taking no for an answer.” Her advice to women who want to enter the world of sports management is to take notes, soak in all the information you can absorb, and most importantly, learn from everything and everyone, as that is how you move up in the industry. Denise believes that there is still a lot of work to do to include more women in the sports industry; however, she believes that her trajectory is a steppingstone in showing women that they can have more than one seat at the table.