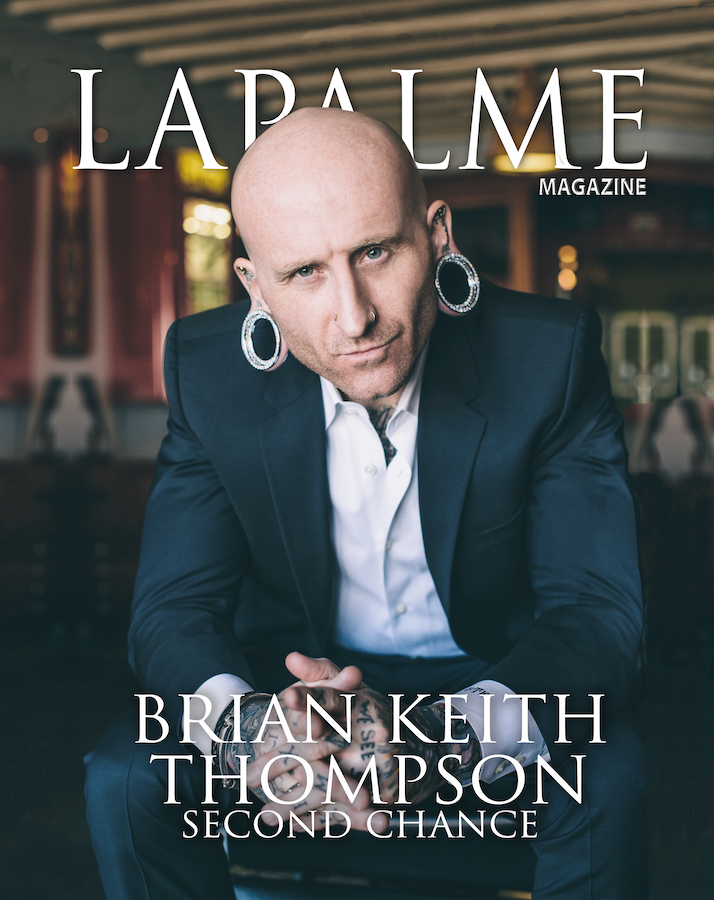 There is a concept in the American experience that when we make mistakes, we are granted the opportunity to redeem ourselves. Through that redemption, we atone for our mistakes, mend relationships that were broken due to those mistakes, and aim to live prosperous lives having learned our lesson. Brian Keith Thompson is the living, breathing embodiment of what it means to live out this concept. In this personal, one-on-one interview, the sole proprietor and Chief Piercing Officer of Body Electric Tattoo gets candid about his life, his business, and how he navigated the obstacles he’s met in both.

Born in San Antonio, Texas, but raised in Dallas, Brian was your average child. After his parents’ divorce in 1980, he often visited his father in Los Angeles and in 1984 decided to stay. Considering himself one of the awkward kids, he was often bullied. “I was made fun of and beaten up quite often, but that never stopped me from fighting back verbally. Even if it got me into more trouble with the bullies, I always talked back and I never submitted to any of them.” But that feeling of loneliness ended at age 16 when he befriended José who was part of a Latin street gang in the Valley. This appealed to Brian as it provided a sense of security and power with this group. “The more I hung out with him, the more I got involved with the gang life which caused conflict between me and my parents.” When Brian’s father decided to move back to Texas, Thompson — as an act of mutiny — refused to relocate and instead moved in with José’s family who ultimately became his second family. Living in a small 3-bedroom house with 12 others and sleeping on the floor could be considered chaotic and uncomfortable for most, but Thompson, for perhaps the first time in his life, “was actually very happy.”

As time went on, Brian continued his life with José as a gang member. The feeling of invincibility and the automatic respect associated with his gang status proved euphoric as he now felt important, seen, and a part of something bigger than himself. But on a dark December night in 1997, Brian’s life would change forever. Waiting to meet up with José, Brian received a call from José’s brother asking to see him. When Brian arrived, he was given the tragic news that José had been killed by the LAPD. Brian immediately rushed to the scene where he found the lifeless body of José lying under a sheet. To say it was upsetting would be an understatement. “I’ll never forget it,” states Thompson. “José was like a brother to me, even more so than my biological brother. He was charismatic and could talk to anybody. He was the coolest guy in the world. I was short, awkward, and did not consider myself good-looking whereas he was everything I wanted to be. I looked up to him. So when he was killed, it broke me to the core.”

Soon after graduating high school in March of 1991, Brian joined the Marine Corps and left for boot camp. Four years later, he was released from his active contract but remained enlisted under inactive reserves, as was required for the Marines. Because he was stationed at Camp Pendleton and still within the California area, he hadn’t completely severed ties with his old life as a gang member. With one foot in each world, he would serve as a Marine during the week and as a gang member on the weekends. Still grappling with the death of his friend, Thompson says he became “a little crazier, a little more of a risk-taker, and it drew me deeper into the gang life.” And then at age 26, his life took a turn for the worse. During what was supposed to be a regular visit to his drug dealer, someone accompanying him got into an altercation with the dealer and wound up killing him. “I didn’t know he had a gun. We took off, running in different directions. And the next day I was picked up by a SWAT unit.” Thompson was charged with first-degree murder and faced the death penalty. Mortified, but not despondent, he fought the case and ultimately won. His charge was reduced, and he was given a 2-year deal for accessory after the fact of murder. “My time in prison ended up being good for me because had there not been any consequences or had I not been held accountable, I think I would have continued down the same path. It wound up being a learning lesson for me. I served my time, got out on parole, and never looked back.” With a fresh frame of thinking, Brian set out to make changes in his life starting with his look. Wanting to have his gang-affiliated tattoos removed, but unable to afford it, he opted to have them covered instead. While working out one day, he met a guy named Gypsy who told him about Body Electric Tattoo where Brian spent the next 5 years getting his gang tattoos covered up.

During this time, he was working for Nortel, a multinational telecommunications company, making over $100,000 per year. But on February 14, 2006, his tattoo artist asked if he wanted to partner up and buy Body Electric. Being underwhelmed with his current job and desperately seeking fulfillment, he agreed to move forward. “But then a week before we were to sign the paperwork the tattoo artist backed out and told the owner that I was still willing to buy the shop as a sole proprietor. I did and, as a result, became the owner of two shops, Body Electric in Los Angeles and another one in Orange County called From the Heart,” thus launching his new career as a business owner. Speaking on his decision to buy the shop and embrace his new life, Thompson shares, “I just leaped in without looking. It was a gut feeling. Something just told me to buy it. It was like a bolt of lightning hitting my head and I knew I needed to do it even though everyone I knew — with the exception of one very close friend — thought I was crazy.”

Fifteen years later, Brian has proved that his decision to buy Body Electric was neither impetuous nor a mistake but instead the optimal decision he needed in order to move forward in his life. As we discuss his vision for the shop, Thompson states, “I wanted everyone to feel welcomed, accepted, and not judged. Because I loved the shop so much as a client, I wanted to build an environment to give my clients that same feeling. And so the very first day I showed up and cleaned the entire shop from top to bottom. I wanted it to be a functioning business in that it was clean and followed the safety guidelines but was not too corporate or free from artistic expression. My main requirements for my staff were that they show up on time and, at the end of the day, everyone cleans the studio together as a group.” The vision paid off and not only brought him success as a business owner but also as an artist as he went on to amass an impressive clientele of A-listers including Beyoncé, Ariana Grande, Cardi B, Christina Aguilera, Chrissy Teigen, Emma Stone, and Jennifer Lawrence — to name a few. His attention to detail and “surgically precise” style of piercing have earned him the trust of his clients. And the studio’s energy remains a safe, no-judgment zone giving its patrons not only a tattoo or a piercing but an experience.

Seeing himself as more of a decorator than an artist, Brian approaches each session with his clients from that perspective. He’s also responsible for coining the term “Constellation Piercing,” which is a collection of piercings meticulously placed along a person’s ear lobe. The style has become extremely popular as it is seen as both timeless and versatile. Having garnered such success, we transition to his hopes for the future. Jewelry design is where he has set his sights to next, and he has already started the process. “I plan to start overseas in Kuwait, Qatar, and Dubai along with a few other countries. I think at some point I’ll step back from doing the actual physical piercings and do more of the designing aspect. I want to keep Body Electric and maybe train some piercers and let them run the studio so I can focus on being the face of the brand.” As for the future of Body Electric, he believes the shop will eventually take on a life of its own and evolve with the times. In terms of his legacy, he notes, “I want to be remembered positively for doing the craft that I love in the studio I love. And I want Body Electric to be a Los Angeles landmark.”

As our interview came to a close, I asked Brian if José were alive to see him today, what would he make of the man he has now become? Poignantly, he says, “I know that he would be proud of me. I don’t have a lot of people who tell me that they’re proud of me, but I know he would. He made mistakes that cost him his life. I also lost my life, but thankfully I got a second chance. He’s still in my heart. I think about him all the time. And I know he would be proud.”

Brian Keith Thompson has lived life in the fast lane. In his darkest days, he found light; in his weakest moments, he found strength. And from his troubled life as a young adult, he found redemption. His story, although not entirely uncommon, is yet inspirational. Building yourself up when you’re broken, leaving behind your old life to create a new one, and correcting the mistakes of your past is never easy. In fact, for many, it’s impossible. However, fortitude, tenacity, and pure determination are what separate those who can from those who can’t. Not only is Thompson a person who can, but he’s a person who has. He’s a survivor. And in doing so he’s reformed his life, revamped his image, and redefined his destiny.