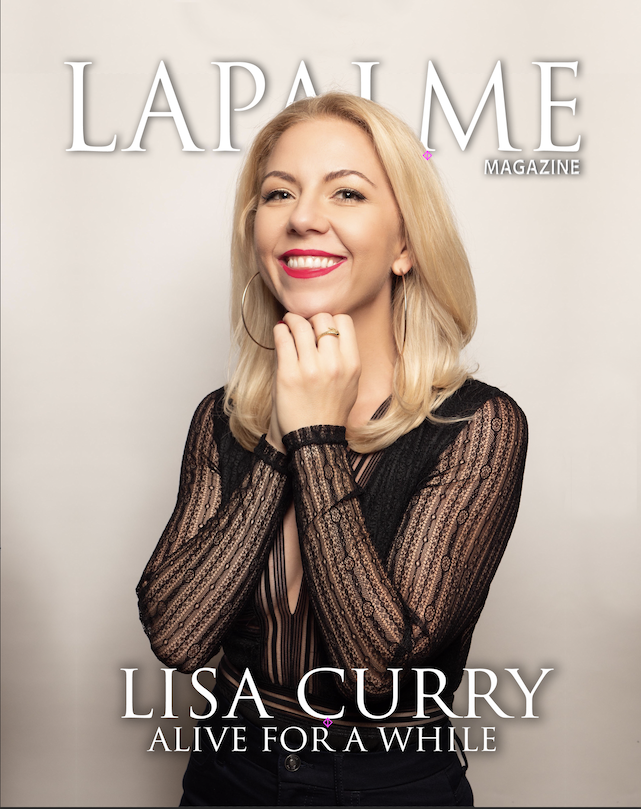 Lisa Curry is an internationally touring comedian and TV writer based in Los Angeles, CA. Her debut comedy album, “Alive For a While” was recorded live in London in the midst of a two-month, nine-country tour that she produced entirely on her own. The album is available now on all streaming platforms and is currently on the ballot for next year’s Grammy® nominations. She’s written for NBC, TruTV, and Comedy Central, where she was a staff writer on ‘The Jim Jefferies Show.’ Lisa is currently opening for Jim on his theatre tour between her own headlining weekends.

Can you tell us a little about yourself and how you got started in comedy?

I grew up on a lake in a small town in Indiana, where I became a licensed boat driver at 9 years old and my parents owned a biker bar – pretty typical childhood. I got into comedy as I get into everything: accidentally. I started by taking improv classes at Second City, only because I was scared of it. I went on to be a part of their house improv ensemble and from there went into standup and TV writing.

Did anyone in particular inspire your love of comedy? What comedians have inspired your own work today?

I decided I wanted to be a performer after seeing John Leguizamo’s show, “Freak” and seeing Chris Rock live is what propelled me into standup, specifically. There are so many great comedians working now that inspire me. To name a few: Maria Bamford, Beth Stelling, Ryan Hamilton, Dustin Nickerson, and Taylor Tomlinson.

Tell us about your current comedy tour with Jim Jeffries? How does it feel to be working with Jim?

Being on tour with Jim is a blast. I was a fan of his long before I worked on the show, so that makes it particularly fun for me. For comics, opening for a famous comedian on a theater tour is kinda like winning the lottery – there are only so many comedians touring theaters and most of them keep their same old friends as openers for years. I really lucked out with this opportunity.

What should fans attending the MOIST tour expect?

They should expect to have a great time and laugh a lot. Jim is hilarious and has a great group of openers.

You recently did a comedy tour in Dubai—what was that experience like?

It was such a great time! The shows were a ton of fun and the crowds were all English speaking – mostly Europeans with a few American expats, so in that regard, it was pretty easy. I was booked with a couple other comedians and we were really lucky to have locals take us out to see things we wouldn’t have had access to on our own, including a belly dancing show and dinner at a brothel. It’s all chronicled in my highlights on Instagram @olympianlisacurry

Can you tell us about your debut comedy album Alive for A While?

I recorded this album in London in the midst of a tour of Europe and the UK where I did 51 shows in 8 weeks in 9 countries. I worked really hard on it and I’m very proud of it. I’d love it if you’ll give it a listen wherever you stream music. And if you’re in the Recording Academy, please consider voting for it in the best comedy album category. It would be a dream come true to get a nomination.

What was the creative process for creating the album?  Any inspirations?

I work a lot from personal experience, so truly I just live my life and see what comes to me as I go along.

Do you find comedy more challenging these days due to the pandemic or cancel culture?

Since I’ve been back out on the road, I’ve noticed people are much more talkative, specifically in the audience when comics are on stage. I think people are desperate for attention right now and I get it, although it’s driving me nuts and I’d love for it to stop. I think cancel culture is largely a myth. What we’ve actually got is fuck around and find out culture.

I love being on stage and connecting with people. The travel is a pretty killer perk. My least favorite part is also the travel. Most airports are a living nightmare.

Anyone in particular you’d love to collaborate or work with one day?

So many people! A few off the top of my head are Adam McKay, Mike Judge, Frank Rich, Roy Wood Jr, Liz Feldman, Nick Kroll, Beth Stelling, and Morgan Murphy.

To get a Grammy nomination for “Alive For a While”