Home » ROSS MCCALL TALKS ABOUT HIS LATEST MOVIE – “ABOUT US” 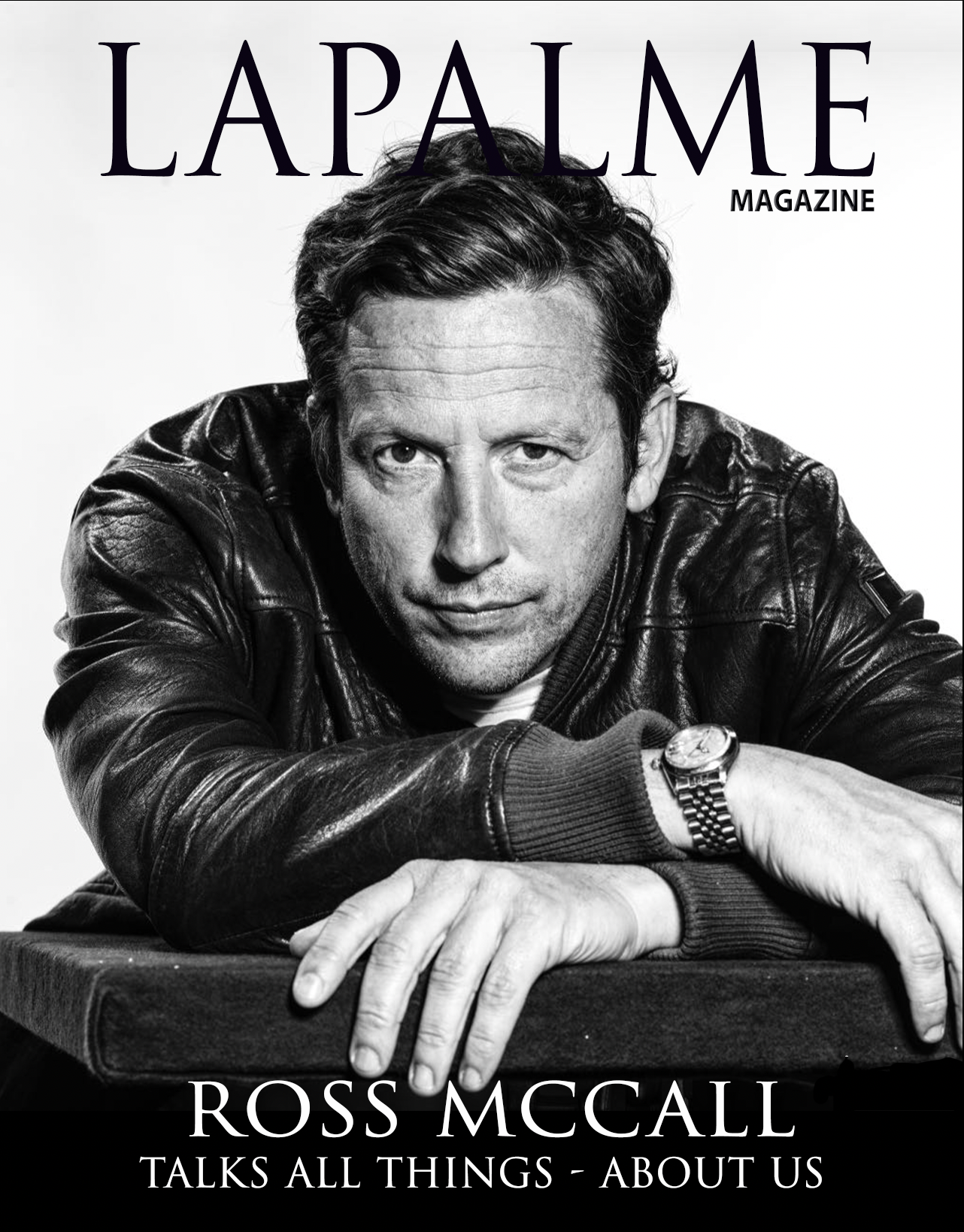 Scottish-born, London-trained, and quite the international thespian, Ross  McCall has over 30 years under his belt with film and television credits spanning the US and Europe.  Previous credits include HBO’s Band of Brothers, White Collar, CSI: NY, The Man, Bones, Ghost Whisperer” two seasons of the critically acclaimed Crash, for Paul Haggis and Glen Mazzara, Luther, with Idris Elba, Castle, 24, Lucifer, and Fear the Walking Dead. Films include, A Walk to Vegas, Hex, The Beautiful Ones, It’s not you it’s me, Willed to kill, and many others.  He also played opposite Tom Hanks in Robert Zemeckisʼ The Polar Express, playing Hank’s scene partner for the entire picture.

Ross is currently lighting up the silver screen in a gorgeous new romantic feature, ABOUT US, starring opposite Allison Miller (ABC’s A Million Little Things) and Allesandra Mastronardi.  The film, shot in picturesque Italy, is a love story that follows a couple looking to mend a broken marriage by revisiting the site of their honeymoon.  You can also catch him in another Aftermath, opposite Ashley Greene and Shawn Ashmore streaming now on Netflix.

We had the chance to sit down with Ross to talk about his new movie, his upcoming projects, and his go-to favorites when it comes to style….

ABOUT US is a breathtaking story following a couple on a path to mending their marriage. What else can you tell us about the film?

The film has such a personal impact on me. Many of the character traits are either similar to my own, or someone I’ve spent time with. I wanted to show both sides of a relationship that everyone could recognize. ABOUT US does that in such an impactful way. It breaks your heart and heals your soul. It talks about forgiving and letting go. Things we all wished we could do when we are at the heights of a relationship but perhaps need reminding of occasionally. It’s also a love letter to Italy and movies of a bygone era. It’s stunning to look at and has a longing palate similar to films of the ’70s through to now. We really wanted to make a film that draws you in and makes you listen and think. And ultimately, it has a healing notion to it. People really have this incredible reaction to it emotionally.

You wrote, produced and starred in the film so this must be an important project for you. What is the underlying message of the film that you hope to portray to the audience?

Love and loss. And how we deal with both. Everyone has either had a relationship fade away, or have lost a family member or even a pet. I’ve heard, and agree, that when a relationship is on the rocks if there is love there, it can be as painful as someone dying. What would you do to heal that wound? Would you fight for it? I also think that in today’s society, we’ve lost our way a little with relationships. Masculine energy versus feminine energy. I never wanted this film to be a ‘he-said, she-said situation, I wanted it to be recognizable in both characters for men and women to relate to. I wanted to show how both parties in a relationship can feel when various truths are revealed, and how we cope with it.

You shot ABOUT US in Italy. What was your favorite local indulgent that you treated yourself to in your free time?

Italy has been somewhat of a home for me since I finished the movie. My fiancé (Allesandra Mastronardi) is Italian, who I met while making About Us. So the first thing that I do when I’m in the country, is head to her Mom’s house for dinner. Italian food is so important. The culture of the sit-down meal. It’s a passion. It really is life. It’s something that took me time to fully understand. When we were shooting, and on previous visits, I’d eat the carbonara and pizza, but didn’t explore the vastness of their culinary wonders. So back then, we’d tire of the constant pizza and pasta. That’s no longer the case. The food, (and the vino), is one of the best cultures for a reason. I’m also addicted to an afternoon aperitvo.

You are originally from Scotland, based in London, but mostly split your time between London, the US, and Italy. With all that travel under your belt, what places have you pulled the most influence from for your work?

I’d say all three. Having left the UK 20 years ago, going back to spend more time there was tough. I left for a myriad of reasons but would come back to shoot when needed. (24 and Luther were both shot in London). But I’ve found a charm to it again. We live in Chelsea, so it’s a champagne problem. LA is still home too though, and I’m there most of the year. Italy I’ve always adored, and seeing it through my girl’s eyes has been such a treat.

You have an impressive background in the entertainment industry and are a true multi-hyphenate with your hands in several cookie jars. Take us back to the start of your career and tell us how you’ve grown into the successful actor, writer, and producer you are today.

I started when I was 11. I did a ton of West-end shows that then led to TV and eventually film. Band of Brothers was the catapult that took me to the US. But I had to commit. Put in the time. The patience. LA is a beautiful mistress, but you have to woo her. Show her you’re keen and willing to see it through. I’ve been writing for a while now. I’ve sold three spec scripts to ABC, Warner’s, and Wonderland. So it’s always been of interest. About Us came from somewhere unknown to me. I mean, however you land spiritually, I believe in a higher cause or energy, call it what you will. The idea came from somewhere bigger than me, and then it sort of flowed. I believe that. Same with my acting. I’m an actor first-and-foremost, so most of my scripts come with me writing for myself. That’s changed a little as I get older, I let go and do what’s right for the project. Like my next film, IRE. I wrote and had it financed in the US, but ended up casting someone older than me in the UK who fit the role better. Then it was way easier for me to direct and get clearance from the UK studio. I guess I love the idea of creating. Putting together the pieces. I’m a lover of film, period. So my taste, I think, is that of a real film fan.

One of your next projects includes the upcoming Apple TV series, SUSPICION, alongside Uma Thurman. What can you tell us about it, and what were some of your favorite moments from the set?

Uma is a dream. Such a sweet soul of a woman. Most of my work is with her and Noah Emmerich, so it was really just the three of us in London and New York. It was also directed by two brilliant minds. Chris Long and… Stefan Schwartz, who coincidentally, or not, directed ABOUT US. So I was with friends. And I loved every minute of it.

Luxury pre-pandemic and luxury post-pandemic look very different for a lot of people. How has luxury changed for you over the past year and a half?

Strangely enough, I’ve been traveling a lot for work during these times. Flying internationally. It was very quiet, which was pleasant. But yes, things have changed. I’m sure it’ll balance again, but certain things we took for granted have taken a break. Especially in hotels and planes etc. Sometimes I feel companies change things to save a buck, but in fairness, everyone was in real confusion and not sure what was okay and what wasn’t. But it’ll bounce back. We just want to do it safely.

What designers are you loving, and what would you say is your go-to look?

I’m a Ralph Lauren addict. There, I said it. I’m a jeans and Tee-shirt guy, for sure. But I also like to throw on a blazer. RL is great for that. I’m also addicted to Arigato classic sneakers. The fact that they come with a great shoe bag and chopsticks and is added plus. It’s the little details. But RL knows me well now. It’s not on purpose, but I’ll wander in for a fitting (They’re doing my wedding suit), and I’m fully in their brand. Sorry, not sorry.

On the topic of the pandemic, how have you kept your mental health in check in these turbulent times?

It totally varied for me. At first, I took in the silence. The change, if you will. I listened to the news obviously, I was in Italy when it first hit, and I just wanted to be up-to-date. Then after the first few weeks, I went into more mediation practices, then the week after I started on the wine at 4 pm. As that faze fizzled, I began working out more. I feel like that was most people’s experience. We were lucky that we had good weather and an outdoor space. I got creative too, and made QUARANTINE parts 1&2 which I released online. We got over 250k views, I think people wanted to see a shared experience. The 2nd lockdown, I was working, so it was all about being constantly tested and going home at night. That went smoothly for me as I’m comfortable at home.

We love the work you are doing for Sea Shepherd. What can you tell us about the organization, and why it’s so important to you?

They stand up to bureaucracy where others shy from it. I think that’s what I liked. Paul Watson also has a voice and he backs it up. Regardless of how you feel about these types of groups, fundamentally, taking an animal/mammal’s life for no other reason than that of a bloodsport is categorically wrong. I’m happy to fly that flag when I can. I made a mini-documentary about the whaling in the Faroe Islands. I stayed on the proverbial fence. By the end of the doc, you have no choice but to side against the Grinds that take place there. It’s an outdated practice.

Lastly, what other projects do you have coming up? Anything else you’d like to share with us?

I’m also appearing in the Offer for Paramount, based on the making of The Godfather. I’d have made the tea for this show, I’m that much of a fan of the film. So when they called and asked if I wanted to come and play, I ran to the studios. We have ABOUT US and IRE both getting released in 2021. ABOUT US is in select theaters in LA, NY, ATL, DEN, MIN, HOU, ORL, PHL, DAL and DET. And then we have IRE coming out in the UK in September, the same time as ABOUT US gets its UK release. I also breeze in AFTERMATH on Netflix, before Suspicion and The Offer make their mark later in the year.

ABOUT US in theatres and available across streaming platforms today.  To keep us with Ross follow him on social media @rcmccall.