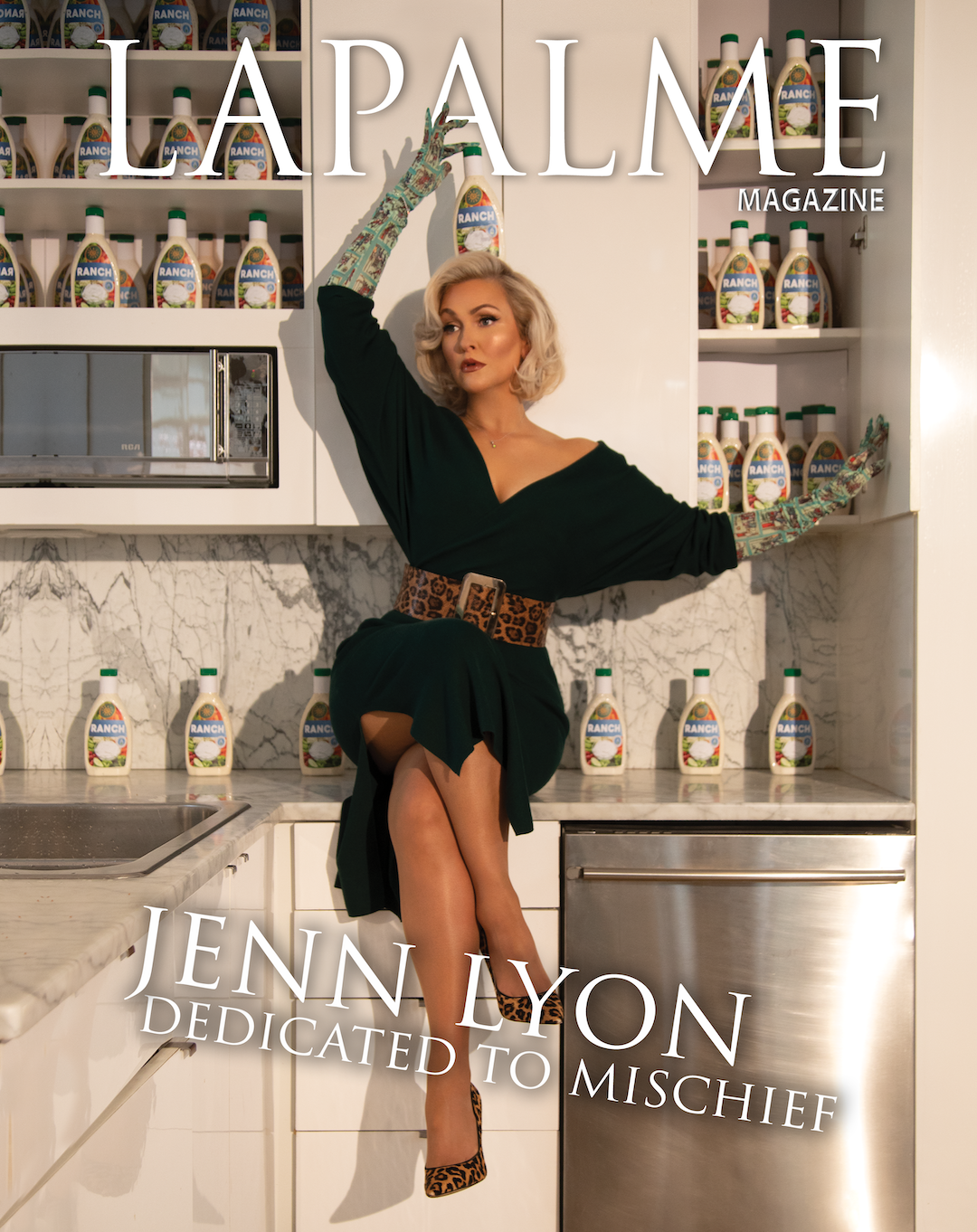 Jenn Lyon knows a thing or two when it comes to fabulous nails—thanks to her hit TNT series CLAWS, but she’s also known for her quick-witted, and “up to no good,” sense of humor. Dedicated to mischief would appropriately describe this North Carolina-born and bred beauty… Have you seen those swear jars?!  Onset in bustling New York City, Jenn was able to incorporate her brilliant comedic timing into an original shoot where she portrayed a different character for each look.

Despite her comedic chops, she has quite a well-rounded resume not to mention an incredible philanthropic spirit.  She’s graced both stage and screen starring opposite the likes of Timothy Olyphant in “Hold On To Me Darling,” and as his love interest in FX’s “Justified.” Other television credits include Lifetime’s “The Neighbor in the Window,” opposite Jamie-Lynn Sigler, “Saint George,” opposite George Lopez, “Army Wives,” “Suburgatory,” “Louie,” and “Crashing.” Film credits include “Phil Spector,” with Al Pacino and Helen Mirren, and independent features such as “Flower Shop,” “Lemon,” and indie hit “Blaze,” directed by Ethan Hawke, which made its debut in 2019 at Sundance.

Having struggled for many years with an eating disorder that almost ended her life, Jenn has become a tremendous advocate for mental health and dedicates her time to being of service to others.  She serves as an activist for NEDA,  as well as The Loveland Foundation (an organization that provides healing and opportunities to women and girls of color).   Jenn also sits on the board for Martha Plimpton’s A is For (a non-profit organization that advocates for women’s reproductive rights), and volunteers for Black Women Lead.  In her spare time, she works at a food pantry in Brooklyn twice a week… She’s a true heroine for women and is the very definition of what it means to be on the forefront of change.

We had the opportunity to sit down and chat with Jenn about her work, her philanthropy, and of course, sketch comedy.

Many of our readers may recognize you from JUSTIFIED, but you star as Jennifer in the hit series CLAWS… What can you tell us about the upcoming fourth season (without giving away any spoilers)?

TNT has threatened my life and the lives of my family if I reveal anything. I want to, but I really value my relationship with Warner Media, and, also I’m afraid they will capture and torture my mother.

Will you miss the series in any way? Any fun behind-the-scenes memories you can share?

I already miss it terribly. I started missing it while I was doing it- I mean, why wait until the end to miss something when you can ruin the present moment by constantly imagining the end?  Every season wrap I cried so hard and after the series ended, I was a disconsolate mess. The cast and crew are some of my favorite people/creatures on the planet and not a day went by that I didn’t laugh my tits off. This last season we were all quarantined in the same building because of COVID so it was like camp, and we did SO. MANY. CRAFTS. Every Saturday we would title the day “Craftacular” or “Craftpocalypse-This Time It’s Personal.”

The series is known for its nails, hence the title, and we’ve noticed you sport great nails off-camera as well.  We saw you participated in a campaign for AAPI month sporting a great set—what’s the upkeep like? How can our readers at home have nails like yours?

To get nails like mine is a rigorous 3 step program that I don’t know if just anybody can do.

1. You have to cultivate a level of anxiety that will lead you to bite and tear your cuticles.

2. You must lose or misplace any hand cream almost immediately upon purchase.

3. You must beg brilliant nail techs (such as Morgan Dixon of M.A.D Nails) who are already mad at you for the condition of your hands, to take mercy on your soul.

Aside from your work on-camera, you’re known for your sketch comedy work.  Are you looking to do more comedy in the future?

I would love to do more comedy. In fact, I just ran into a door jam and did a spit take answering this question.

During the recent FRIENDS reunion, Matthew Perry talked about how much pressure he felt to get laughs when they were filming.  Do you feel more pressure when it comes to a role that’s meant to be comedic as opposed to a dramatic one?

In terms of filming, we didn’t have a live studio audience so the only laughs to get are after they cut, and people can bust out. In theatre, there is certainly pressure, but comedy is a science to me and the exploration of what works down to the most specific detail is fascinating. I feel more pressure with drama, I guess? If you have to cry over and over in a scene, sometimes your tears stop flowing and you have to hit’em with the dry cry and that is objectively the worst.

You’ve got an impressive theatre resume in addition to your numerous on-camera roles.  Do you ever miss Broadway? Which do you prefer, stage or screen (or both)?

I definitely miss theatre. I miss the immediacy of the audience and the ritual of it. But also, you can barely pay your rent and afford to live in NYC even on Broadway so I love it– but, I can actually put away some money if I’m doing film/tv.

Let’s talk fashion… We love how you are so outspoken about body positivity.  Do you think social media negatively impacts the way people see themselves, or do you think it’s helped?

It’s gotta be both I suppose. You are seeing accounts with wildly unrealistic, surgically altered, heavily filtered bodies, and also, you can see accounts celebrating the whole spectrum of different natural shapes, sizes, abilities. It’s been very important for me to discover what it is I value and what I like, as opposed to all the exhausting ideas of beauty and value that have been installed by others.

What advice do you have for other women out there—be they in the spotlight or not, who feel insecure about their body?

My advice would be to remember that the diet industry has everything to gain by convincing you you’re broken so they can “fix” you. Fuck that noise forever. It’s an abusive relationship. Let’s stop participating and giving money to systems that hurt us.

When it comes to style, what is your go-to? What brands are you loving?

You’re an incredible philanthropist and have lent your voice and platform to so many great causes.  Tell us a little about your work with A Is For, NEDA, and Black Women Lead

AisFor is an incredible nonprofit of artists that focuses on funding grassroots reproductive rights organizations that are fighting to advance reproductive healthcare in their own communities AND uses art to reduce the stigma around abortion because we believe the culture of shame around it fosters anti-choice legislation. (And I’m not just saying that because I’m on the board and love it!) NEDA is the National Eating Disorder Association, and it is a one stop shop if you or someone you love is suffering from an eating disorder. They can provide a catalyst to quality care and be a bridge to the appropriate resources. I remember calling their toll-free number and crying to the woman named Lauren on the other end. I was so deep in my own disorder that I didn’t even know the steps to take, and they all felt insurmountable. Lauren was so patient and helped me find a therapist in my area that worked on a sliding scale that I could afford (at the time I was working in a grocery store during the day, doing theatre when I could and had no money.) Black Women Lead is a fantastic nonprofit out of L.A. that focuses on amplifying the voices of black women as leaders and meeting the needs of the underrepresented. They strive to combat police brutality, educate and register voters, feed families, hold protests, donate to mutual aid funds- the list goes on and on.

As if you didn’t have enough on your plate, we hear you also volunteer in a food pantry! Why do you think it’s so important for others to give back?

It’s important that we give back because it keeps us connected and reminds us of what matters. If I have the capacity to in any way reduce the burden of someone else’s life or to make it better, why would I withhold that? It’s our responsibility to take care of each other. It seems like such a given to me that I find it hard to believe it’s noteworthy. It should be mandatory! (Also, if you’re in Brooklyn, come work with us at Holding Hands Food Ministry in Bay Ridge!)

What are you looking forward to this year now that we seem to be returning to a new normal? Any other projects you’d like to plug?

I’d like to say I’m available for all manner of new and normal projects that I look forward to plugging once I get them.