Home » SUSIE ABROMEIT – A FORCE TO BE RECKONED WITH 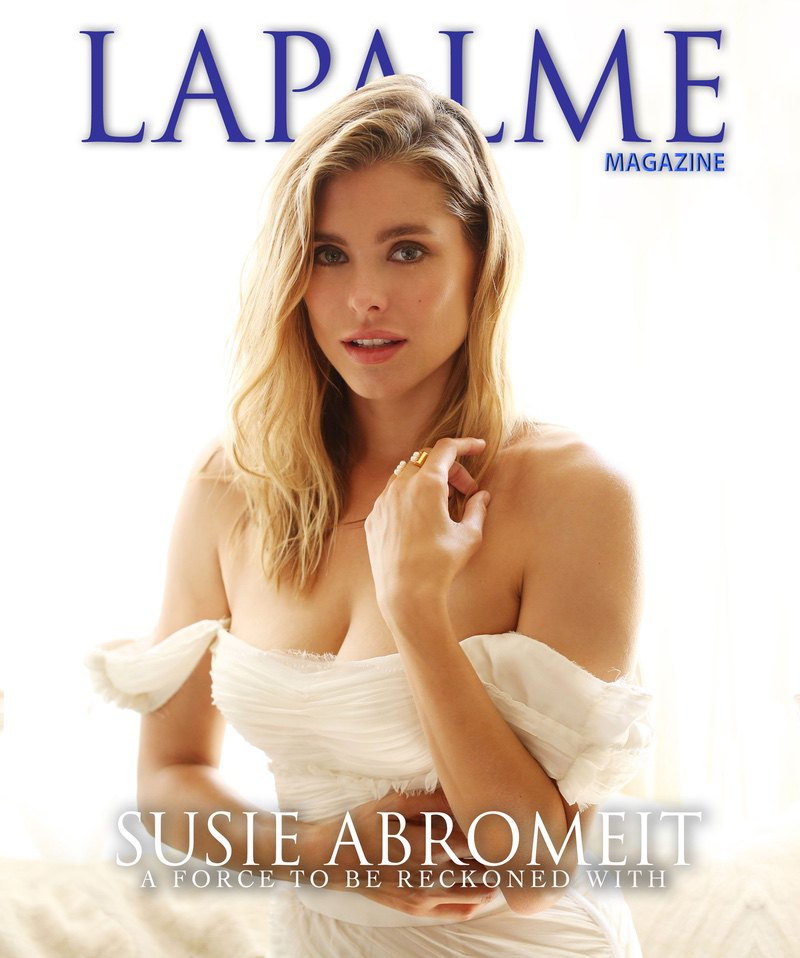 Likely best known for her breakout role as “Pam,” in Netflix’s Jessica Jones, opposite Krysten Ritter, Florida native Susie Abromeit, has proven herself a force to be reckoned with.  Before she made her mark on Hollywood, Susie came very close to a career as a professional tennis player. Receiving a full scholarship to Duke University she was one of the top ranked players (#6 in the US), helping her team earn a number one ranking and NCAA title during her freshman year.  Not long after, however, fate had a different plan, when she decided to transition into pursuing her musical talents, in addition to acting and modeling full-time.

Susie went on to perform a song with Fat Joe for Atlantic Records, and their song “Slow Your Roll,” became a summer hit playing on various radio stations.  A few of her other songs that she performed, wrote, and produced, became top requested songs on local radio stations throughout Florida.   From there, she graced the pages of the Sports Illustrated Swimsuit edition, while simultaneously making her film debut as the lead in the Lionsgate film, Know Thy Enemy, playing a female rapper. Soon after, she began to book role after role.  We’ll next see Susie grace the silver screen in the  summer blockbuster THE FOREVER PURGE, releasing July 2nd.  Beyond that, she’s popping up again in theatres this fall with King Richard, opposite Will Smith, another anticipated feature about Richard Williams, and how he turned daughters Serena and Venus into tennis champions.

We sat down with Susie to chat all things Hollywood, style, and what she has up her sleeve next…

We can’t help but notice that you bear a striking resemblance to a certain movie star (Rachel McAdams) and hear you’ve been mistaken for her.  How often do people bring this up to you? Thank you so much for the wonderful compliment. I absolutely loved her in the Notebook, Wedding Crashers, and Dr. Strange, so that is very big compliment to me. I’ve been told I look like her–so much so, one girl came up to me and asked, shaking with nervousness, if I was her.  Sadly I had to tell her no. And another cute gentlemen yelled as I got into my car, “I love you Rachel, you mean so much to me!” I didn’t have the heart to tell him that I wasn’t her, and just politely said thank you. The stories go on, where people thought I was her at airports, restaurants, etc, and then I have to awkwardly tell them I’m not.  I’d love to play her sister in a movie, though!

Speaking of movie stars, you grace the silver screen in the upcoming fifth and final installment of The Purge Franchise: THE FOREVER PURGE. What can you tell us about your character?  I’m not sure I’m at liberty to say anything about my character, since everything is pretty hush hush, but in typical Purge fashion, it’s pretty wild. And It was incredible doing stunts,  and working with Michael Bay’s team of people. It was such a big set and there were lots of explosions and crazy things happening. I loved working with everyone and had such a blast. Such a wonderful cast, crew, and team!

Without giving too much away, what can fans expect?  Any fun behind the scenes moments you can share? This was so wild to film. I think this purge flips everything on its head to be honest. The stunts were unreal and the crazy things happening were unlike anything I’ve yet to film. One of the last days, we had a full Mariachi band during lunch and the entire cast and crew were singing and having a blast with one another. Definitely was one of my favorite sets to be on.

Now that vaccines have become available, we seem to be coming out on the other side of the pandemic.  Movie theatres are opening, and we’re seemingly getting closer to a new normal.  What are you most looking forward to doing that you’ve missed?  Everything!!! Going to the movies, restaurants, seeing friends, hugs, touch, poker nights with friends, concerts, traveling, all those things.

We hear you’re quite the tennis player, and at one point was well on your way to playing professionally.  What made you change course?  I just knew my true calling has always been acting and storytelling, but it wasn’t until I had hurt my back when I was 18 and had a moment to reflect on that.  When I was 9, my mom had put me in Camp MSSA in Concord MA (it’s an art/drama camp), and there I think I knew this is what I wanted to do: I fell in love with watching plays, with acting, being creative, painting, drawing all of it, but then I also found tennis around the same time, which was a great outlet for me. My mom would enter me in modeling contests, but I couldn’t do anything with it, because my tennis coaches would tell me I wasn’t taking tennis seriously.

It was in that time when I wasn’t playing tennis when I was 18, where I started taking acting classes, and began writing/producing music. A few months later I started having songs being played on major radio stations in Miami. When I went to Duke on a full tennis scholarship, it was there I focused on acting/storytelling/writing/my music etc., and where I really got to explore what I wanted to do. I then started to book the lead in plays at Duke and even paid acting gigs but would have to turn them down because it conflicted with my tennis teams traveling schedule. That was when knew it was time to let tennis go. Simultaneously, I started working with Atlantic Records on a song called “Slow your Roll,” and then it made it to radio stations. And that’s when I embarked on my calling for story telling.

Let’s talk fashion… Describe your go-to style, Any favorite designers? What trends are you loving right now?  Chloe shoes and purses are always my go-to. Frame jeans, Annie Bing and All Saints jackets, my Frye boots, and just got these amazing Stuart Weitzman boots. YSL purses are also my favorite. And then I think my quarantine attire became Aviator nation and Roux sweatsuits that are so stylish yet comfortable that you don’t feel like you’re wearing sweatpants. I think I’ve continued that trend for a bit way after quarantine.

You’re also very active on the philanthropic front.  What can you tell us about your work with Not For Sale? It’s a cause close to my heart. Not For Sale is an organization helping those who survived human trafficking. It’s something we need to talk about. It is the darkest parts of humanity that we as a society want to bury under the rug because it’s just so horrible. It’s the stuff of nightmares, that we can’t even bring ourselves to talk about, so then because it’s not talked about, nothing is done, and when nothing is done, then it continues to persist. Bringing awareness to this is definitely the first step to healing. Human slavery happens everywhere, and it happens a lot in the United States. As a matter of fact, the owner of NFS realized it was happening right next door and that’s when it compelled him to act and do something about it and that’s when he created Not For Sale which builds schools, communities, and helps survivors of human trafficking. I went to on two trips with NFS to Peru and Vietnam. I was so grateful to have been a part of it. It was really eye-opening and I feel fortunate I got a chance to help in a small way.

Giving back is so important.  What advice do you have for people who want to give back, but maybe aren’t sure how? I would say start with yourself first and try to make you the best person you possibly can. If everyone made themselves as good as they possibly can, we would probably have a lot less problems in our world.

I would then try to give back to your family and friends first. And then your community and then the world. Make your life the best you possibly can, in every way you can. Meaning, be honorable, have integrity with your words and actions, have moral character, and create harmony within yourself, your body, your mind, and make sure that’s it congruent in every way.

That’s when my life started to change when I really started to heal myself, make myself congruent in every aspect of my life. And once my life started changing, then I could go beyond my own life, and give to my friendships, family relationships, community, and continue to go outward. I found that the only way I can truly give is when my cup is full and it’s running over so I’m able give.

Continuing to grow and be a better person all the time is not always easy but the more you can do that, the more you will have to give. And I would listen to your intuition of what inspires to want to give back and then follow it. It will help lead you where you need to go.

What other projects do you have coming up? How can our readers stay connected to all things Susie Abromeit?   I just recently wrapped a cute rom-com called  “Love in Bloom,” in Australia which had a wonderful cast and crew, and then I recently worked with Will Smith on “King Richard.” It’s the story about Richard Williams about he raised his two girls Serena and Venus Williams to become tennis champions, which comes out in November. I’m so excited about both of these projects and thank you for your time!