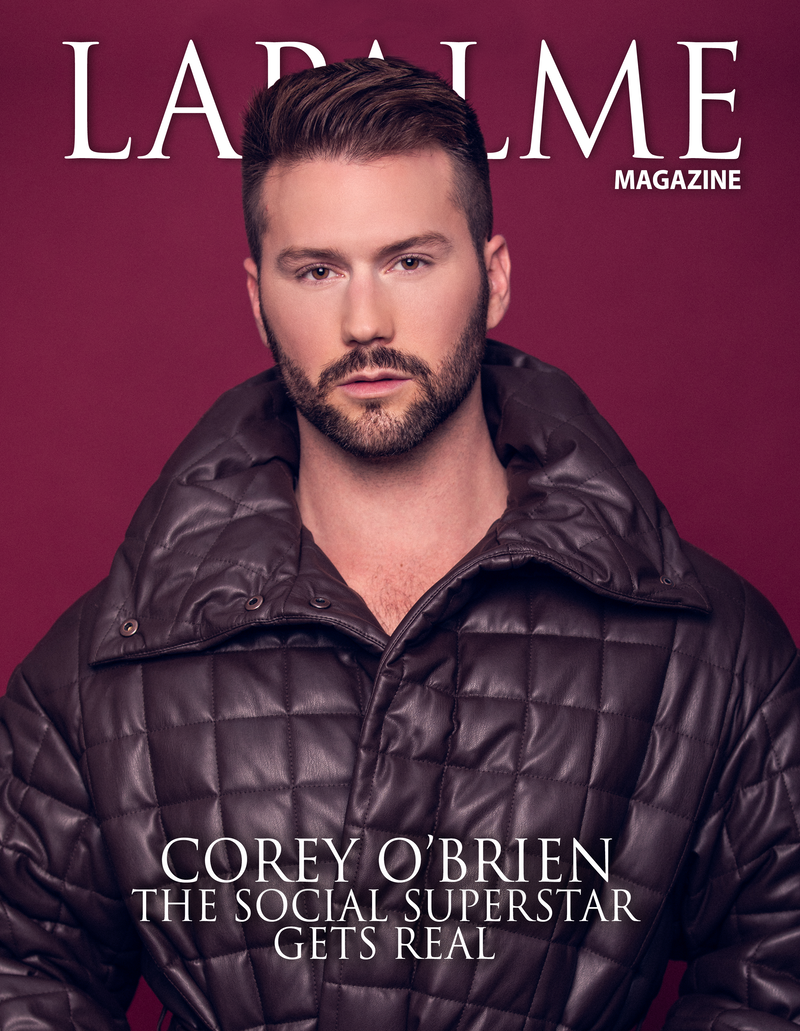 Lapalme Magazine is excited to share a special #PrideMonth cover story on finding yourself, loving yourself, and living in your truth w Rising Social media star Corey O’Brien.

Corey O’Brien is a professional dancer, published model, and actor currently signed with Go 2 Talent Agency – based out of Los Angeles, California. Corey has trained in various styles of dance and gymnastics for over 17 years specializing in contemporary, jazz, jazz funk and acrobatics.

Corey spent his childhood training at The Rock School and The Rock School West. After graduating high school, Corey ventured to New York City where he was one of few accepted into Broadway Dance Center’s first ‘Professional Semester’. Before finishing his program, Corey was offered a job as a dancer and acrobat on Royal Caribbean’s cruise ship, “Freedom of the Sea’s” where he spent six months dancing in the onboard production shows.

After returning to land, Corey was offered an exclusive contract with The Aluminum Show, touring all over Brazil and Spain. Additionally, Corey traveled and performed in Israel under contract with The WOW Show. A promising career in entertainment than brought him to Los Angeles. Corey was cast for MTV’s reality TV show called “Beyond Dance”, where he was a contestant and personality. He trained under and worked with Rich & Tone, one of the most sought-after creative teams in Hollywood.

Corey’s talents have landed him performances with artists such as P. Diddy, French Montana, Nas, Ne-Yo and more. He has been a featured performer in “Funny Or Die!” segments and Snapchat’s show “Sexiest Dance Moves” showing he’s a star on any screen. Corey has been published as a model in staples such as Oprah’s “O” Magazine, Dance Spirit Magazine, Seventeen Magazine and more. Furthermore, he recently modeled in an editorial shoot for W Magazine alongside Nicole Kidman, Michael B. Jordan, and Emily Blunt to name a few.

What does Pride Month mean for you? Pride Month is something that I feel should be celebrated year round. For me, growing up in a small conservative town in Pennsylvania as a gay man was intimidating. I was often ridiculed for choosing dance over soccer or barbies over trucks. Young kids today are still facing they same type of ridicule, discrimination, and hate in towns big or small across the country. We as a community are often misunderstood and treated less than just because of how we were born and who we love. Pride Month is an opportunity to be celebrated instead.

To me, this month is a reminder that our existence on this earth is not a mistake. We as a community, as individuals, are beautiful, diverse and powerful beyond measure. We have fought for the respect and equality that is very much deserved and keep fighting for what is right.

You’ve used humor and satire in your Social and tik tok video to combat the hatred that is still very prevalent today. How has this approach worked in providing a new perspective? This approach has been a game changer because I have found a way to laugh off the ignorance and stand strong in who I am. So many people have tried to use who I am/the way I was born as a way to try and hurt or belittle me. My sexuality cannot be weaponized against me and I have found power in that.

Another reason I have used humor to combat the hate is so I can provide hope and positivity to children who are apart of the LGBTQ+ community. If I am able to be someone kids look up to, I will continue to live my life unapologetically, with a smile on my face and a witty comeback to any type of hate. I have come too far in my life to care what others have to say about me, especially strangers on the internet.

I do want to make it very clear; I am not giving hate a pass. Are the comments funny? No. Are the comments necessary? No. Is homophobia a joke? Absolutely not. Instead of combating hate with hate, I want to show that we as a community are powerful and stronger than any negativity thrown our way.

As a dancer health both mental and physical is important, tell us as Corey how you find balance?  In my past, I did not take care of myself the way I needed to but now I put my mental health before anything else. Your mind is the most powerful muscle in your body, and it should be the muscle you care for the most. In my life, therapy and journaling has been something I relied on to create clear intentions and focus on what really mattered. I believe therapy is something everyone should take part in at least once in their life.

As you know, dance has always been my go-to. It was the one constant in my life that has always been there for me to fall back on. I have used dance as not only a form of self-expression, but it has saved me during many different trying times. It has been a wonderful escape and an incredible way to release different feelings. Working out is another one of my favorite methods of self-care. I have found breaking a sweat and releasing endorphins to be therapeutic and always an incredible way to center myself.

Life according to Corey is your podcast and perhaps your most real way to go deeper w fan? In your most recent episode, you discussed your sobriety and story of addiction.

Take our readers into this journey and why it’s important to share the story and what you hope comes out of doing so?  My battle with addiction started at a young age where I was desperately trying to run from the feeling of shame and embarrassment, I felt from being “different” than my peers. Instead of loving myself and embracing who I was, as a kid I allowed the voices of others to dictate how I viewed and treated myself. I viewed alcohol as an escape. I thought it was going to bring me confidence, but it stole it from me. I thought it would bring me friendships and connections, but it ruined all the relationships I had. It brought nothing positive to my life, only chaos.

Everything I have today is because of sobriety. If I don’t share my story of my addiction and what I have been through, then that means others who are struggling do not get to hear the story of hope and recovery that comes along with it. I want to bring more of the community together, make everyone feel included. As addicts and alcoholics, many of us began using because we never found our place – where we “fit in” or felt a sense of belonging. I want to speak up and out about the struggles and challenges we may face as navigating sobriety and how everyone, whether you are an addict or not, have been affected in some way or another regarding addiction.

Fashion is a key in the art of storytelling. What does it mean to you? Fashion to me is not only a way to express yourself but about finding confidence in standing out and being true to who you are. My personal style has changed so much throughout the years ever since I became more comfortable in my own skin. It has been fun exploring different styles, sizes, and colors.

I think the most important thing for anyone is to enjoy what you are wearing. Your clothes should accent different parts of your body and flatter it. You should never hide behind the outfits or use it to fade in the background.

Being a part of a high-profile relationship how do you retain yourself in the media frenzy surrounding your relationship? Social media, the internet and opinions of others is not what I base my happiness around. Along as two people are happy and healthy than nothing else matters.

Podcast / social media entrepreneur are just some of your titles what does the future for Corey hold? As the world is opens back up, I am more than excited to hit the ground running. Everything that I have been doing in my career, I will continue to do but I am now taking it to the next level. I have recently done some incredible dance jobs that I am excited to share and have been working on my podcast “Life According to Corey” and some other amazing projects. This is only the beginning.

Where can our readers get more information and stay up to date on all things Corey?  They can find me on Instagram and TikTok at @corey_obrien