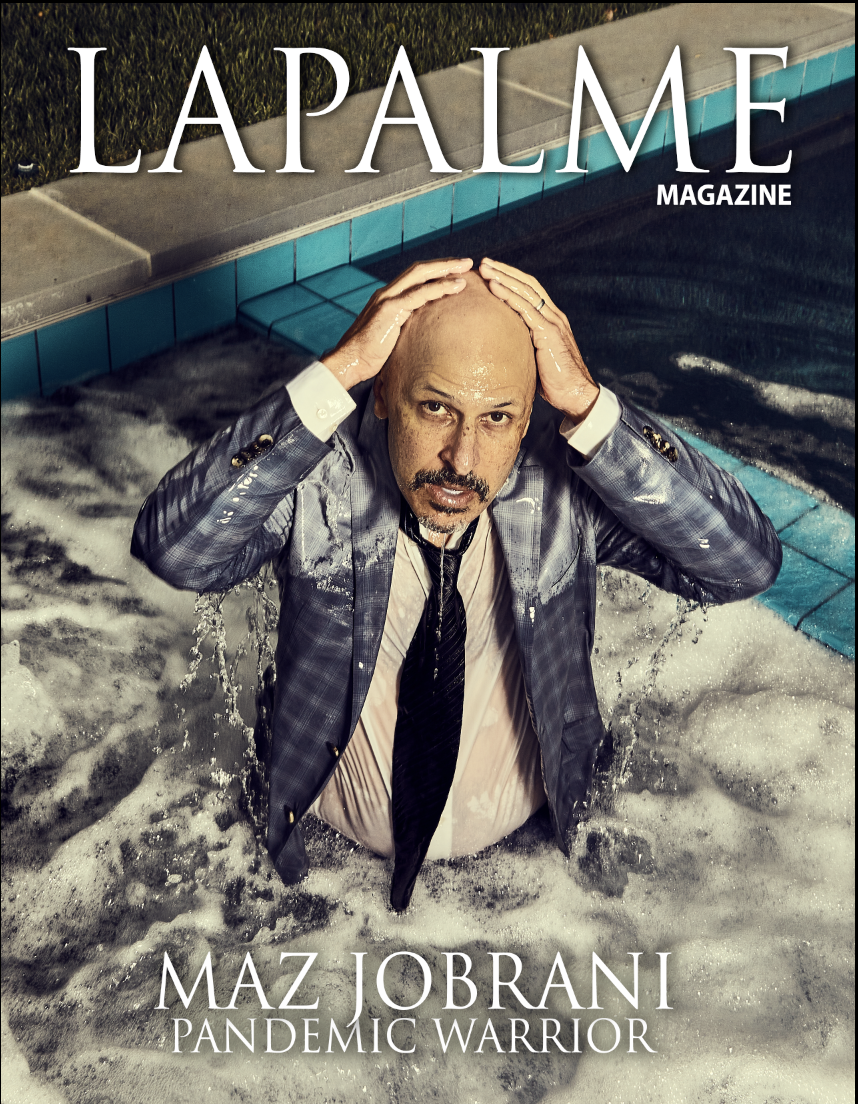 Comedian, Actor, Producer, Author, Podcast Host… these are just some of the titles that go along with Maz Jobrani, whose new comedy special PANDEMIC WARRIOR, is streaming now on Peacock.

As an actor, he was most recently seen playing the loveable “Fawz” on the CBS comedy SUPERIOR DONUTS.  You’ve also seen him on television’s most popular shows including GREY’S ANATOMY, CURB YOUR ENTHUSIASM, BETTER OFF TED, LAST MAN STANDING, and SHAMELESS.  He’s also graced the silver screen in films such as JIMMY VESTVOOD: AMERIKAN HERO, Sydney Pollack’s THE INTERPRETER, Disney’s DESCENDANTS, and Ice Cube’s FRIDAY AFTER NEXT. Maz’s other standup comedy specials include IMMIGRANT, which was filmed at the prestigious Kennedy Center and is a NETFLIX original, as well as 3 additional solo specials on SHOWTIME: BROWN AND FRIENDLY, I COME IN PEACE, and I’m NOT A TERRORIST, BUT I’VE PLAYED ONE ON TV. His podcast, Back To School with Maz Jobrani features some of the most fascinating celebrity guests and experts and is available on Spotify and Apple Podcasts.

We got a chance to sit down and chat with Maz about how he kept the laughter flowing during the pandemic, why it’s essential for overall wellness, and of course, what he looks for when it comes to “stand-up” in style.

Your new comedy special, PANDEMIC WARRIOR, is streaming now on Peacock, but was originally called Peaceful Warrior.  Why did you decide to change the name?  I changed the name because the special was originally filmed in December of 2019 in Dubai. By the time we were hoping to release it, the pandemic had hit and the whole world had changed. I saw a few specials that came out in that period that seemed like they had been filmed on Mars. They had audiences sitting next to each other, unmasked with the comedian doing jokes about traffic, flying, etc. All things that made sense before the pandemic. So, I decided to add a couple of segments to the front and end of my special where I was doing comedy into a computer the way we had to under the pandemic. It was basically the pandemic portions of the special and helped put the special into context. Those segments were shot in a closet at my house and showcased comedy under the pandemic. So I changed the name to show the change that we experienced as comedians under the Coronavirus.

Given the pandemic, you took to “sit-down,” comedy with virtual performances, and managed to keep the fans laughing.  What was it like to perform virtually, and would you say this is something you’ll continue to incorporate beyond the pandemic?  At first I was hesitant to do Zoom shows because comedians need a live audience to feed off of. It also helps our rhythm with delivering jokes. Comedy is an art form that really requires feedback. However, once I figured out that we could unmute a handful of the viewers on Zoom and encourage them to laugh, that changed everything. It actually became fun to do shows and also see people in their homes watching. It allowed me room to mess with the audience and do crowd work as well. If I could keep doing sit-down comedy I would. I am super excited to be back on stage performing but hope to do more of the Zoom shows as well.

Mental health has been at the forefront of topics lately.  Why is it so important to keep laughing? Would you say that there is more of a need for comedy now than before?  Laughter has always helped us get through hard times. I watched a lot of comedies with my family during the pandemic. I think it’s important for people to watch standup comedy and forget about their day-to-day worries. Given how crazy the world is these days, I would agree that comedy is needed more now than ever before.

Our readers love luxury.  What would you say are your favorite indulgences when it comes to treating yourself?  I love getting a massage and then just napping a little afterward. I also enjoy traveling to nice places and just letting go of all the day-to-day stresses. it’s great to log off social media sometimes and just listen to the wind.

When it comes to fashion, how would you describe your go-to style?  What designers do you love?  I would say that’s a question for my wife. She has become my de-facto stylist. That said, she likes to shop from smaller shops in Los Angeles and find me nice, but casual wear. We also go to places like James Perse or Buck Mason for T-shirts. Most of my suits are Hugo Boss. And you will often find me in Puma sneakers and caps walking around town. The truth is I’m not super loyal to any one brand. Just like comfortable stuff. Does that mean I’m getting old?

You host your own podcast, BACK TO SCHOOL WITH MAZ JOBRANI.  What can you tell our readers about it and where can they tune in?  It’s a podcast that started when my kids would ask me questions that I didn’t have the answers for. I decided that rather than going to Google, I would bring in experts and learn from them. So every episode begins with a question from my kids for my weekly guest and then we go from there. I co-host it with my comedian friend, Tehran and we’ve had guests on from all walks of life from a lady who is a cave diver to a former FBI counter-intelligence officer to Robert Reich to Michael Cohen and more. It’s become an excuse to talk to some really interesting people and we try to make it fun as well. People can find it on my YouTube channel as well as iTunes, Spotify, or anywhere podcasts are found.

Aside from being a comedian, you’re also an accomplished actor with roles in CBS’ Superior Donuts, Grey’s Anatomy, Curb Your Enthusiasm, The Interpreter, and Friday After Next, amongst numerous others.  How do you balance your time between stand-up, and taking on acting roles? Is there one that you prefer over the other?  When I first started in the business my acting roles helped support my comedy career. A few years later, my touring took off, and then I was able to be more choosy with the acting parts that I accepted. The good news is, that since I can make my own touring schedule if an acting opportunity arises that I want to do, I can build my schedule around it. Ultimately, I enjoy both and I am always looking for good projects to do.

With the need for continued diversity what are you hopeful for moving forward? Do you think the entertainment industry is moving in the right direction?  From the time I started in Hollywood till now, we have made a lot of progress. We now have shows like Ramy, Master of None, the Mindy Project and more, where people from these backgrounds can tell their own stories. I am happy that networks seem to be embracing diversity since America is such a diverse country. Ultimately, though, when you watch shows from creators of different backgrounds I think you realize how much we all have in common. I hope the industry continues to embrace diversity and I don’t see how they can avoid it any longer.

You’ve given many commencement speeches in the past.  What advice would you have for those embarking on a new chapter in their lives?  I wanted to get into acting and comedy from a young age, but was discouraged by my parents who wanted me to choose a more secure path like medicine, law or business. It wasn’t till I was in my mid-20s when I had a light bulb moment and realized you live once and you have to live for yourself. You can’t live to please others. So, if you have a passion that you’ve wanted to pursue, don’t delay. Get going with it today. Even if it means enrolling in a class in the subject you’re interested in, get into it ASAP!

Lastly, what other projects do you have coming up? Anything else you’d like to share with us? I am just happy to be back touring again. Lots of live shows coming up that people can find on my website – mazjobrani.com. I am also trying to develop a new show based on my life. I will let you know as soon as that gets going. People can follow me on my socials for more stuff too – @mazjobrani.