Home » RISE TO THE TOP! NATHANIEL POTVIN DEBUTS IN THE PROM 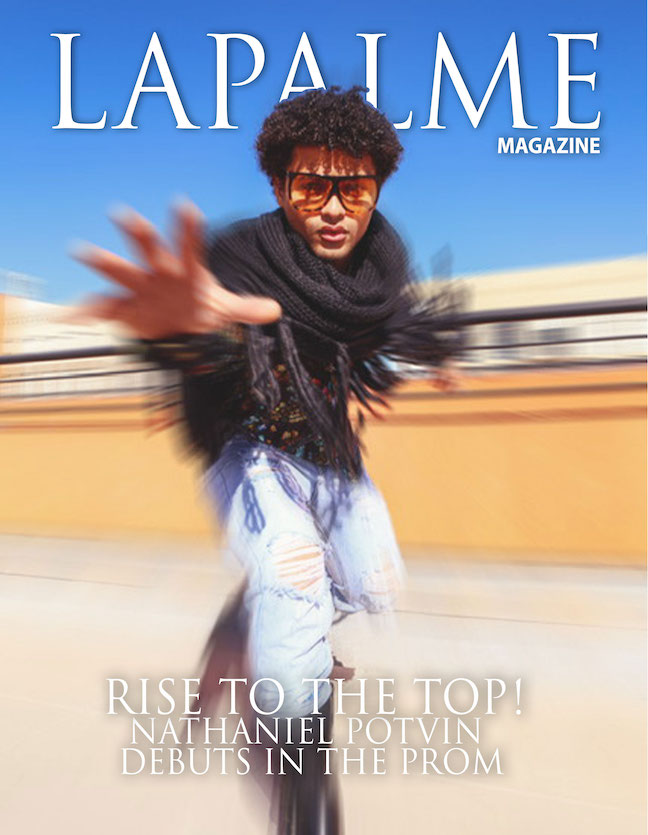 Nathaniel Potvin is one of the most charming young actors in Hollywood. Not only can he sing, dance and supports many nonprofits he is in the cast of Netflix’s hot new holiday special THE PROM, co-starring with Hollywood heavy hitters like Meryl Streep, Keegan Michael Key, and Nicole Kidman. We recently caught up with the triple threat in Los Angeles to talk about his latest adventure and what it was like acting with Hollywood royalty.

Congratulations on the release of Prom! It seems to be a huge hit! Tell us all about your initial thoughts when you landed the role and how did you relate to your character?

My initial thought when I landed the role was pure elation! Knowing I would get to do what I love to do and get back to my singing and dancing roots was very exciting. When it comes to my character in the film, Kevin, we are drastically different—at least up until the end. Kevin is one of the kids who goes to school with the main character, Emma, and teases her because of her sexual orientation. He is a popular jock at the school, bigoted from what he has learned from the adults.  Finding how to relate to this character was hard because I had to figure out what made him who he was.  I finally landed at him being motivated by the fear of something he doesn’t fully comprehend.  I pulled from some of the bullies I used to see when I was in high school, who were centered on not being able to understand that love is love.

The cast is astounding! Were you starstruck? I saw your selfie with Meryl Streep, what was she like to work with, and did any of the star-studded cast give you any advice?

I was very star-struck to meet Keegan, Nicole, and Meryl, of course. Working with them was a dream! They made everything so fun and enjoyable. They were really aware of their celebrity and made everyone feel very comfortable when around them. I keep saying that it was the ultimate masterclass to watch them work and act together. Keegan gave me some great advice: to continue to learn on set, whether it be from other actors or from reading… just be constantly learning.

Everything Ryan Murphy touches turns to gold, any other plans to work with the hitmaker?

Of course I have plans of my own! I honestly would love to work with Ryan again because while I was on set it was one of the most enjoyable times of my life. But who knows… he seems to like to keep it in the family so I might be getting that call soon.

This has been an exceptional year for you. Between being in one of the biggest movies on Netflix what are some other things you are thankful for?

I am super thankful that everyone in my immediate circle is happy and healthy. I am also thankful for all of the amazing people who have been standing up for the injustices around the world, but also to everyone who voted and helped people to get out and vote.

What do you do with your time when you aren’t doing backflips and hanging with Meryl Streep and Kerry Washington?

I am usually found trying to be creative. I have this super 8 camera that I am obsessed with shooting on, so I have been doing a lot of home videos with that– but some time here soon I see myself working on more narrative content with the camera. You can also find me cooking and baking which has been great with the holidays. Most of the time you can catch me watching movies though!

What are your plans for the future? You are only 21 but look 16… that’s going to give you a lot of longevity. Do you want to continue in the teen genre or any other thoughts of other characters you want to explore?

My plans for the future are very bright! I have a lot of high hopes for myself moving forward and I have a lot of determination to back that up. I honestly would love to do more teen roles and even start creeping into adult roles, but as long as I look like a teen I am going to utilize that and use it to my advantage. I just want to participate in roles that have more substantial meanings behind them; roles that I am proud of showcasing to the world. I know I definitely want to explore more musicals though! The Prom ignited a musical flame inside of me, and I want more of it!