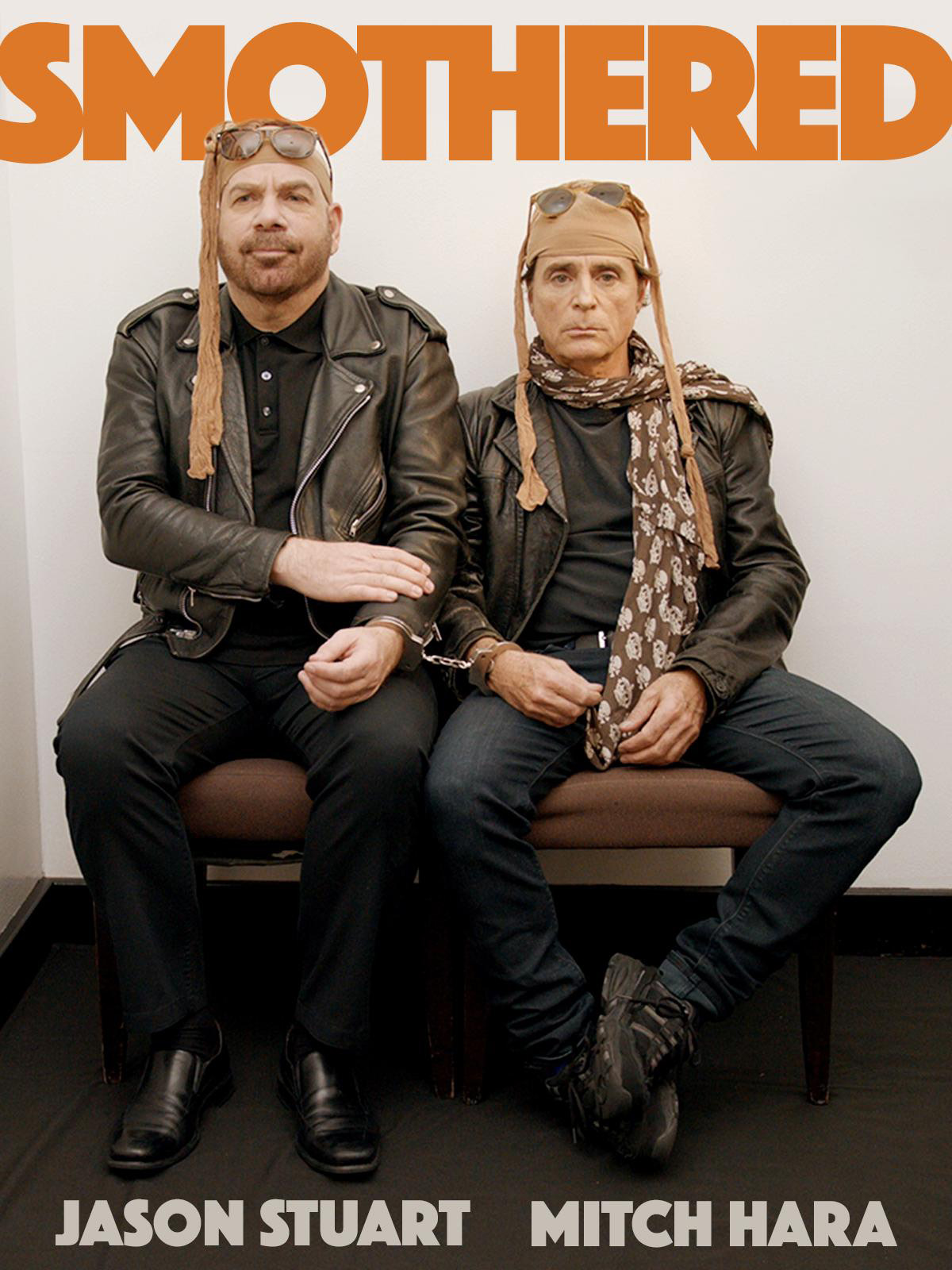 SMOTHERED is about a hateful gay couple who can’t stand each other but can’t afford to get divorced. It’s a hysterical and sobering look at a gay, Jewish, middle-aged couple trying to salvage their hideous relationship in therapy hell. It’s a touching, psychotic exploration of love, crashing to bits like cheap china from the Olive Garden. It’s an insanely universal dynamic that all couples can identify with. It’s also a celebration of diversity!

JASON STUART (Ralph) and MITCH HARA (Randy) are the co-creators and co-stars of the outrageous new comedy SMOTHERED already going viral. The short form series is 7 – 5 minute episodes. You can binge the whole thing in 30 minutes! You’ll laugh your ass off, feel better about yourself and your neurotic relationship.

JASON STUART appeared in THE BIRTH OF A NATION starring Nate Parker & Arnie Hammer, the thriller IMMORTAL opposite Sam Levine & Dylan Baker and the action film ABDUCTED on Showtime now. His autobiography SHUT UP,IM TALKING recently came out to rave reviews on CCB PUBLISHING. This pioneering out comic has done standup all over the country. And he just completed an episode of GOLIATH starring Billy Bob Thornton opposite JK Simmons & Bruce Dern and was on LOVE from Judd Apatow last season.

MITCH: This whole thing started because we had a huge fight.

JASON: It wasn’t that big.

JASON: I invited him to do a project — everyone had to be 50 or older.”

JASON: You’re so judgie. He sexualized everyone.

MITCH: I did not. Those 2 fetuses were flattering themselves. They had more baggage than an oversold flight on Aeromexico. Who’s the bitch from Baywatch?

MITCH: She said she loved when I sexualized her.

JASON: She did not.

MITCH: She did too

JASON: So, I said, maybe you shouldn’t be involved.

MITCH: I said, I applaud your decision. Peace out, muther fucker.

JASON: So, I thought we were good.

MITCH: Yeh. I was like bye girl! Then, he texted me 90 times and left me messages and I was thinking we’re done. Leave me alone.

JASON: I only texted him twice.

MITCH: It was 90 times. And i was really okay without him in my life. But after the 95th text I figured fuck it — I’ll call. And he was like–

JASON: –I don’t know why you were so insulted. You know I respect you and love you.

MITCH: I’m like, of course you do. Everyone does. But I still don’t care. I’m good. We don’t have to be friends. and he said—

JASON: –I’m not willing to give up a friendship.

MITCH: And I said, well I am! And I hung up. Then I thought about it. And the best part of our relationship is how we spar and it’s funny. So, I called him back and said, here’s my idea and this is what we’re gonna do and all you have to do is shut the fuck up.

MITCH: I like to believe I have an 8″” cock, but it’s not true either. And lights, camera, action… SMOTHERED was born.

JASON: And he never lets me talk!”

“MITCH: And the fight never stops. JASON: He thinks I am this character. MITCH: He is—

MITCH: So this is our relationship if we were lovers. JASON: BUT we are not a couple—

MITCH: God forbid. Oh! When I was in Puerto Vallarta, this couple had been married or together for like 20 years and I asked, ‘was it always good?’ and the hubby said,

him to die. MITCH: And then the other dude said, sometimes all I want is an “”I’m sorry”

JASON: We wanted a really diverse group of characters and actors. They are all friends of either me, Mitch, or our fabulous director Terri Hanauer.

MItCH: Terri is everything. We made a pact — just because they were friends — wasn’t enough. They had to be the most talented for the part, and we all had to agree.

MITCH: And if we didn’t, two yeses would win.

JASON: Ultimately, we wound up with an Asian woman, a little person, a 7-foot-tall trans woman, a black-lesbian-Jew–

MITCH: –Chaka Caplin, a plus-sized black man from Cats, an OCD gay man and a fluid dog. Between Jason and me, we didn’t want any more “white” people. We just wanted our series to reflect how we wanted to see the world—”

“JASON: –populated by unique, multi-racial, culturally diverse people thriving together. We cast them for their talent, not because of their race or gender assignment.

MITCH: A reporter asked us, how our series went viral so fast? I said, I stalk people till they watch it or die. I threaten their family. I tell them cars without breaks are a little dangerous.

MITCH: Other’s assessment of me is none of my business. Seriously, I turned on the world and the world turned on all their friends and boom in 3 weeks we’re on everyone’s Top Ten List of New Comedies to Watch!

MITCH: I think our show is universal. Oh, and then some morning show from Chicago asked, “”It is hard to believe that you have such a long list of credits given your tender age?” I said, “Hell no. I’m talented, relentless and I’m not tender, I’m ageless.”

JASON: You have to stop doing that. Under age on his Facebook profile he put “ageless” and they froze his account because he was too young to have one!

MITCH: I’m who the universe needs me to be. Jason refuses to be relevant. JASON: He never lets me talk.

skills are so heightened.

JASON: See? Then on a Toronto talk show asked, if being gay is still an issue in casting or being rejected for parts?

MITCH: And Jason jumped all over this question like a rabid poodle in heat–

JASON: it’s an issue I feel very deeply about. Because when you are out, you are out for me and I for you. It’s really about love.

MITCH: I’m more like yes, yes, yes it did exist, it’s still around, we’re making progress, are we done? No. Are more people brave and busting through walls daily? Hell yes. We are getting more and more inclusive and depicted in all the bright colors of humanity. Yes, baby, yes. But if I’m not invited to the party, I print my own invite and kick down the door. “Hey! The love and light just entered the building!””

MITCH: We both do. There is nothing sacred to me. Everything is part of my creative paint box. Yes, the shit exists. Does it stop me? fuck no. For me; everything is “yes.” Even “no” is a slow yes. I will not wait for someone else to give me permission to create.

MITCH: Shut Up! You don’t talk like that. You’re 100 years old. JASON: Don’t talk to me like that. They will think you don’t like me. MiITCH: I do dream about killing you in your sleep.

JASON: You can’t I’m already dead inside. Oy, what have I gotten myself into? MITCH: A big fat JUICEY HIT!

JASON: Oh yea, I forgot. MITCH: Because your old—

JASON: Why do you have to have the last word? MITCH: I don’t.

JASON: Ok. Thank you everyone! MITCH: Yes, thank you!