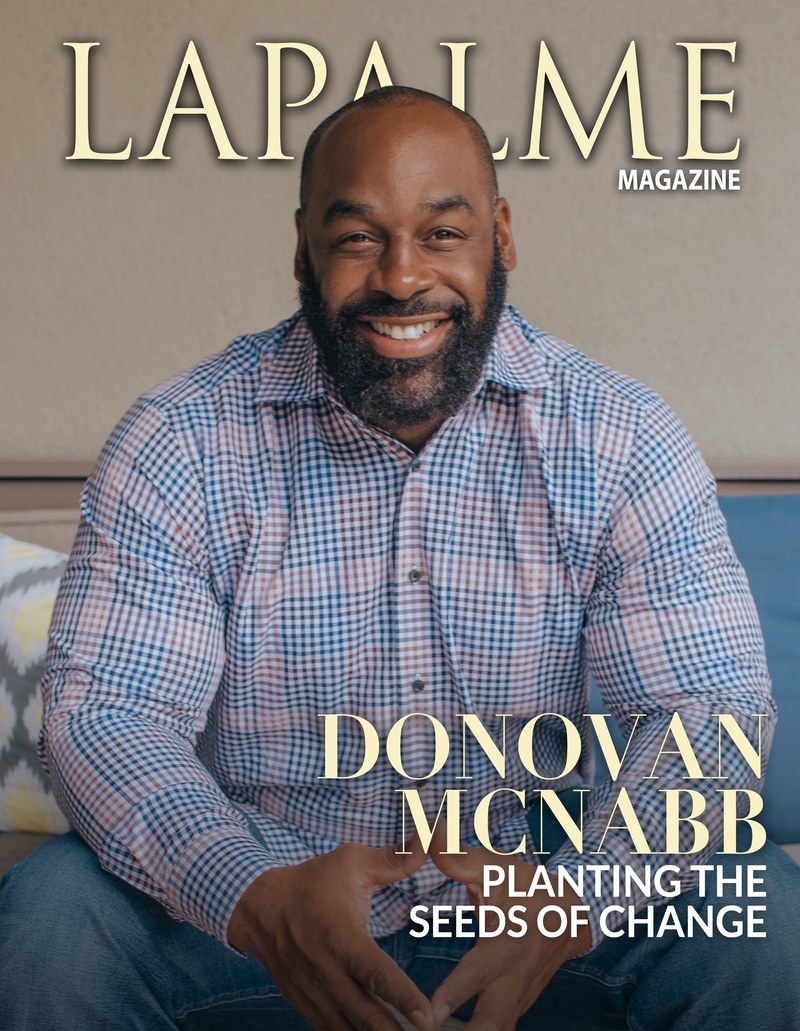 Trailblazing philanthropist  Donovan McNabb is a focused and poised gentleman with a heart so big you can feel his positive energy from wherever you are. Did you know Donovan was one of the first black men in the NFL to fight for equal pay among black quarterbacks? Bringing awareness to these touch-points indicates Donovan’s dedication to his generosity and heartfelt drive to help and protect others.

We recently had the chance to speak with Donavan about his thoughts on a subject we all need to be focused on, black lives.  Standing 100% behind #blacklivesmatter Donovan shares why now is the time to show support and speak up for those who need our advocacy.  In discussing where McNabb is concentrating his energy right now, he mentions it starts at home.

Raising four children is the most crucial role of his life and for a good reason. As a father, husband, and parent, he wants to protect his family. He educates his children by engaging them in an open discussion about what is happening in the world, not by sheltering them from the truth. Donovan instills this knowledge to empower his children to be safe, be a voice of change, and not live in fear.  Not so simple in this complicated world.  Donovan believes in positive change. He knows police brutality can, should, and has to stop. This universal issue must be handled from multiple levels. He knows first hand the challenges this entails as he has a family member in law enforcement.

Donovan shared his thoughts about how Mark Cuban is speaking out on change. Cuban recently said in an interview.  “Racism is a generations-old problem that we need to address and change as a country. I think a big part of the problem is that the vast majority of Americans are uncomfortable having honest discussions about race.” On this, McNabb agrees, and we do too. It’s complicated but straightforward, Donovan states, “open communication, can start the wheels turning for the next generation.”

McNabb mentions leading by example. Such as Maria Taylor’s words, “My patience left my body when I watched George Floyd take his last breath,” Taylor said in part of a viral clip that has now been viewed over six million times on Twitter alone. “For the first time, I feel like I can go on TV and say certain things. For the first time, people feel that they can tweet certain things, and people can be held accountable for the things that they are putting on display in public. And I’m not going to apologize for that.” Convincing truth, visceral, and authentic. The bottom line is that we all need to be more empathetic, level-headed, and respectful toward one another.  McNabb is carving the future through mentoring and public speaking while aligning values and teaching empowerment, expect great things from Donavan as he steps up to do his part.

A first-round draft pick in 1999 by the Philadelphia Eagles, and the second player overall, Donovan McNabb has raised the bar with superstar accomplishments on and off the playing field. He took over as the Eagles starting quarterback in game Ten as a rookie and never looked back. His .612 (98-62-1) win percentage as a starter ranks near the top among active QBs. His 98 wins rank 12th in NFL history behind eight Hall of Famers and three sure-fire selections (Brett Favre, Tom Brady, Peyton Manning). During his first 11 seasons, Donovan McNabb helped resurrect an Eagles franchise that finished 3-13 in 1998, the year before he joined the club. With Donovan McNabb under center, the club has posted one of the best records in the NFL, averaging ten wins per season. In addition, the Eagles went to the postseason eight times, won the NFC East Division five times, played in five NFC Championship Games, and had their first Super Bowl berth in 24 years. Donovan McNabb quickly established himself as one of the finest players in Eagles franchise history. His 4,746 pass attempts, 2,801 completions, 32,873 passing yards, and 216 TD passes are franchise records. Donovan McNabb piloted the club to more wins (92), postseason games (16) and postseason victories (9) than any other QB in team history.

On April 5, 2010, Donovan McNabb was traded to the Washington Redskins. Despite starting 13 games in 2010, he led the Redskins to more wins (5) than they totaled during the 2009 season. One of those victories came at the expense of Philadelphia on October 3, when Donovan McNabb returned to Lincoln Financial Field for a 17-12 win over the Eagles. Three of the wins he posted were over 2010 playoff teams – Philadelphia, Green Bay, and Chicago. Donovan McNabb joined his third team in three years when the Redskins traded Donovan to Minnesota on July 27, 2011. Despite leading Minnesota to five 4th quarter leads in the first six games, the Vikings managed just one victory and inserted Christian Ponder, their 2011 1st round selection, under center.

While best known as one of the top players in the National Football League, Donovan McNabb, 43, has parlayed that platform to a more broad audience. In both the profit and non-profit worlds, Donovan McNabb’s influence has risen above the playing field and into the boardroom. The portfolio of companies that Donovan McNabb has endorsed has run the gamut of food and beverage, athletic footwear, financial investing, cars, communications, and pharmaceuticals. Over the years he has trumpeted the benefits of the following companies: NFL Youth Football, Nike, Reebok,  Campbell’s Soup, Verizon, Novartis Pharmaceuticals, GlucoThin M.D., Visa, CapitalOne, DirecTV, Yardbarker, Hershey’s, IHOP, EA Sports, Sony, Pepsi, Mountain Dew, Dr. Pepper,  Vitaminwater, Cadillac, Miller Ford, Sunoco, AirTran Airways, Mounted Memories, Steiner Sports/Syracuse, and McDonald’s. What do these companies have in common? They all were willing to help Donovan McNabb achieve some greater good through their support of the Donovan McNabb Fund. The Donovan McNabb Fund, which has pledged support to raise awareness of diabetes, has raised hundreds of thousands of dollars for the American Diabetes Association and provided scholarships to many students. Donovan’s business acumen has been developed over the years. In 2002, just three years after his graduation from Syracuse University with a degree in communications, Donovan McNabb was named to the school’s Board of Trustees. He has put that degree to proper use by becoming a broadcaster for NFL Network.

Family is everything, and Donovan invests his time in being a devout husband and father.  Raquel McNabb, his wife since 2003, was also a star athlete while the two dated at Syracuse University. She now shares Donovan’s philanthropic desires and has been a catalyst for progressive action of the Donovan McNabb Fund. The couple has four children, daughter Alexis, twins Sariah and Donovan Jr., and son Devin James. In October 2009, the couple announced a partnership with Virtua hospital where each of their four children was born. The partnership began with a six-figure donation from the McNabb’s to help with the construction of the new NICU at the Virtua Voorhees replacement hospital, which opened in Spring 2011. In addition, the family committed to helping raise $2.5 million for additional funding for the project. The completed unit was named The McNabb Family Neonatal Intensive Care Unit in honor of their dedication and commitment. Donovan McNabb learned the importance of loving and protecting his family from his parents.

Donovan McNabb’s father Sam, a retired electrical engineer, and mother, Wilma, a registered nurse, continue to be a big part of Donovan’s life. They are a big part of the NFL family,  each serving at times as the president of the Professional Football Players Fathers Association and Professional Football Players Mothers Association, respectively. In those roles, they help other parents deal with their son’s newfound celebrity and wealth and provide emotional support for those young players who seek it. Sam has been the inspiration for Donovan McNabb’s support of the American Diabetes Association as he continues to battle the disease. Wilma is best known to many fans as Mama McNabb, the woman providing Campbell’s Chunky Soup to her son and his teammates. It was a role that came naturally for Wilma. After an actress played Donovan McNabb’s mother the first year, Wilma took over in 2002 and served as a spokesperson for the company for five years. Donovan McNabb has one sibling, an older brother, Sean.