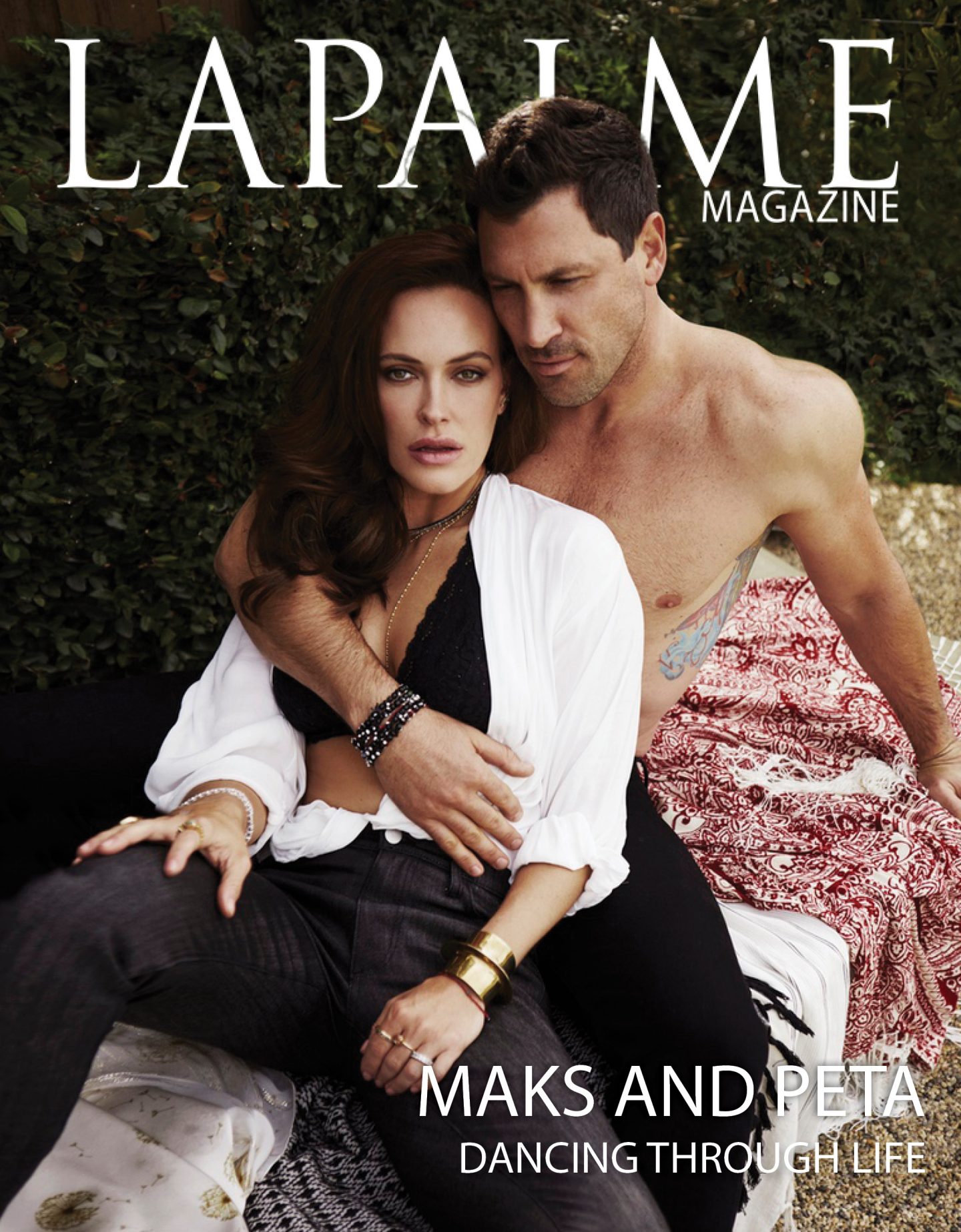 Peta Murgatroyd and Maksim Chmerkoskiy are one of America’s most beloved competitive couples. After meeting on Broadway, they parlayed their salsa dancing success straight to reality show juggernaut Dancing With The Stars. They sat down with LAPALME Magazine’s Creative Director Derek Warburton to talk about their lives together and Peta’s new romantic comedy Faith, Hope and Love.

It was a warm Tuesday afternoon in January when the LAPALME team entered Maks and Peta’s beautiful home in the Hollywood Hills. I was led into her dressing room where glam was just finishing up. Peta is a woman who needs no makeup. She is now brunette, and has an Angelina Jolie type quality to her. I have only known her as a blonde. We see each other socially at New York Fashion week and various Hollywood parties. After her warm embrace, we proceed to talk about clothes and the concept of the day. She is still high and excited off of her first feature film role as a lead in FAITH, HOPE AND LOVE (in theaters now), and is excited for the day.

Then walks in Maks, tall, dark and handsome to embrace Peta with a warm kiss. I see how our day is going to go. At first glance his professionalism and presence can be intimidating, but that all melts away when Peta is in the room. As he listens to the team explain the concept for the day he simply says, “Tell me what you need from me and I will give it to you.” and continues on with, “I will do anything for my wife, just make this shoot all about her.”

Maks and Peta first met on Broadway. Peta, born in New Zealand but hailing from Australia in her early 20’s had landed a plum role in the hugely successful Broadway production of Burn the Floor. She had toured the world since 2004 and had worked her way up to the lead by 2009 when Maks had joined. They started out as friends and Maks’ dance company even helped Peta get her working visa to stay in the US.

Then enters “Dancing with the Stars” which shot Peta and Maks to fame. Maks had joined the show in season 2 and had taken a break to star on Broadway. Peta entered the cast after Burn the Floor closed. She had huge success in her tenure, winning the mirror ball trophy twice with Football great Donald Driver and Top model Nyle DiMarco.

During our sit-down, Maks tells some incredible stories. He has had some of the most colorful dance partners in pop culture. From Debi Mazar (fabulous), Denise Richards(sweet), Kristi Alley (eccentric) and even Amber Rose, who he had a great time with, but unfortunately, Amber’s dancing background wasn’t able to help them secure the Mirror Ball trophy. However, his biggest disappointment was in season 5 with Mel B of The Spice Girls. “I was so disappointed”, says Maks. “I thought I had her at a good time, she was in incredible shape, before her marriage problems and she was there to work. We were crazy with our work schedules and we even had to learn routines in parking lots. But alas, we came in second.”

As for the wonder of “Dancing with the Stars,” both Peta and Maks said, “it is an incredible opportunity to revive and careers.” Maks adds, “the most incredible thing about the show and the reason it has lasted is because 3 generations of families can all sit and enjoy

Now Peta’s career has taken an exciting new turn into acting, “I was so scared. Not only is this my first lead role, it’s my first movie role, EVER”, says Peta. Her new film, FAITH HOPE AND LOVE premiered on March 15 and is in select theaters nationwide. Of the film, Peta says, “it’s a Christian based romantic comedy, which there seems to be a lack of.” Written and directed by Robert Krantz, the film is about two lost souls who find their groove and each other through dance. Peta plays ‘Faith Torley,’ a woman who owns a dance studio that is about to go out of business and is entering a dance competition with Jimmy Hope (Krantz) to win the $25,000 cash prize in order to save her studio. Even Maks gets in on the action by playing her ex-husband. “I didn’t see the movie before and when I went to the premiere I was worried”, says Maks, “what if she sucks?? But she didn’t suck, she was actually really great!” Even Rotten Tomatoes gave it a 100% audience score.

Along with balancing acting, and motherhood she is relaunching her blog PETAMURGATROYD.COM which she started when she was pregnant with the couples 2 year old son, Shai Aleksander. “Having a baby really inspired me to share all of my experiences as a mom, he is the light of our lives and there’s so much to talk about.” Plus, she has her tanning line, Peta Jane which has just introduced new products available at southseasskincare.com

Stylist: David Gangel at The Only Agency

Makeup: Dillon Pena at The Only Agency using STARE Cosmetics