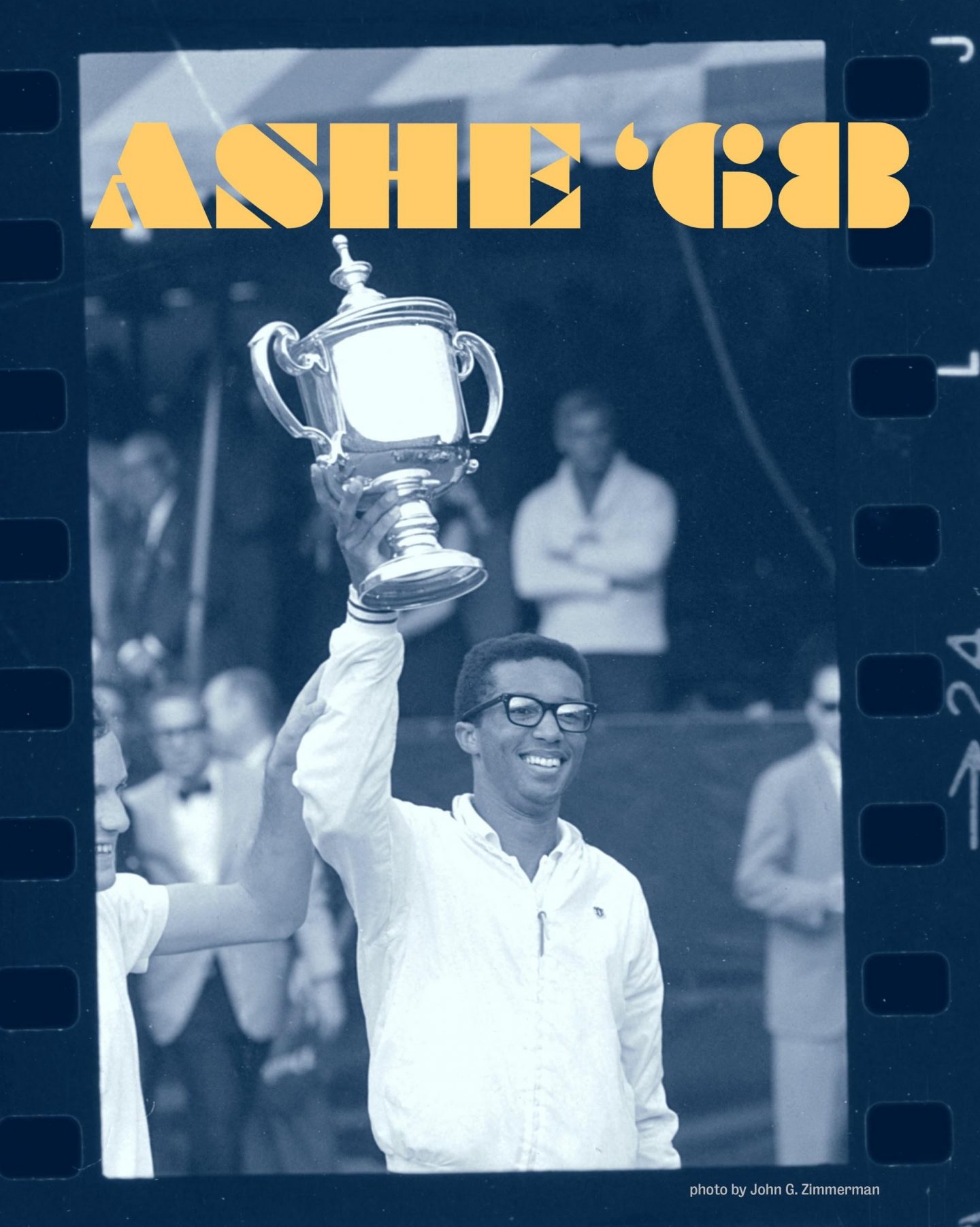 Before Colin Kaepernick, there was Arthur Ashe. In 1968, one of America’s most tumultuous years, Ashe emerged as an elite athlete who parlayed his fame as the first black man to win the US Open tennis championship into a lifetime devoted to fighting injustice. The ASHE ’68 Virtual Reality Experience brings viewers into the intimate moments right before Arthur Ashe’s historic 1968 US Open win, an event that changed his life and the course of sports history forever. From the internal pressures he felt during this turbulent cultural shift, to walking down the halls of Forest Hills’ all white West Side Tennis Club, to his historic pre-match press conference and winning match point – the viewer is right there, immersed in that historic day witnessing Ashe’s defining moment as an athlete and emergence as an activist on the world stage. This unique VR experience weaves together 360° video re-creations, archival material, and evocative, never-before-seen 360° sand animation to tell the story. The film previewed at the 2018 US Open and will travel to more top-tier international tennis events, schools and conferences after Sundance – engaging audiences with a story that blends sports and social justice into an experience as relevant today as it was fifty years ago. In partnership with The Raben Group’s Impact Entertainment division, ASHE ’68 Virtual Reality Experience will lead a robust engagement campaign designed to spur conversation about opportunity and inequality, empower individuals to advocate for local change, and create positive impact in communities nationwide.

“Arthur Ashe used his US Open Championship to advocate for social change and he devoted his life to social justice and human rights,” said Mike Jackson of Get Lifted Film Co. “Our Virtual Reality film immerses the viewer into the mind of Mr. Ashe and the challenges he faced on the day he won his first US Open.” ASHE ’68 is directed by Emmy-nominated Brad Lichtenstein of Custom Reality Services (CRS), in his second Sundance Film Festival outing (2016’s Immersive Virtual Reality Experience Across the Line), and co-directed by Rex Miller and Jeff Fitzsimmons. Oak Street Pictures’ Beth Hubbard serves as producer, with Renée Frigo as executive producer. John Legend and Mike Jackson of Get Lifted are also Executive Producers. VR Producer is Madeline Power of Custom Reality Services. Animation by Masha Vasilkovsky and Ruah Edelstein. Visual effects by Matt Kemper of Legend 3D. Original music by Vernon Reid (founding member of Grammy award-winning rock group, Living Colour) and world-ranked tennis pro Chris Eubanks plays Arthur Ashe. Michael Cleary, Peter Begley, Andrew Panter, and Alex LaCroix are also featured in the film. The Foundation for Global Sports Development, the International Tennis Hall of Fame, and Sports Illustrated are supporting partners. After experiencing this fascinating virtual reality production I was able to interview The Director Brad Lichtenstein, Co-Director Rex Miller, and Producer Beth Hubbard.

How long did it take to complete Ashe ’68?

Brad: It’s all a blur, but it took about a year and a half. It took the animators nine months to do all of the sand animation.

Beth: It is literally done in sand, by hand, on glass and we literally had to create the entire structure that it was done on.

Brad: The light table is ﬁve feet by three feet because VR is all around so you need much higher resolution. Even a Hollywood movie would be 6K this was 15.5K. To make the resolution we wanted we had to build this giant light table in the garage of our two animators and they live up in the mountains of LA and thats all they did every day for nine months.

Beth: Only a handful of people do sand animation well.

What was the most challenging aspect of the production?

Brad:One of the things that was really hard to ﬁgure out and calculate was, our DP Eve Cohen who’s amazing, had to ﬁgure out how to set up the live point scene to scale so that when we built the sand animation of the crowd it would be in proportion. So, we built a blue screen all the way around the tennis court and set the camera where it needed to be in order to achieve that kind of proportion and all also achieve that immediacy of Arthur hitting his winning volley right in front of your face.

Brad: We really wanted to try and capture that white gaze of a black man in the middle of a white world in a white sport at that time. That is still relevant today, but ﬁfty years ago Arthur Ashe was the only and he really felt that and he talks about that. All of the archival audio you heard thats taken mostly from an interview he did with a show called in the psychiatrist chair and from his dictation for his book.

How long did it take you to go through all of the audio tapes to ﬁnd the pieces you wanted?

Brad: It takes a team, right. So, because of Rex doing the documentary they were already leaps and bounds ahead in terms of the archival acquisition. There’s a woman named Hanna Shepard who’s totally amazing, she was the archival producer and she set up a spreadsheet and a database of all the archival material. For the most part everything was transcribed and all I had to do was go through all of the transcriptions and make selections.

Rex: Those audio interviews with Arthur, talking in the ﬁrst person, I found the transcripts of those at the Schomburg Center in Harlem. I was there for a few weeks and went through forty-seven boxes of Arthur’s stuff. Those were the audio interviews done for his book Days of Grace that was written by Arnold Rampersad. So, Hanna tracked down Mr. Rampersad and said “Mr. Rampersad do you think you still have those tapes”. He told Hanna, probably not, but when he checked in his attic he found them and gave them to us.

Beth: One of the things we loved was hearing it in Arthur’s words. That was really important because a lot of people haven’t heard a lot from Arthur. He played his cards quite close to his vest so you weren’t really sure who was going to show up the day of a match. But he always was calculating and he was always trying to ﬁgure out what his next move was. Very thoughtful a little bit like Obama they actually have a lot in common in the way they approach situations. What you ﬁnd is that he was listening to everyone and that put a lot of pressure on him.

With so much archival material how did you decide what would be used for this piece?

Rex: Brad was the brainchild of putting this in a 7 minute story. The bigger question that we wanted to get into was its not a tennis movie, it’s not a tennis story, it’s the origin story of a social activist. His winning the US open is what launched him to be able to have a platform cause up until that point as he says “I hadn’t won anything and no one listens to losers”. Not that he was a loser, but he was not yet a champion so the events of 1968 as we present them really help launch him to achieve his greatness; the death of Bobby Kennedy, the death of Martin Luther King, these are people he had close connections to, especially Kennedy. And then the anti war thing going on his brother was in Vietnam ﬁghting and he was living at West Point so all of these things put him in a pressure cooker. The other thing was that the 50 anniversary of Arthur winning the US open was approaching as this was getting off the ground.

Brad: Rex and I knew each other when we lived in NY 23 years ago. We rediscovered each other about 3 years ago when I was shooting a scene for a documentary. He started telling me the story of the documentary and I thought this should be in VR. As he said, that moment is transformative not only does he break barriers and make history winning the US open but becomes this platform for social activism. So, the rest of the story and how to shape it came from doing the research, from diving into all that material that we had from Arthur and trying to understand psychologically who he is. I knew from the beginning that I really wanted it to be all in his own voice. He had a very speciﬁc experience of being black in America at that moment.

Is there a larger plan for the VR experience after Sundance?

Beth: Yes, We’re going to take it on a tour, with a sponsor, we’re going to take it to museums, different Boys and Girls Clubs, and tennis organizations. Also, Arthur started something called National Junior Tennis and Learning (NJTL). He started tennis campuses all over the country and the 50th anniversary of that is next year. We want to take the message of that moment to younger audiences. The other thing it does is it puts you in the moment to know you can win, no matter what, no matter what the circumstances. If you can incorporate that moment and that opportunity into kids minds thats a huge message to take to kids and VR is the perfect immersive medium to do that.