Home » The Most Creative Fashion Week of Eastern Europe is in Transylvania, Romania 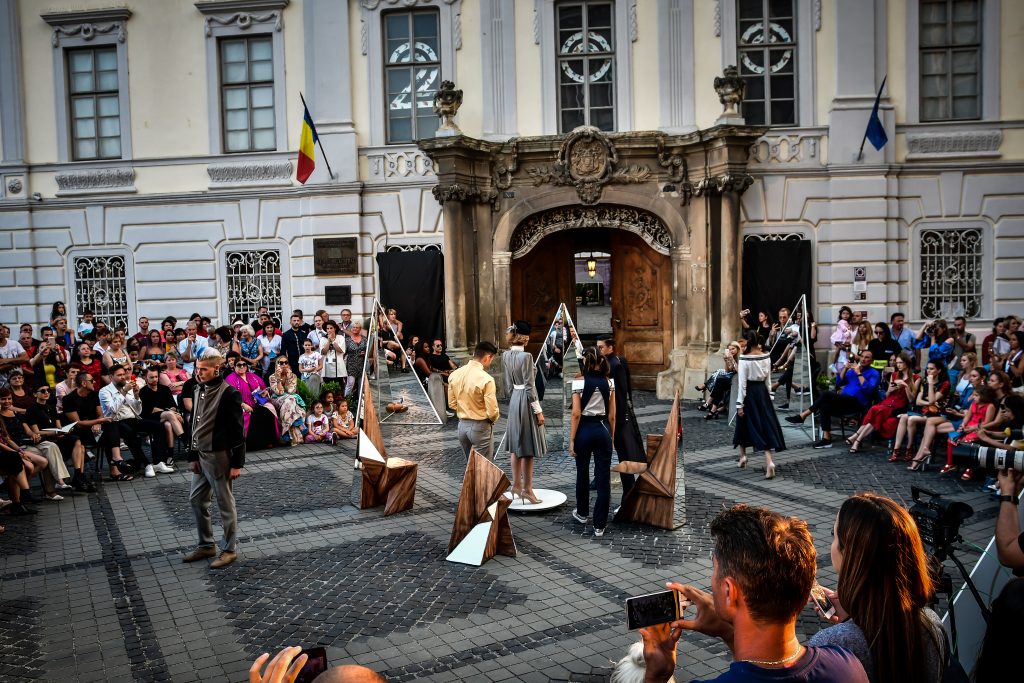 If you follow fashion, you’ll know that the greatest fashion week in Eastern Europe is Feeric Fashion Week, in Sibiu, the heart of Transylvania, Romania. Feeric Fashion Week transformed Sibiu town and its surroundings in a grand fashion stage where the newest collections of over 40 designers were unveiled to the public. Sibiu became for the 10th time the most creative fashion capital of the world. Feeric Fashion Week is famous for its spectacular catwalks in the middle of nature, castles, candies factory or other unusual places. Why is this fashion week so high profile to so many? There are a lot of reasons, like beauty, class, prestige, creative locations such as a stone quarry, a lake or a hobbit castle, and culture. In a fashion market being reshaped by digital media, rapid globalization and an uncertain economic and geo-political environment, more and more designers from France, Italy, Netherlands, Spain or China are rethinking their approach to Feeric Fashion Week in Romania. The reason is the “natural environment” strategy because of the most creative locations transformed in runways for their fashion shows. And this is not enough! Indeed, this concept of fashion week is in flux in terms of target audience, format, high-quality production, timing, duration and geography. Many designers decide to shoot their campaigns once they showcase their collection there in such beautiful locations like lakes, stone quarries, museums, royal gardens, cathedrals, forest, hobbit castles built on clay and sand and the list can go on. 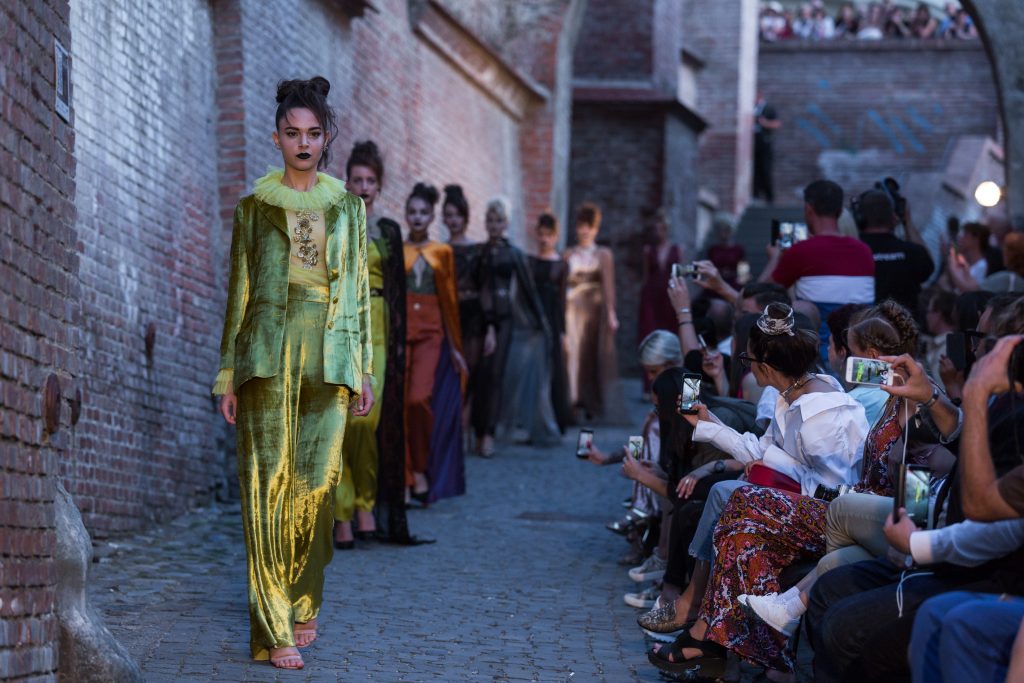 Designers to keep an eye on at Feeric Fashion Week

Local and international designers showcased their collections in unusual places and we selected some to keep an eye on. The festival started on July 17th at Tauni Winery, the domains of Jidvei, the festival’s main partner: Tăuni Winery was the spectacular place where Irina Duţu Zgâia presented a collection inspired by Lewis Carroll’s book „Alice in Wonderland”. Irina Dutu Zgaia graduated at UAD Fashion University from Cluj-Napoca, clothing design department, and she has a special interest in deconstructed forms and prefers techniques that involve manual intervention. She loves reading stories for children, and from this magic she is inspired to create. Her last collection presented at Tăuni Winery is called “As mad as a hatter” and contains 18 looks. “In my collection,you can recognize Alice with oversized bands, the Crazy Hare with the typical British eccentricity, the White Rabbit constantly watching the pocket watch, the Rough and Sober Time, and the Red Heart Queen. The collection is meant to be a celebration of the beautiful madness of each of us, being the result of a serious adult work that every day enjoys the fact that its childhood has survived, “said Irina Duţu Zgâia.

Feeric Fashion Week made space also for the creations of the students from UAD Cluj-Napoca (University of Arts and Design from Cluj-Napoca) at Redal Expo, the main venue. The one that opened the series was Evelyn Lorincz , with “Notorious”  collection that is defined by elegance, art and glitter addressed to young nonconformists. Ana Barbosu continued the series of the shows with a collection for the whole new generation, which included army influences and green shades with subliminal messages. The white and blue stripes also dominated the Feeric Venue, where Maria Catalina Culda presented her works whose key points is the digital continuity, then Sorana Oltean , inspired by the hip-hop culture, brought a collection that wants to mark the attitude. The latest fashion show at Redal Expo belonged to Diana Dobrescu , whose concept was based on “the month in the last square meter”.

Through Romanian designers, we loved a lot Nous Mode’s collection, showcased on a spectacular lake where models could be shown inside boats. At first glance, the show seemed to be a playful show on a different kind of runway. The amazing collection is about classically based looks: easy casual shirts with print details and classic pants for menswear, playful long gowns with accentuated seams and wrap waists for womenswear. At the same time cut looks printed with technical drawings, jackets and pants accessorized with zips.

To keep an eye on Aida Lorena, romanian designer who showcased a playful womenswear collection with sophisticated silhouettes. Gently elegant, Aida’s many draped and airy soft looks are crafted from fine fabrics like silk and cotton. The must-have is the hand-made jacket with embroidered crystals.

Thought one of the most interesting Romanian designers was also Luna Morgaciova, who notably brought painted elements on her looks for Fall Winter 2017 Collection at Feeric Fashion Week. The designer’s shocking pop elements with the color contrasts dominated the catwalk, while patterns of suns, puzzle pieces, oversize sweaters and pierced elements added a celestial, fortune-teller-ish influence to the collection.

Adriana Goilav’s collection caught our eye too, presented on a mobile catwalk between old trains and railways at Feeric Fashion Week. It opened with black and white, classically based looks — white shirts, black pants and skirts — with playful zips. Sporty utility jackets and pants were accessorized with symbols and zips. Jackets transformed in skirts and skirts transformed in bags are some of the collection’s strengths.

Modement from Hong Kong showcased  their newest collection “Soulmate” during the Feeric Fashion Week in Sibiu Romania in a magical location, the Hobbit Castle, built out of clay and sand. The collection is for both, men and women,Inspired by the bible phrase regarding the creation of Eve from Adam’s bone and flesh, the designer Sin brings together different colours and silhouettes creating a collection that portrays the process of finding each other. Keeping loyal to her signature androgynous and unisex concept. The different textures and weaving represent the bones curving and transforming into something. Connotations are made to blood vessels with the specially crafted fabrics. Sin believes that we no longer live in a world where fashion is about size, fashion is about style and the ability to mix and match in order to find the fashion that is themselves. Thus,Sin keeps her designs simple with interesting elements that create the sparks for bonding. The last key piece is a beautifully weaved outfit, showing that the different elements have mixed and match in order to come together at last. Sin commented “My collection is about finding the Soulmate, the last piece has been weave because they have merged, In the bible when couples marry we say that they have become one!”

Another spectacular show belonged to the romanian designer Bianca Popp, who presented the FW17 menswear and womenswear collection at Boromir Factory, on the music of the Academy of Army Forces Academy “Nicolae Bălcescu” in Sibiu, institution that also made the decoration of the fashion event at the Boromir factory, a decoration loaded with military elements like army vehicles or combat equipment. The collection included looks for both genres, men and women, creative monochrome patterns that followed architectural lines and volumes, being made up of unconventional materials. Bianca Popp showcased also a preview of her SS18 Collection made by fine fabrics and patterns inspired by the architectural geometry.

Charles & Ron showcased also their FW17 womenswear collection at Boromir, candy puffs factory. The colour palette for this collection was inspired by a Mediterranean winter sunset. Deep Sea Blue, Madonna Blue, Sunset Pink, Lilac Sky and Silver are the colours used that reflect this natural spectacle. They are highlighted with black, which is a staple in the Charles & Ron  collections. Hand beaded dolphins and hearts are used to embellish several designs and the Charles & Ron red and white gross grain ribbon is this season featured in a graphic print. Fabrics range from Silk to Wool and Velvet and a beautiful custom made Jacquard fabric in metallic blue and black also features the Filigree dolphin pattern. The shoes also were designed by Charles & Ron and their look is completed with handcrafted Maltese Filigree jewelry.

One of the strengths of this fashion week it’s definitely its locations: under the direction of Mitichi Preda, a team of international photographers, video makers and producers transformed, each time, the most random places in catwalk-ready settings. We cannot wait to attend the next season of Feeric Fashion Week. – article by Myra Postolache @myrapostolache 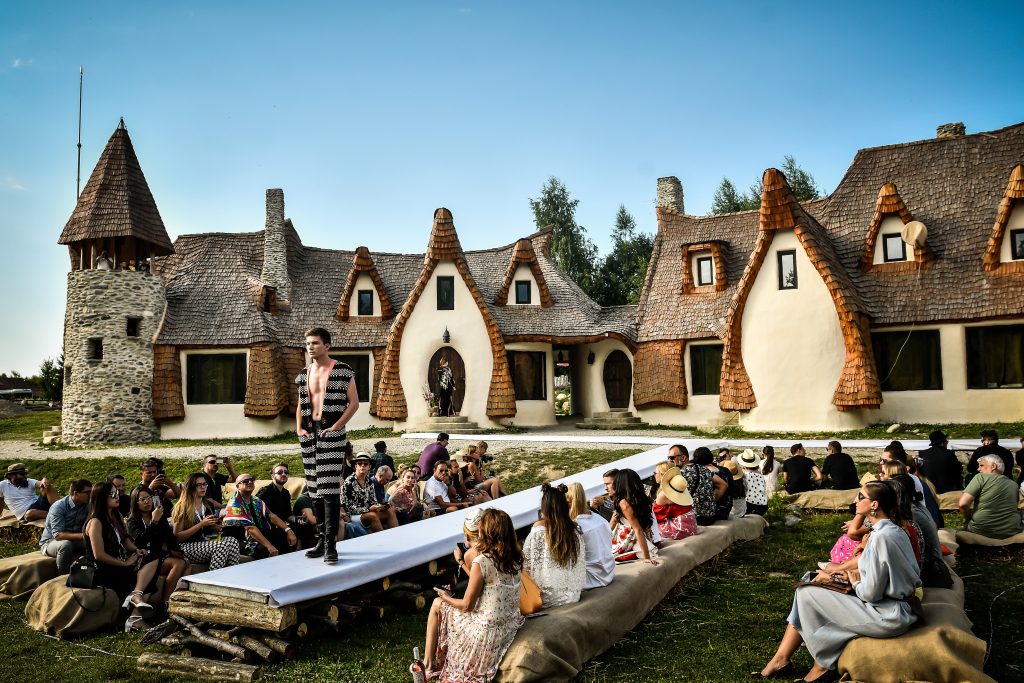