Home » JERRY O’CONNELL – THE SMILE YOU LOVE TO WATCH 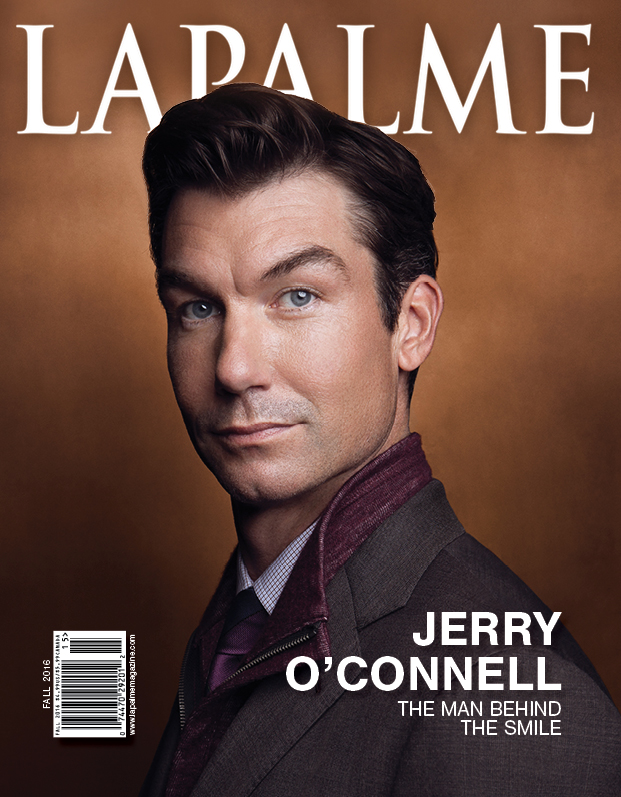 Jerry O’Connell is one of Hollywood’s most recognizable faces. His big smile, his thick hair, expressive eyebrows but most of all, his sheer genuineness. With a plethora of new projects on the rise: a movie, a mockumentary series, directing, being the voice of Superman, his appearances on Billions, Mistresses (he’s also directed two episodes) and his newly announced role on Season 2 of Scream Queens (working with Ryan Murphy, a man he’s wanted to work with since the early days of Nip/Tuck), he also happens to be a devoted husband to wife, Rebecca Romijn and father to their twin daughters, Dolly and Charlie. 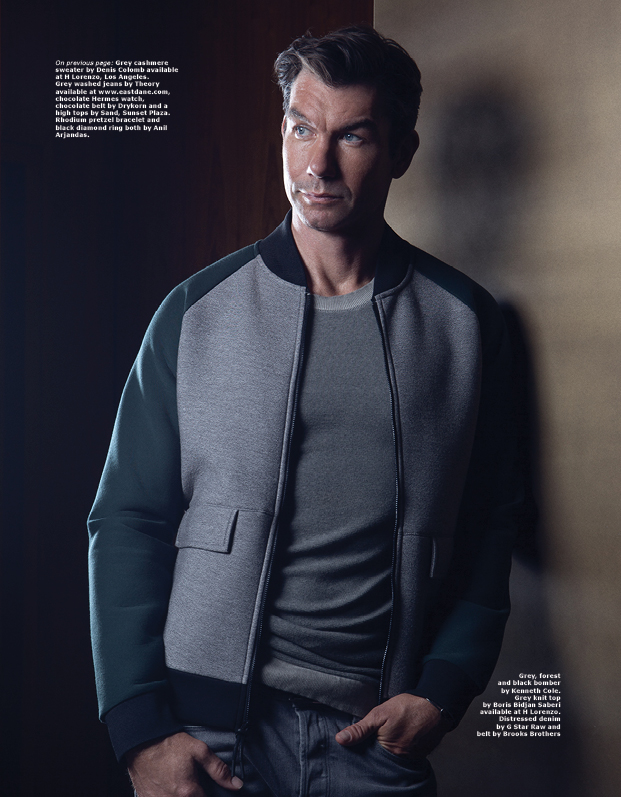 Growing up in Chelsea, New York to a mom and dad heavily steeped in the art world in some form or fashion, he and his brother were surrounded with creativity and an environment that fostered their individuality. All of which made him the “go with the flow” kind of guy he is today. Jerry’s first big Hollywood break was in Rob Reiner’s “Stand By Me”, which just celebrated it’s 30-year anniversary! An experience, he’ll tell us, that shaped him as an actor and director. Now that he’s landed roles on so many phenomenal shows, we wanted to get a little personal. LAPALME MAGAZINE: Growing up with parents steeped in art, do you think their creative approach influenced your 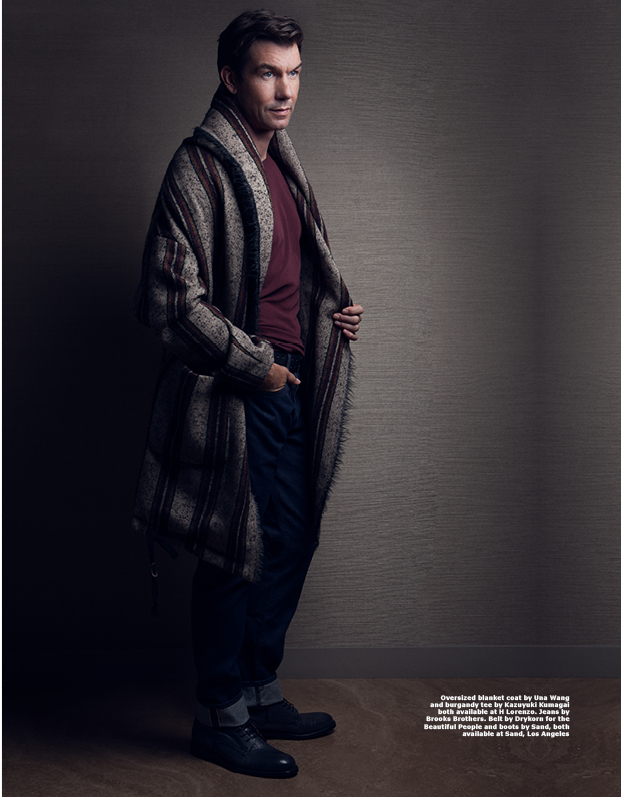 acting? JERRY O’CONNELL: It was the 80’s and Chelsea was Bohemian New York! Everyone around me were Warhol-like characters, we lived in an artist’s loft in an artist community at the Chelsea Hotel so I was surrounded with amazing people all the time. When I was a kid, I went to Clinton School for Writers & Artists and the Herbert Berghof Studio for acting, which was a really open environment. It was a lot of fun. As a kid, we lived right where the Halloween parade would begin so every year, everyone in my building would wear crazy costumes. It was just a really cool place to grow up! LM: With the film Stand By Me recently celebrating it’s 30 year-anniversary, what was that experience like now that you look back on it? Is there anything you would want to do that would be a take on that? JOC: It’s funny, I was on twitter and the whole idea that “Stand By Me” was 30 years ago, it’s crazy that it’s been that long – I’m gonna be in a walker soon! I still can’t believe I got to be a part of that. There were some big people in that movie. I mean Corey Feldman had just done Goonies and I couldn’t believe I was doing a movie with him and Kiefer Sutherland. It was amazing – now I watch it and still am so glad I got to be a part of it and that I got to work with River too, makes me sad to think about him. Working with Rob Reiner was the best though. Seriously, he was like one of our friends. Every day I got to work with a bunch of my friends and learn and grow and see the way he did things. It taught me a lot
and now, makes me want to direct and work more with kids. LM: Speaking of working with kids, you have an ABC movie coming out, “Mermaid’s Tale”. JOC: Yeah, I get to work with kids in the film! It was a lot of fun. I remember being young, working on a big movie with a director that made it a positive experience and that’s what I wanted to bring to this movie. I was so happy to be involved and hopefully be a part of creating good memories that these kids will always remember. 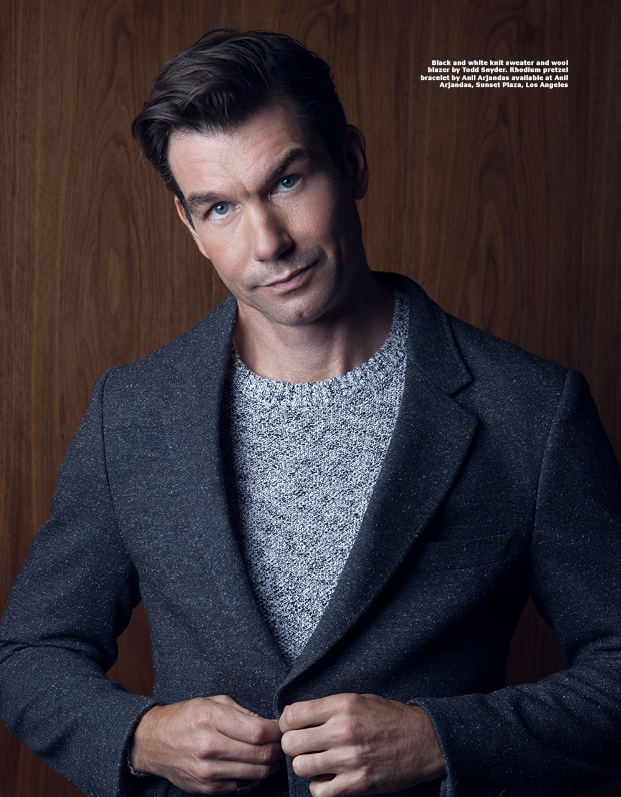 LM: Ok, let’s talk about the 5th Quarter! A mockumentary series reprising your role as football player Frank Cushman from Jerry McGuire. What do we have to look forward to from this untrue made up sports series? JOC: Streaming this year on Verizon Go90, 5th Quarter is a crazy fun concept. I have to say that it’s such an exciting time for TV now. All these young filmmakers are creating really funny material in short format for online content. It’s where so much talent comes from and super funny concepts begin. Ok, so my character, Frank Cushman, now a successful football player, is addicted to product endorsements. He does these 30 for 30 dramatic sports segments plus commercial after ridiculous commercial. It will be highly entertaining to watch. LM: You play the role of Steven Birch on Showtime’s, “Billions”. Any chance we’ll get to see him get back at US Attorney Chuck Rhoades? JOC: I really hope so! When you’re in a scene with Paul Giamatti and Damien Lewis, there is no higher rung in the acting circle. It just doesn’t exist, it’s an honor to be there with both of them. When you’re on set, you speak when spoken to, you can’t believe you’re there. It’s true greatness. I hope I’m back next season!

LM: You are also on Season 2 of “Scream Queens”! Can you tell us about the character you play?

JOC: I finally got in! A real testament that you stick around long enough, they put you in something. I’ve been such a Ryan Murphy fan since he started. I’ve auditioned for years and pursued jobs on his shows but nothing ever stuck until this role came along. Finally, Brad Falchuck cast me and now I’m working with two guys I’ve always wanted to work with! They do things old school. You have to pick up the scripts just prior to shooting so we are in as much anticipation as the fans. The whole cast and crew are the coolest, plus they all actually look cool too!

LM: We loved seeing you Guest Host with Kelly Ripa. Ever want to add Talk Show Host to your repertoire in the future?

JOC: I would do anything Kelly asks. She is the sweetest. I aspire to be like her as a parent and have you seen her kids? The are most attractive, best looking kids around! I loved hosting with her. I’m in awe of her, she has it all figured out as a parent. It’s incredible to see how she’s found balance with career, marriage and parenthood.

LM: Tell us something about you most people don’t know?

JOC: At my best, I was ranked 17th in the US for NYU at the NCAA Saber Fencing Tournament when I was in college. Had I really stuck with it, saber fencing, I probably would have made it pretty far. I still talk to my coach, who happens to be US Olympian, Steve Mormando. It was an experience I’ll never forget. I really enjoyed being part of a team, traveling the world, and competing. And then, I fell in love with acting … 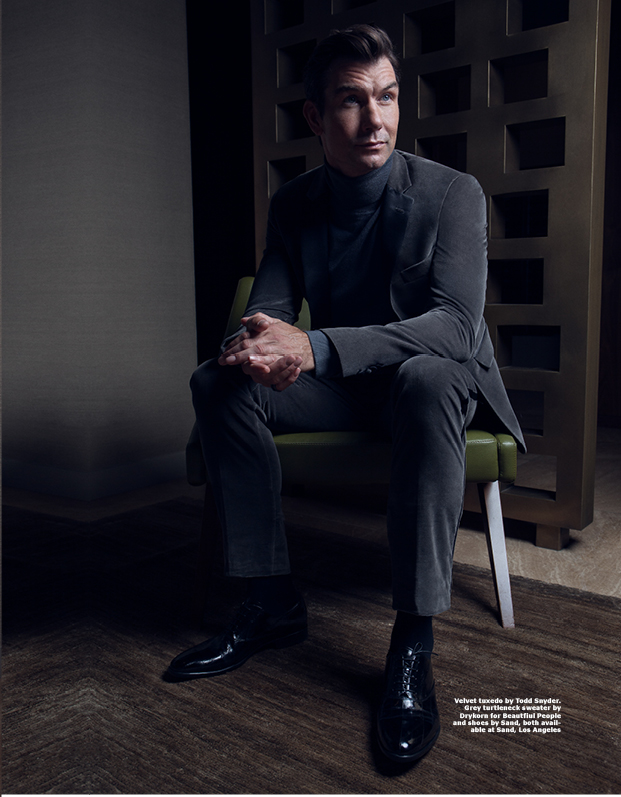 LM: How has your experience been directing “Mistresses”?

JOC: Initially I met with John Scott, he’s a prolific TV Director and I shadowed him on that show first. So when it came time to
direct two episodes with Jun Yin? I was ready. She’s so much fun to direct! She’s so huge as an actress but still innocent and her characters are always embroiled in crazy situations. She’s always game, even when we’d change stuff up on her. It’s a blast directing, acting and working with the entire cast!

LM: Best advice you’ve been given in the business?

JOC: Crazy long story; when I was in Stand By Me, first day on set, I was in a scene and I wasn’t really reacting to it, Reiner said, “CUT! Why aren’t you reacting to it?” I told him I didn’t really feel like I was part of the scene because I didn’t have any lines. Reiner explained to the 11 year-old version of me, “You’re as much a part of this as anyone else, you gotta listen to every word.” When you work in TV in an ensemble and you don’t say anything, sometimes it’s your best work if you do it right because like Reiner said, you gotta listen to all of it, to everyone.

LM: Lastly, you are married to the exquisite Rebecca Romin and have two twin girls. What is one of your favorite things to do together as a family?

JOC: Well, one thing is my kids have gotten good at is eating out. They’re well mannered and super polite. Nothing makes me prouder then when someone says, your kids have great manners. The other thing I love is we go Karaoke as a family.

JOC: My kids sing Bieber, “Sorry” and stuff like that, I can sing a little Steely Dan, but Rebecca can rock the Eagles song, “Hotel California”. Honestly, I’m along for the ride, putting in songs to watch my girls have fun singing. I will say that I have a resolution: I want to travel with my family more, let them to see the world.

And we can’t wait to see the pics of your adventures on Instagram! You can catch Jerry this fall on ABC, FOX, Verizon Go90, hopefully hosting a few more shows with Kelly, directing, writing, you name it. The man does it all. You won’t meet a nicer guy and we loved getting to know more about him. 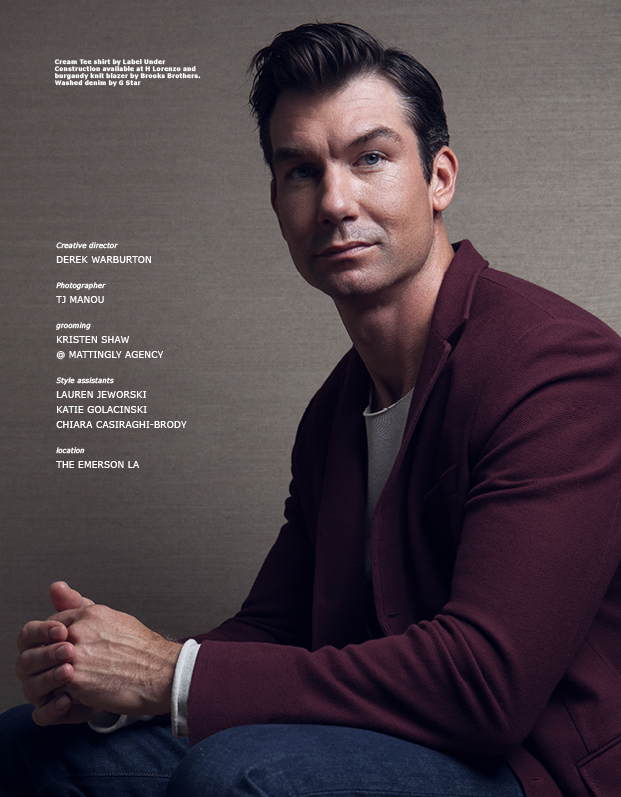 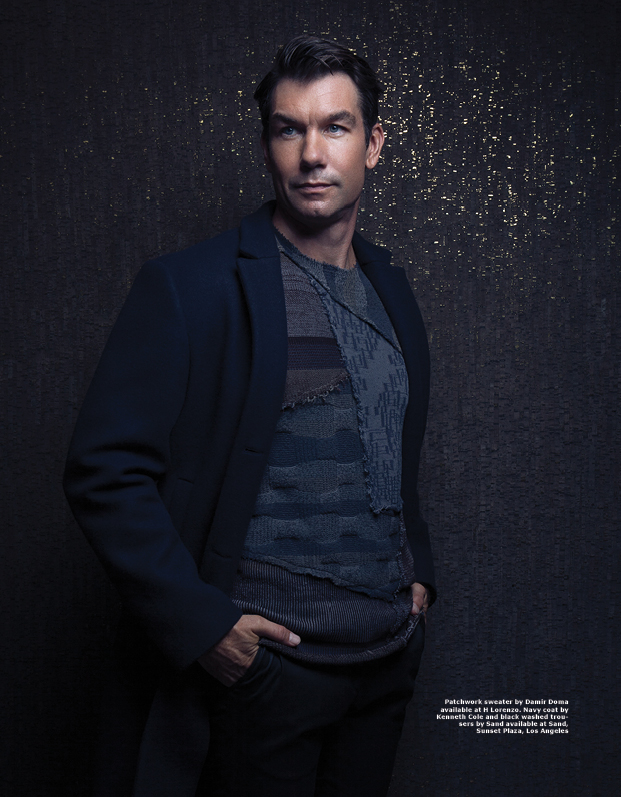 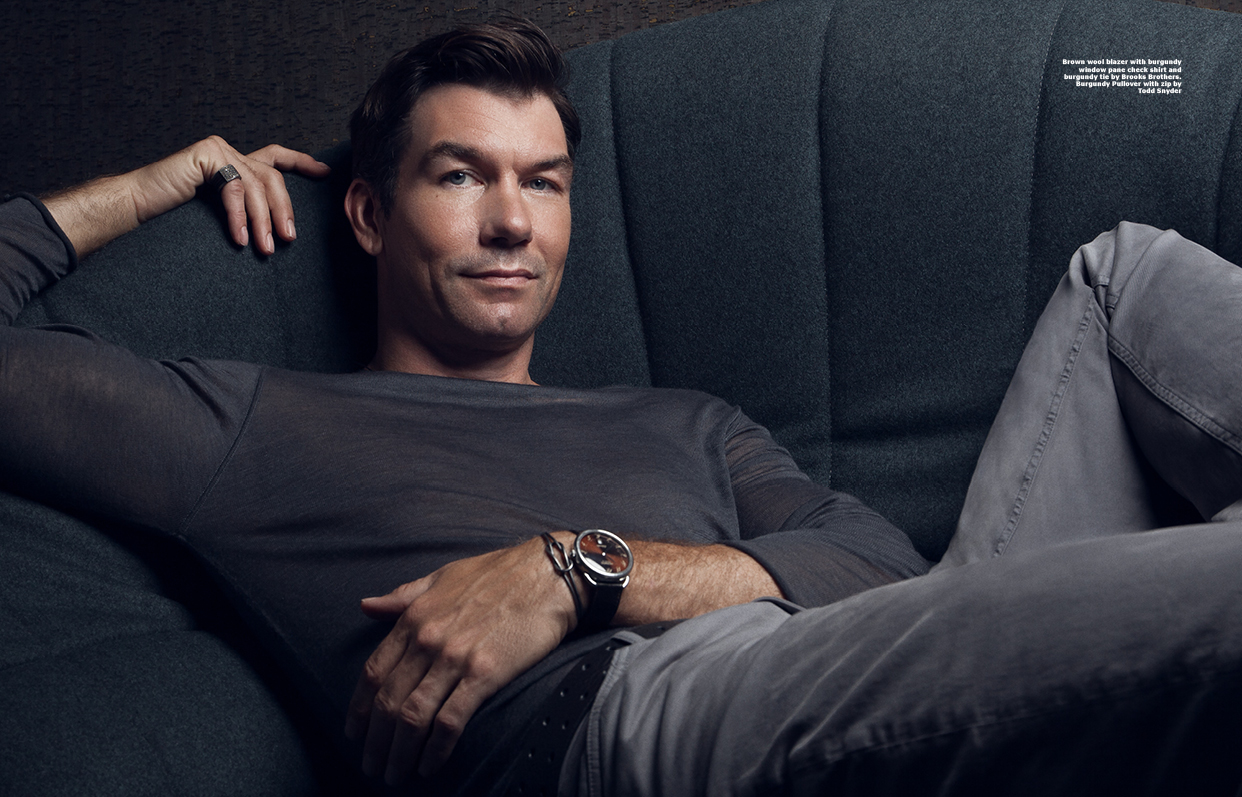 Latest posts by Administrator (see all)