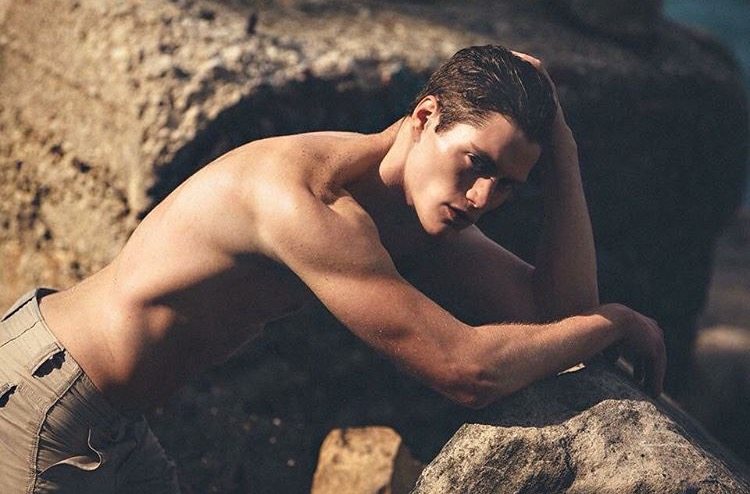 25 year old model Edward Harrington was born and raised in Chicago, Illinois. Signed with Dragonfly Agency but discover on Instagram, Edwards social is flooded with motivational sayings and recent photoshoots. I caught up with him to discuss work, inspiration and how he keeps it altogether.

LJ: When and why did you decide to become a model?
EH: It all started a couple years ago when I went in to get a haircut from David at The Menz Room. He had just opened the salon and was having a runway to celebrate the opening and he asked me to be in it. Honestly, my first thought was “Hell no” but I had never done anything like it before so I figured why not give it a try. I ended up having a lot of fun doing the show so I did a photo shoot to give it a try… 40 pounds lighter and a couple months later I was found on Instagram, got signed, and was off to NYC shortly after followed by Milan. So I’m glad I decided to give it a try that day in the salon.
LJ: On your instagram, you post a lot of inspirational messages. Where do you get your motivation from?
EH: I gather motivation from anywhere that I can. I’m always looking for something new to charge me and I’m always looking to get better. For me, that means finding something new every day to keep me motivated and to keep me progressing. However, the reason I post them isn’t just a reminder for me, it’s to show others to stay motivated because we all have rough moments or excuses but that doesn’t mean you should slow down working for what you want.

LJ: Is there a specific campaign or shoot that you are the most proud of? A memorable shoot?
EH: This is a tough one for me because I have had so many memorable shoots and have met so many amazing people but at this point in my career the most eye opening shoot for me is when I shot with Giampaolo Sgura and Miguel Arnau for Hercules Universal. It was the first big set that I was on and I can still remember looking around the studio before hair and makeup and seeing all the historic photos that had been taken there. Once I was dressed I remember Giampaolo showing me the idea he had and from there it was like playing a character. It all happened pretty fast but I met some really amazing people on that set and have stayed in touch with some of them which always makes it more memorable for me.

LJ: Where do you see yourself in 5 years?
In five years I’m not sure where I will be living or what brands I will be working for, I just know I will still be a model because I love this lifestyle, the people I meet, and the experiences that I have that are like nothing else in the world.

Want to know how Harrington stays in peek condition for shoots? This is what a daily diet looks like in his world:
Breakfast:
-Egg whites in a carton mixed with hot sauce.
Or
-Pancakes by mixing 1 scoop of protein powder with egg whites.
-Avocado by its self.
Lunch & Dinner:
Buy a couple pounds of boneless, skinless chicken breast and make it in a crock pot with how sauce or lemon juice and pepper. Add Chia seeds and flax seeds.
Snacks:
-Greek Yogurt for its probiotic properties.
-Almonds.
-Peanut butter or almond butter in moderation.
-Carrots or celery with hummus (go crazy on this, you can pretty much eat as much as you want).
-Sliced turkey breast in moderation (high in sodium).
His tips:
“You want to try and eat every two hours. If you only eat a couple times a day your body will retain most of the food as fat because it doesn’t know when it will receive more so the body stores your food as fat for energy later. If you are eating every two hours the body knows that it has more food coming in soon so it will burn off what you are eating faster and use it as energy so we can make room for the food coming in.
Hot sauce and ground black pepper are great to add to anything because it’s zero carbs, zero fat, zero sugar, and speeds up your metabolism.